Eric Holder and All Political Prisoners 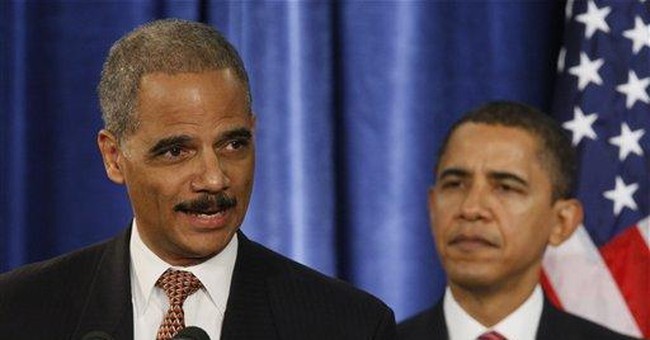 Conventional wisdom last week decreed that President-elect Barack Obama had done such a fine job culling his Cabinet that only one pick -- Attorney General-nominee Eric Holder -- would present a problem, but most likely, a surmountable hurdle.

New Mexico Gov. Bill Richardson -- Obama's presumptive commerce secretary -- stepped on that happy tale when he withdrew his name from consideration Sunday in the midst of a federal corruption probe.

Inside money would bet that Republicans will use Holder's Jan. 15 Senate confirmation hearing to grill him on his role in President Bill Clinton's notorious last-day-in-office pardon of fugitive gazillionaire Marc Rich. Rich, you may recall, had been hiding in Switzerland (while his wife had been donating generously to Clinton causes) as he evaded copious charges for fraud, evading more than $48 million in taxes, racketeering and trading oil with Iran in violation of a U.S. embargo. It was then-Deputy Attorney General Holder who gave Clinton cover when he told Clinton that he was "neutral leaning positive" on the Rich request for a presidential pardon.

With that big target on his chest, Holder is not the person you would expect Obama to pick to serve as America's top lawman. But Obama said he chose Holder because he is "deeply familiar with the law enforcement challenges we face -- from terrorism to counter-intelligence; from white-collar crime to public corruption." Too true.

A story in the Hartford Courant on Dec. 28, 2008, however, suggests that Holder has more than the Rich pardon to regret. Holder also will have to account for his role in the 1999 Clinton pardons of 16 Puerto Rico independence terrorists, most of them members of FALN, the Spanish acronym for Armed Forces of National Liberation, which staged some 130 bombings in the United States from 1974 to 1983.

Why did Clinton remit fines or commute the prison sentences of convicted terrorists? Cynics believe that Hillary Rodham Clinton's novice run to represent New York in the U.S. Senate was a motivator. Clintonia denies it, although Hillary Clinton did meet with advocates for these self-styled political prisoners.

The Courant story notes that four of the 16 pardonees were convicted for their role in a $7.2 million robbery of a West Hartford bank in 1983.Yet: "None of the four was pressed by the Justice Department to provide information on the whereabouts of the never-recovered money or three participants in the robbery, including Hartford native and inside man Victor M. Gerena. Such pressure is a common precondition for amnesty."

What's more, none of the 16 had applied for a pardon, because they refused to acknowledge U.S. authority.

A month later, Clinton commuted their sentences as the prisoners re-leased a statement, suggested by Holder, that supported "a just and dignified solution to our colonial problem." It also noted that in liberation processes, there are "innocent victims" on all sides.

Rich and the Puerto Rican political prisoners have two things in common: They were clearly unrepentant; and they were so well connected politically that they got out of jail free anyway.

Former New York prosecutor James Comey wrote to the Senate Judiciary Committee that the outrageous Rich pardon "may actually make" Holder a better AG "because he has learned a hard lesson about protecting the integrity of that great institution from political fixers." Maybe. Or maybe Holder is the consummate political fixer.