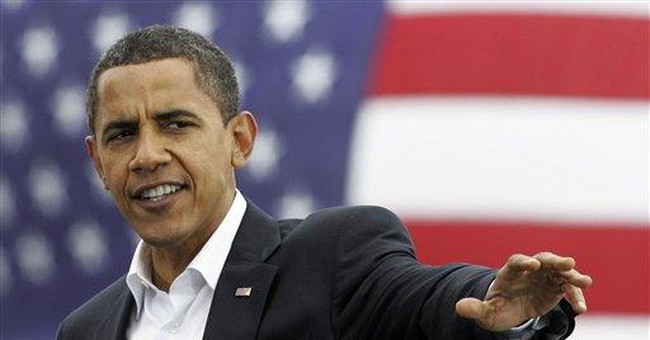 Fiora from Chicago asked: "What sacrifices will you ask every American to make to help restore the American dream and to get out of the economic morass that we're now in?"

Teresa Finch asked: "How can we trust either of you with our money when both parties got us into this global economic crisis?"

Both questions touched on the new political post-bailout reality: That is, White House hopefuls may promise Americans more government for lower taxes, but the next president is going to have to tell his party and American voters that they can't keep enjoying something for nothing. Or the next president will just dig the big hole deeper.

In answer to the question on sacrifice, Democratic presidential nominee Barack Obama berated President Bush for telling Americans, after the Sept. 11, 2001, terrorist attacks, not how they must sacrifice, but instead to go out and shop. Then Obama failed to cite a single sacrifice he would suggest.

This is the closest Obama came to proposing that Americans give up anything: "There is going to be the need for each and every one of us to start thinking about how we use energy." He would not say that people actually need to cut back on their energy use, by, say, carpooling or taking transit. Nothing real.

For his part, GOP presidential nominee John McCain did make it clear that Americans would have to sacrifice "some really good projects," as he would eliminate earmark spending, and not just for extravagant or wasteful pet-spending projects. Also, McCain proposed an across-the-board spending freeze on federal spending -- exempting defense, veterans affairs and some other federal expenses. McCain did tell voters that they would have to give up something -- not just think about it.

Some pundits have panned McCain's call for a commission to reform Social Security and Medicare spending as politically meek. Not fair. McCain bluntly stated during the debate, that reforms would mean, "we are not going to be able to provide the same benefit for present-day workers ... that present-day retirees have today."

Maybe "the old John McCain" would have said more, but the new Barack Obama never says anything people do not want to hear. He criticizes Bush for deficit spending -- then promises tax cuts for 95 percent of American households.

I have never seen Obama tell people what they'll have to give up. All of his policies create jobs and lower taxes. In answer to Finch's question about bucking his own party, McCain should have spoken about the man whom journalists have covered during this administration -- the maverick who bucked Bush on the pork-laden farm bill, the special-interest bonanza energy bill, the underfunded Medicare prescription-drug bill, and who told Bush to boost the level of U.S. troops in Iraq before the surge. Most recently, McCain infuriated Wall Street Republicans when he said he would fire Bush Securities and Exchange Commission Chairman Christopher Cox.

For his part, Obama never addressed where he would challenge his party, because he never does. According to Congressional Quarterly, Obama votes with his party 96 percent of the time.

Now I expect Obama to agree with many Democratic policies -- but if he cannot say where he would control spending in the Democratic-led House and the Senate, hold onto your wallets, folks. The Senate could not approve a $700 billion bailout bill to save the U.S. economy without larding it with an additional $110 billion in money the government does not have.

It would be nice to know if Obama has the resolve to curb his party's excesses. To go by his Nashville performance, he does not.