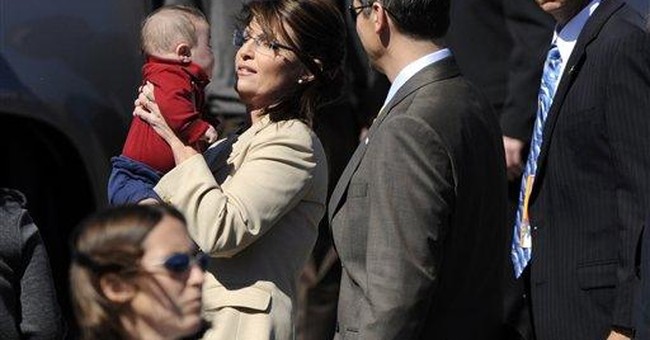 ST. PAUL -- Sarah Palin is different. Too different. Few Beltway insiders thought Republican nominee John McCain would pick her as his running mate. She is not a Washington staple, like the Democratic veep pick, Joe Biden, whose mistakes are established facts that are as worn as a pair of old shoes.

She is a runner -- which is standard among modern politicians. She is a hunter -- which is not. She did not move up through the usual cursus honorum of the standard running mate added to a ticket to establish gravitas. McCain didn't need to weight his ticket. So he chose an upstart. He took a risk.

To the Washington press corps, that means she was "not vetted." This gives the press corps a grand excuse to tear Palin and her family into little, tiny pieces.

News reports question how voters might feel about a mother of five serving in the White House. Because Palin's elder son, Track, is about to be deployed to Iraq, she would not be raising five children in the vice president's residence. So why mention five? Because five is three too many. It's not the norm.

With a fisherman/oil-worker husband, a son in the military, and a daughter in high school about to start a family, Palin safely could be called "working class." Except that the cognoscenti don't know how to deal with real working-class people. They think Biden is working class -- he must be, because he grew up in Scranton, Pa.

"Ms. Palin appears to have traveled very little outside the United States," the New York Times reported. Again, this rankles journalists, who believe that politicians must share their zest for tourism. How disappointing, then, that Palin did get a passport in 2007, not to trek the Himalayas or walk through the back doors of quaint European villages, but to visit members of the Alaska National Guard stationed in Kuwait, as well as wounded troops in Germany. (I suppose it would be a cheap shot to report that Obama did not visit wounded troops in Germany.)

Palin is a walking style crime. She was a beauty queen. She wears a beehive hairdo. She hails from a small town. She believes there should be debate about teaching creationism in public schools, but she opposes "explicit" sex education. She is so unlike the tolerant brainiacs who report America's news that they just have to comb through her personal life in search of all the details that shout that Palin would not fit in at their cocktail parties. You read it here first -- she is a freak.

In our high-mindedness, we target Palin's hamartia -- the term in Greek drama for the fatal flaw, born of ignorance, that brings on the protagonist's downfall. In this case, Palin's opposition to sex education in public schools invited the wrath of the gods upon Palin's hearth, and all but impregnated her daughter Bristol.

What enrages the press corps here the most is the fact that Palin -- like Obama -- is a bit of a risk. And a needless risk because candidate McCain could have treaded in safer waters by picking a running mate whose hand the press corps already had stamped.

I'll grant that Palin is a risk. She may falter, or -- like Obama -- she may have a magic appeal to voters. In this choice, McCain risked the race, but not the nation, secure in the knowledge that voters know leadership when they see it.

Or as Palin said when McCain named her as his pick, "A ship in harbor is safe, but that's not why the ship is built." And please, spare me the outrage and expressions of disappointment in McCain's judgment, because he made a political decision when he chose a running mate. McCain has made unnecessary risks before -- as in, when he pushed for comprehensive immigration reform and the troop surge in Iraq.

The problem with equating judgment with not taking any risks -- the problem with demanding that leaders take no risks -- is that you end up not with leaders, but with gutless politicians.