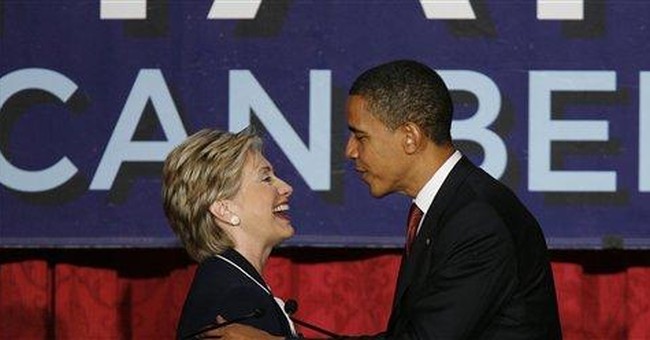 Hey, it's politics. In the primary, when Barack Obama wanted to connect with his party's disaffected left, he said that he would support a filibuster to stop a reauthorization of the Foreign Intelligence Surveillance Act if it granted retroactive immunity to telecommunications companies that had cooperated with the federal government after the 9/11 attacks.

Now Obama has those voters in the bag. So he is reaching out to the majority of Americans who want aggressive international surveillance to prevent another terrorist attack.

And the average voter certainly isn't going to lose sleep if the price of that security is that the ACLU does not have carte blanche to sue AT&T for cooperating with the government.

Wednesday, Obama was one of 69 senators who voted for the FISA bill that provided retroactive immunity to the telecoms.

Obama called it "compromise." For his part, Obama also voted -- wrongly, I think -- in support of failed amendments to limit retroactive immunity. But at least he showed up to vote -- which is more than you can say for John McCain, who was too busy campaigning. (It's true; McCain knew that if he skipped the vote, the FISA bill would pass overwhelmingly. Still, the Arizona senator passed up an opportunity to show the public his support for tighter national security.)

The passage of the bill brings to the fore the constant dynamic in Democratic politics during the Dubya years. Leading Democrats have used the wiretapping issue to discredit George W. Bush in a successful bid to lather up the lefties and win control of Congress. Now in power, they give Bush what he wants -- on war funding and now the wiretap bill.

An open letter from 23,000 Obama supporters who had urged him to vote against the FISA bill asked the "change" candidate to at least make good on his pledge of a comprehensive review of the wiretap program, to revisit the bill if elected, and to "promise to use the full power of the presidency to expose the truth. A full investigation of Bush's illegal 'terrorist surveillance program' needs to be conducted by your administration."

Translation: If Obama promises to beat up on Bush from the Oval Office, Obamaphiles can overlook a vote that, to them, sold out their civil liberties.

Which they really, really care about. The ACLU contends that the FISA Amendments Act is unconstitutional. Although the measure "prohibits the government from intentionally 'targeting' people inside the U.S.," read an ACLU statement, "it places virtually no restrictions on the government's targeting of people outside the U.S., even if those targets are communicating with U.S. citizens and residents."

Don't we want U.S. intelligence agencies to spy overseas? Isn't that what they're for? I asked ACLU attorney Melissa Goodman. She replied, "We think that the courts should be involved."

Bill language of course prohibits targeted surveillance of Americans without a warrant. Not good enough, Goodman argued, because "targeted" is not defined. The ACLU wants the courts on top of the safeguards of inspectors general and congressional oversight.

The ACLU warned that journalists could be targets, too. Goodman noted that in 2002, the FBI knocked on the door of author Lawrence Wright, as he was researching his Pulitzer Prize-winning book on al-Qaida, "The Looming Tower," and asked why his daughter had been talking to a Brit who was in contact with al-Qaida. She hadn't. He had been talking to a British lawyer who represented family members of Ayman al-Zawahiri, Osama's top lieutenant.

That's the downside of intelligence. Sometimes it's downright stupid. But tying the hands of intelligence isn't smart either. Bush has been right to fight suits against telecom companies that cooperated with federal officials.

ACLU attorney Harvey Grossman argued that phone companies broke a "social compact" with their customers when they handed information to the feds. And, he noted, they knew better. Grossman contended that lawsuits against Big Phone would have provided "accountability."

That's a word Democrats who voted against the bill used, too. And it's bunk. They don't want accountability. Bush was held accountable by voters, who in 2004 decided Bush would be better on national security, so they re-elected him.

Now Obama wants to be accountable, too -- in the Bush way, that is.