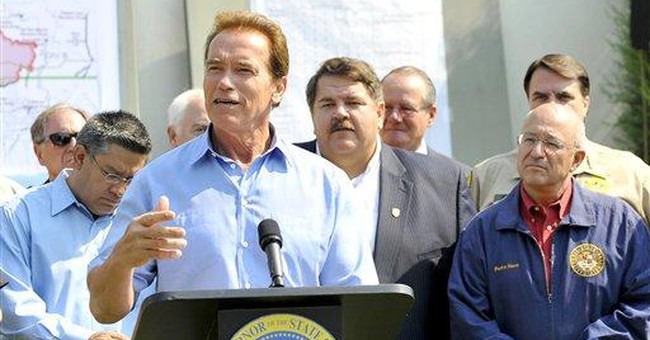 In 1994, Californians saw a state criminal justice system that too often let the worst criminals out of prison to wreak destruction and hurt the innocent, only to be sent back to prison for worse crimes. Fresno parent Mike Reynolds had been pushing Sacramento to pass a "three-strikes" measure after the murder of his 18-year-old daughter, Kimber, during a robbery in 1992. Then the rape and murder of Petaluma 12-year-old Polly Klaas -- kidnapped from her home by another violent career criminal -- confirmed the voters' worst fears.

The public was ready. The Legislature was afraid. And both Sacramento and California voters passed tough three-strikes measures. This being California, there was a pro-criminal lobby that warned against the law, which mandated a 25-year-to-life term for the third offense for criminals who had already committed two serious or violent felonies. It also increased penalties for a second strike.

Critics duly seized on state Department of Corrections forecasts, which ominously predicted that within five years, the prison population would more than double, from 124,813 to 245,554. The state would have to build 20 new prisons just to keep up. Within three years, opponents charged, prison spending would outstrip state spending on higher education.

Almost 15 years later, it turns out many of the so-called experts were wrong -- and the voters were right. In approving the tough-on-crime measure, California residents didn't have to pay for an inmate population explosion or a bunch of new prisons. What voters got instead was a law that, for the most part, has worked the way it was supposed to.

Fact: California's inmate count was 171,444 last year -- far below the grim projections. In part because other prisons already were in the works by the time voters approved three strikes, Sacramento authorized and completed not 20 new prisons in five years, but only one new prison in the past 14 years. And that happened while the state population grew from 33 million to 38 million.

Yet critics won't even admit they were wrong. What's worse, they want the public to believe that their horror stories actually came to pass. Every few years, lacking solid statistics, they throw out anecdotes -- like the repeat offender who was sentenced under three strikes after snatching a pizza from a group of children -- to argue that a draconian law has turned California into The Prison State, where petty criminals routinely are put away for life.

Why? Because they don't believe in harsh sentences for career criminals. They want repeat offenders to do long time on the installment plan.

State Sen. George Runner, R-Lancaster, decided to fight back -- with facts. His office put together a seven-page paper, "Who Is In Our State Prisons?," that debunks many of the oft-repeated three-strikes misinformation that paints California as a state that over-incarcerates. The paper points to a study released in February by the Pew Center's Public Safety Performance Project, which placed California in the middle quintile of American states in terms of inmates per capita. For the record, the Pew Center has been critical of three-strikes laws.

Think that California prisons are teeming with petty offenders? Think again. The Runner paper cites a federal survey that found that 47 percent of California inmates were repeat violent offenders, and 33 percent were repeat nonviolent offenders. Most of the rest were first-time felons who had committed crimes against people. Think murder, manslaughter, robbery, assault, rape, other sex offenses or kidnapping. California's crime rate fell dramatically after three strikes passed.

In 1993, the year before voters approved the measure, the FBI ranked California fourth among the states for total crimes per 100,000 people; in 1999, the murder rate had been cut in half, and California's crime rate had fallen to 29th place.

As far as Runner is concerned, long penalties have made California safer. The three-strikes law, he said, "keeps people in prison longer. It also makes people's behavior change."

Runner aide Charlie Fennessey points to burglary convictions as proof that criminals have changed their behavior to keep up with the changed laws. After 1994, he found, some crimes -- second-degree burglary and car theft, which are not three-strikes offenses -- increased to earlier levels, but first-degree burglary, a three-strikes crime, remained flat.

"There's no rational explanation as to why the trends in burglaries would be bifurcated," Fennessey said, "unless it had something to do with the penalties."

Adam Gelb of the Pew Center provided an alternative explanation. Although he has not studied California's three-strikes law, he noted, "There is a very common occurrence in courtrooms across the country. It's called 'losing the gun.'" The theory is that criminals are behaving as before, but officers of the court are charging criminals for lesser offenses to avoid third-strike overkill.

"There's no evidence that anyone on the street knows the going rates for what their sentence is going to be or how those punishment rates have increased or decreased over time." Gelb said.

"To say that three strikes has worked, the question is: Compared to what? Since there is so little evidence in any context that longer punishment acts as a general or a special deterrent, it's hard to say that California taxpayers have gotten their money's worth and could not have prevented more crime with a variety of strategies."

Michael Rushford of the Criminal Justice Legal Foundation in Sacramento conceded that some prosecutors may be undercharging to avoid the longer sentences for repeat offenders. But many prosecutors are not. And the Runner report shows that the three-strikes law has locked up career criminals -- which means that voters got from three strikes what they wanted. Seth Unger of the California Department of Corrections and Rehabilitation told me that more than 1,000 third-strikers entered California prisons in 1995-96, but only 294 third-strikers entered the system 10 years later. Something has changed. Said Unger, "What three strikes was designed to do was cut down on the churning of the prison population. We know that people (who are third-strikers) are not going to be coming back anytime soon through the front gates, because they're not getting released." When "three strikes" was put on the ballot in 1994, I voted no because I believed that the third strike should apply only to a serious or violent offense. I, too, believed that low-level offenders, not career criminals, would be locked behind bars for decades for petty crimes. So why can't other critics just admit they made a mistake? "The fundamental reason that critics of tough criminal penalties cannot come to grips with the facts is their unshakable belief that longer sentences inevitably increase prison population," the Runner report said. As if on cue, a February Pew paper asserted that laws like three strikes drive up the prison population. "Opponents of tough criminal laws cannot accept that penalties deter crime," the Runner report said. It's that simple. It appears that petty criminals have either left the state or changed their ways. If they committed crimes, some at least committed different crimes. And when some small-time thug did get nicked for a small crime, it turned out the guy had a host of priors and couldn't stay out of prison to save his life. Rather than celebrate the fact that California prisons are protecting the public by keeping violent, serious and repeat offenders behind bars, some California policy leaders actually want to neuter the three-strikes measure or even get rid of the law. Perhaps the three-strikes supporters should follow the example of their opponents: Argue that if we get rid of three strikes, not only will crime surely go up, but worse, we'll also have to build 20 new prisons. We'll start to spend more on prisons than we spend on higher education. If we get rid of three strikes, the prison population will explode. And this time, the dire predictions might turn out to be true. E-mail Debra J. Saunders at dsaunders@sfchronicle.com. To find out more about Debra J. Saunders, and read features by other Creators Syndicate writers and cartoonists, visit the Creators Syndicate Web page at www.creators.com. COPYRIGHT 2008 CREATORS SYNDICATE, INC.