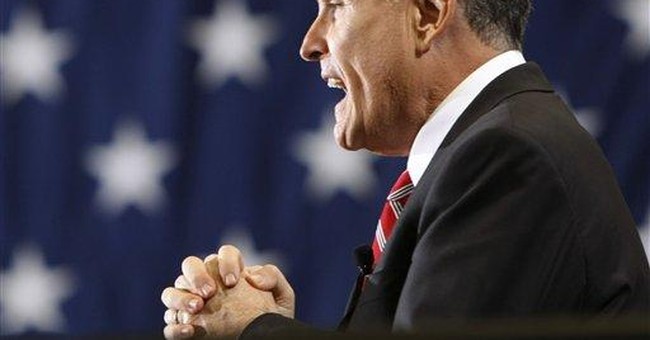 While the rest of punditry dumps on Republican presidential candidate Rudy Giuliani for his Florida strategy -- which, to put it mildly, does not seem to be working -- I have to wonder if Giuliani's biggest mistake was not touting himself as the only supporter of abortion rights in the Republican primary. I think he'd be faring better today if he had run as a security hawk and a fiscal hawk, but a social moderate.

After all, GOP presidential hopefuls John McCain and Mike Huckabee oppose abortion rights. Ditto Republican candidate Mitt Romney -- even if he promised in 2002 that, as Massachusetts governor, he would "protect a woman's right to choose." Giuliani is the only Republican who wants to leave government out of a woman's reproductive decisions.

One year ago, the story line on Giuliani was that he was the GOP front-runner -- despite the fact that he disagreed with the GOP base on abortion rights and civil unions. Now, the story line ignores Giuliani's positions completely and focuses on the fact that the former New York mayor has not even been among the top-three finishers in many early state elections.

It's painful to watch. Giuliani finished behind the screwball Ron Paul -- he's against the government requiring immunizations and wants to get rid of the Food and Drug Administration -- in Iowa, Michigan, Nevada and South Carolina.

RealClearPolitics.com HorseRace blogger Jay Cost points out that the 2008 primary "schedule was not (Giuliani's) friend." In Iowa, New Hampshire and Michigan, Huckabee, McCain and Romney found a state that offered them "a local niche kind of appeal." When Giuliani pulled major campaigning from those states -- and announced he was saving his fire for Florida -- hizzoner's support in those key states melted.

It may seem counterintuitive to take a stand that most party members do not embrace. According to a recent AP poll, two-thirds of Democrats -- but only one-third of Republicans -- believe abortion should be legal.

Nonetheless, a year ago, when GOP voters knew Giuliani's pro-choice position, they liked him the most because they saw him as a strong leader. After a year of soft-pedaling his abortion position, he doesn't look so strong.

A year ago, some abortion foes respected the fact that Giuliani didn't flip-flop on abortion to win the nomination. They also cared about electability in November 2008 -- and realized that they'd be better off with a president who, if he would not try to repeal Roe vs. Wade, at least would support parental notification laws and would not appoint liberal judges.

Meanwhile, Giuliani's failure to play up his support for abortion rights kept pro-choice Republicans from rallying behind him. Cost noted that exit polls showed that 52 percent of New Hampshire voters believe that abortions should be legal -- yet Giuliani was the pick of only 11 percent of those voters. If Giuliani had tried to reach out to the Granite State's pro-choice voters, he could have been a contender.

While there are fewer pro-choice Republicans in Michigan (about 35 percent) and South Carolina (about 25 percent), Cost observed, "In a multi-candidate field, this might have been a missed opportunity for Rudy."

Why didn't Giuliani play up his support for abortion rights? I asked former Gov. Pete Wilson, who won California statewide office as a pro-choice Republican and has endorsed Giuliani.

Yeah, but: Other candidates are strong on the economy and terrorism, too. Giuliani's appeal was that many Americans saw him as the man you wanted with you if your back is to the wall. Then, as the election wore on, voters saw a candidate who tried to distance himself from his moderate stands on social issues. The firebrand was doused.