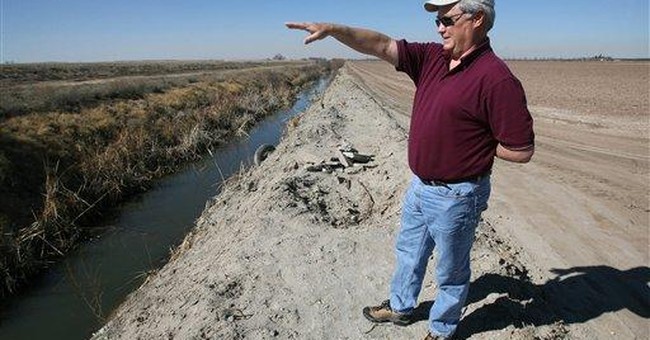 "It does seem to me like the government overreacted here," Judge E. Grady Jolly of the federal 5th Circuit Court of Appeals remarked Monday, according to The Associated Press. Grady is on a three-judge panel considering an appeal filed by two Border Patrol agents serving 11- and 12-year sentences for shooting at and wounding a drug smuggler fleeing across the border. The trial judge's decision to bar questions exploring the smuggler's other dealings, Judge Patrick Higginbotham opined, "strikes me as relevant."

Finally, a ray of hope for Ignacio Ramos and Jose Compean. On Feb. 17, 2005, the two Border Patrol Agents shot at Osvaldo Aldrete-Davila as he ran toward the Texas-Mexico border after ditching a van containing 743 pounds of marijuana.

In 2006, a jury convicted the agents on charges of assault with a dangerous weapon, discharge of a firearm during a violent crime, obstructing justice, lying about the incident and willfully violating Aldrete's Fourth Amendment right to be free from illegal seizure. The jury apparently did not buy the agents' claim to have seen a shiny object -- which they feared was a gun -- in Aldrete's hand.

The big question is whether jurors would have ruled against Ramos and Compean if they had heard cross-examination likely to have punctured Aldrete's self-portrayal as a down-on-his-luck professional truck driver with a sick mom in need of a quick $1,000 to $1,500.

Ramos and Compean supporters have argued that Aldrete was no innocent. Their view was bolstered last month, when the feds arrested Aldrete on charges that he was running hundreds of pounds of marijuana across the border while he enjoyed a "humanitarian visa" -- issued at the feds' urging to facilitate U.S. doctors treating the gunshot wound in his buttocks.

Now, to believe the smuggler's story, you have to believe that Mexican drug kingpins just happened to hand more product to a man who had left 743 pounds of marijuana in Texas in 2005 -- as if cartels are big on second chances.

Even at trial, Aldrete testified that Border Patrol agent Rene Sanchez told him that he could file a lawsuit and helped him find the lawyer who represented Aldrete, who was suing the government for $5 million. He had motive to lie.

The Associated Press also reported that Assistant U.S. Attorney Mark Stelmach admitted to the 5th Circuit that Aldrete had told "some lies" to investigators.

Americans across the country have voiced outrage at the very notion that the federal government would grant limited immunity and a border pass to a veracity-challenged drug smuggler so that he could testify against two Border Patrol agents whose careers have been dedicated to keeping the border safe.

At the very worst, Ramos and Compean made a bad split-second decision and knowingly fired at an unarmed fleeing suspect -- and then covered it up. But to believe the worst, you have to believe the tort-happy smuggler's claim that he was not armed or carrying a cell phone.

T.J. Bonner, the chief of the Border Patrol agents' union, noted last week that if the three-judge panel affirms the appeal, Department of Justice prosecutors will have to decide to retry the case or let it go. "If they're smart, they will let it go, because if they don't, everything comes in."

President Bush now has the opportunity to commute the sentences of Ramos and Compean before the panel acts -- after two judges have signaled their dissatisfaction with the prosecution. A commutation would help Bush within and outside his conservative base. Not only have many GOP lawmakers asked for a pardon, but Sen. Dianne Feinstein, D-Calif., also has joined them.

Bonner added that whether Bush "is going to swallow his stubborn pride remains to be seen."

Ramos and Compean have spent nearly a year in isolation in prison. If they had been corrupt agents who cut deals with human smugglers, they no doubt would have cut a deal for shorter sentences. Instead, they must spend 11 and 12 years away from their wives and children -- and among those whom they once apprehended. If they killed someone -- or if they were professional smugglers who could turn in other drug players -- they'd probably face shorter time.

President Bush should commute their sentences and get these men home for the holidays. Or he can punt and let federal judges do what should be done.

Why the Media Is About to Run Away From the Texas Synagogue Hostage Story
Townhall
Who. They. REALLY. Are --> Arlington Public Schools Comms. Dir. ACCIDENTALLY sends email crapping on The Daily Caller TO writer at The Daily Caller
Twitchy
Fed up Manager Shows How It’s Done After Gillibrand Flouts NY’s Mask Rules in His Restaurant
Redstate
The Morning Briefing: Democrats Remain Disturbingly Fond of Islamic Terrorists
PJ Media