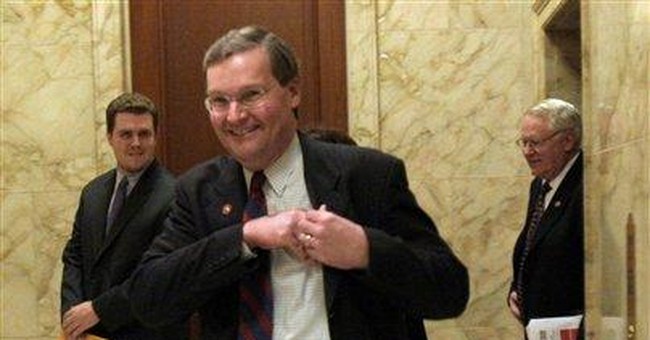 Citizens for Responsibility and Ethics in Washington placed Doolittle on its "22 Most Corrupt Members of Congress" roster. The Placer County, Calif., Republican also is in the small club of elected officials under federal investigation for corruption. His name has come up in connection with convicted uber-lobbyist Jack Abramoff, and with convicted (as of Monday, on bribery charges) defense contractor Brent Wilkes. In April, the FBI searched Doolittle's Virginia home.

Doolittle was forced to resign from the House Appropriations Committee. Nonetheless, Doolittle is running for re-election.

In September, Doolittle told the Sacramento Bee, "I understand the phrase that when the going gets tough, the tough get going. I am not going to have any of these weasels who, for self-promotional efforts, are cooking up these half-baked polls and trying to influence me. What I find amazing is that they want me to give up so they can get what they want."

Getting what he wants -- that Doolittle knows. Doolittle, you may recall, made news for letting a campaign fund pick up the tab for babysitting his daughter -- $4,581 since 2001, The Washington Post reported in 2006. He brought new meaning to the phrase "family values."

Doolittle's annual salary has been more than $150,000 since 2002. Not enough. So he and his wife gave themselves a raise. Wife Julie set up a political fund-raising firm that allowed her to earn 15 percent off of every dime raised for Doolittle's Superior California Fund. She also received a cut for donations she raised for his re-election campaign -- to the tune of $140,000 over three years.

Legal? Apparently, Doolittle was told it was legal. And I want to make it clear that the feds have not charged Doolittle with any crime. He deserves the presumption of innocence. But that doesn't make Doolittle Inc. right. Savvy donors knew that if they wrote a check to a Doolittle campaign through Julie Doolittle, the congressman's household income would be richer by 15 percent of the check. This arrangement was a recipe for conflict of interest.

Eric Egland, a U.S. Air Force reservist and counter-terrorism consultant, is one of two Republicans running against Doolittle in the primary. "I can't believe I have to say it," Egland told me, but he promises that if he wins office, his wife, Ania, won't set up a fund-raising business.

"If you want to make a lot of money, great," Egland added. "Make it in the private sector."

"In my heart, I don't think he's committed any crime," Jon Fleischman, publisher of the influential conservative Website www.flashreport.org told me. Still, Fleischman added, "No one has ownership rights to a seat in Congress.

There's a responsibility to your party to acknowledge that objective data show you cannot win'' -- under less of an ethical cloud, Doolittle barely squeaked to victory in 2006 with 49 percent of the vote -- "and to step aside." People who know Doolittle well don't want to hurt him by saying publicly that he should bow out, although some party biggies have made it clear they want Doolittle to just go away.

As one who knows Doolittle less well, all I see is the rot that has corroded the Republican Party. This is the party that lost votes in 2006 because the leadership was too free spending other people's money. The conservative Club for Growth recently issued a RePork Card to grade members' voting record on 50 bills designed to fight wasteful pork-barrel spending, known as earmarks. A "perfect 100 percent" went to 16 members, all Republicans, who voted against all 50 pork bills. Doolittle scored 2 percent.

He voted against only one earmark. So when John Doolittle calls critics "weasels," I guess he figures that voters have a duty to pay for his pork -- and like it.