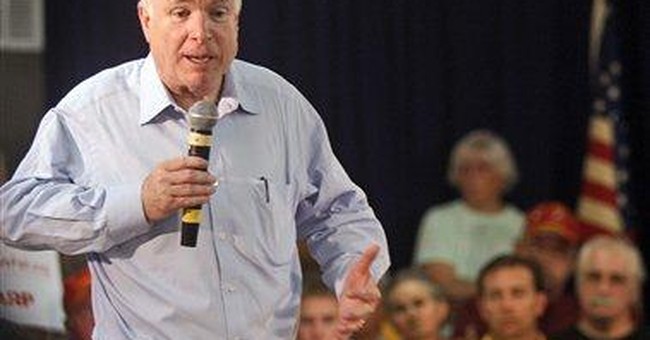 This month, Sen. John McCain's Straight Talk Express exited the freewheeling presidential campaign highway. Top advisers Terry Nelson and John Weaver left the campaign last week. Many lower-level staffers announced they, too, were hitting the road this week. Most embarrassing was the news that U.S. Rep. Ron Paul, a Texas Republican who garnered zero percent of the GOP vote in a recent USA Today poll, had more cash on hand -- some $2 million -- than the McCain campaign, after subtracting debt.

Monday, in the midst of campaign repairs, McCain made a pit stop at the Churchill Club, a Silicon Valley business leaders' organization, in Santa Clara, Calif. "I'm not a good fund-raiser," McCain deadpanned. As for his campaign woes, McCain said, "The responsibility is mine and no one else's."

McCain was not speaking to a full room. The crowd was not wildly enthusiastic. Nonetheless, the midday event showcased the side of McCain many voters like.

To start, the maverick McCain is willing to take unpopular positions. Then again, the downside to being a maverick is that you are bound to take at least one position to which almost every voter can object. It is notable that the audience member, become.com's CEO Michael Yang, who praised McCain for "your conviction and sticking for what you believe in," later told me he could think of no issue with which he disagreed with McCain. In fact, Yang agreed with McCain's support for the Iraq war and the failed Senate immigration bill.

McCain's position on the Iraq war probably cost him some independent voters, but it also won support from more conservative voters. One staffer guessed that the issue was a wash for the primary. Immigration, however, cost McCain dearly among GOP voters. Pollster.com shows McCain support slipping this year from 25 percent to 15 percent among Republicans.

McCain had better hope that California voters want a real maverick, considering how few of them support the war. While other Republicans are calling for another new Iraq strategy, McCain did not back down. He pointed out that holding back U.S. troops to force Iraqi troops to fight more is the old strategy Bush critics trashed a year ago.

Eileen Elam, a publicist, asked McCain what situation or time would prompt him to support pulling U.S. troops out of Iraq. Again, the former Vietnam POW would not back down.

What did Elam think? She said later, "I don't think it satisfies the American people, his answer." Will she vote for McCain? She hasn't decided.

McCain showed himself to be willing to anger some conservatives in talking up the need to act on global warming, as well as to anger some environmentalists by arguing that nuclear power should be part of the mix.

Asked about the rancor in politics, McCain quipped that Congress' approval rating was so low -- FYI, it is 26 percent, lower than Bush's 29 percent -- that the only people who approve of Congress are "paid staffers and blood relatives."

McCain also hit a sweet spot when he asserted that Republicans lost congressional seats in 2006 because of overspending and corruption. "Congress has got to have the will -- the will to say no," McCain said. The many years he spent as a lonely enemy of pork-barrel spending give McCain solid credentials there. Maybe he can turn poor fund-raising into an asset.

McCain also has the rare ability to surprise -- in a universe of rehearsed sound bites. Moderator Tony Perkins, founder of Red Herring, noted that he was reading a book about Churchill and Roosevelt and the effectiveness of their "personal relationships." In that Perkins has deep pockets, the question provided McCain the perfect opportunity to coo about the need for more personal diplomacy.

Instead, McCain said, "This may surprise you, but I think personal diplomacy is the most overrated aspect (in foreign affairs), because leaders have to act in their nation's national security interests." Then, alluding to Bush's silly comment that he looked Russian President Vladimir Putin in the eye and saw Putin's soul, McCain quipped, "When I looked into Putin's eyes, I saw three letters: K, G and B."

I disagree strongly with McCain on immigration, but recognize that McCain was acting from conviction.

"I would rather lose a political campaign than a war," McCain said famously. That makes McCain the right Republican to run against Sen. Hillary Clinton.