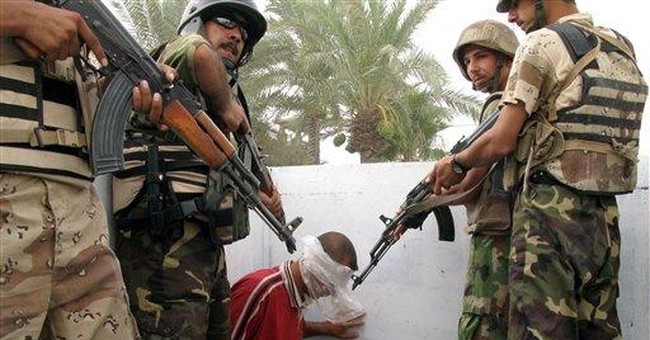 During a teleconference from Iraq with reporters last week, Maj. Gen. Rick Lynch, commander of coalition forces operating in the region south of Baghdad, explained, "Lynch's rules of war fighting." Rule 1 is, "Everything is timing, and the second rule is, everything takes longer than you think it's going to take."

I've had people ask me what it would take for me to support withdrawing U.S. troops from Iraq. The answer: If military leaders such as Lynch or top Iraq commander Gen. David Petraeus say this war is not winnable, then it's time to get out.

But when U.S. senators -- be they Republicans Richard Lugar and Pete Domenici, or Democrats Hillary Clinton and Harry Reid -- call for a timetable to withdraw U.S. troops, that's not a sign to get out. It's a sign that D.C. pols want to be on the popular side of an unpopular war. It's a sign that Washington lacks what Sen. John McCain, R-Ariz., described as "the courage necessary to put our country's interests before every personal or political consideration."

U.S. troops serving in Iraq deserve better. It simply is too soon to be talking about the surge failing. U.S. forces in Iraq did not meet full surge strength until June 15. It makes no sense to send an additional 20,000 troops to Iraq, then not give them the time to do their job. It also makes no sense to call for a change in plans now that the Bush administration is doing what critics demanded -- increasing troops and changing strategy.

More important, there is evidence that the surge and the Petraeus approach to fighting the counterinsurgency are working. Lynch told reporters: "What I believe is (that) al-Qaida has worn out its welcome. They've overplayed their hand, and their tactics have indeed backfired."

More Iraqis are coming forward to share intelligence in ways that have not occurred before. U.S. troops are seizing weapons caches, which should reduce the number of bombs used against American forces. Lynch also noted that Iraqi troops are beginning to identify as Iraqis, not simply as Sunnis and Shiites. Sunni tribes in Anbar Province are reported to have flipped from their alliance with al-Qaida in Iraq. Returning from Iraq, McCain noted that Ramadi, "which just months ago stood as Iraq's most dangerous city, is now one of the safest."

Not all of Lynch's words were reassuring. He criticized Iraqi police as "either not competent or corrupt." Lynch noted that he has been fighting to "clear, to hold, to retain" territory that "became an enemy sanctuary because no one was there" to keep insurgents out.

During Wednesday's Senate debate, many senators argued that a troop withdrawal is needed because American troops have no business fighting in another country's civil war. Nice sound bite, but Americans should be clear that this is not a civil war with two sides fighting on a battlefield. It is a war in which terrorists from various factions are waging war against civilized society, using violence and intimidation to sabotage efforts to stabilize and secure Iraqi daily life.

If the ugly tactics of purposefully killing innocent civilians prevail, then those tactics will spread beyond Iraq's borders. As McCain noted in prepared remarks on July 10, if al-Qaida insurgents "defeat the United States in Iraq, they will believe that anything is possible, that history is on their side, that they really can bring their terrible rule to lands the world over."

And: "The terrorists are in the war to win it. The question is: Are we?"

The answer, judging by this week's debate in the Senate, is: not exactly. Thankfully, there are still enough (mostly Republican) senators to block bills to start pulling out U.S. troops. With more than 3,600 U.S. troops killed in Iraq, many Americans just want this war to go away. That's a natural desire, but it ignores the price that American troops will have to pay if U.S. troops again are called to arms.

For all the mistakes that have been made, the Iraq war effort today benefits from the new Petraeus counterinsurgency strategy, committed U.S. troops and Iraqis who sense a final chance to grab the brass ring of normalcy. While Iraqi politicians are failing, many Iraqi people are risking their lives to bring about change. This moment should not be sacrificed because American voters and politicians are tired of the war -- not when those at the center of this storm believe they can make it work.