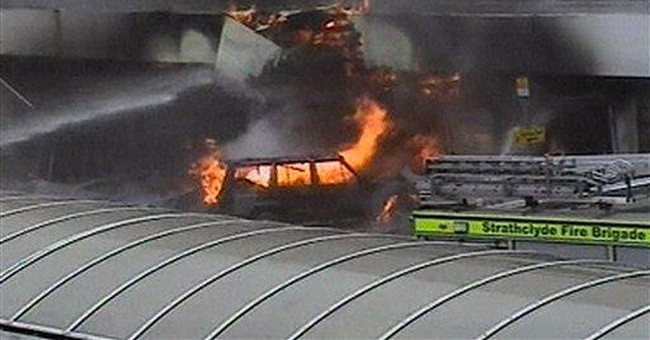 A gasoline-filled device in a car bomb fails to go off. Authorities investigating another bombing incident find that after a first bomb exploded, a second bomb was timed to go off when first responders arrived. A recent event in the United Kingdom? Yes, but also in California.

Last week, the Los Angeles Times reported that a bomb was discovered outside the Westside home of Dr. Arthur Rosenbaum, the chief of pediatric ophthalmology at UCLA's Jules Stein Eye Institute. The car bomb failed to explode, despite apparent attempts to detonate it.

The terrorists behind the American firebombs were not Islamic fanatics, but animal-rights jihadists bent on harming and intimidating scientists who conduct medical research on animals. They also have targeted employees of businesses that might work with researchers, as well as harassed the spouses and young children of researchers.

Americans for Medical Progress President Jacquie Calnan warned that the latest incident "marks a disturbing escalation in the tactics of intimidation and harassment."

Last year, animal-rights activists went after another UCLA researcher by placing a firebomb at her doorstep -- except that they put the bomb at the wrong home. Fortunately, that bomb, too, failed to ignite.

While the bombs did not go off, FBI Special Agent Kenneth E. Smith observed, "the devices could have detonated, resulting in significant damage."

So far, animal rights activists have not killed anyone in the United States, but that does not mean Americans should not fear these extremists. In October 2005, Dr. Jerry Vlasak, a Southern California trauma surgeon who is a leader of the North American Animal Liberation Front, testified before the U.S. Senate and defended killing researchers in order to stop research using animals.

And the threats of violence and intimidation work. Last year, UCLA researcher Dario Ringach sent an e-mail to Vlasak in which he proclaimed, "You win" -- he would stop research with animals. Vlasak sent out a triumphant press release.

Vlasak told the Daily Bruin that activists had tried to stop Rosenbaum's research by appealing to UCLA administrators but had failed. "All reasonable attempts have failed, so we're going to take it to the next level," Vlasak told the student paper.

When abortion foes have harassed -- even killed -- abortion clinic workers, outrage rightly has followed. Oddly, when animal rights activists threaten and harass people who are trying to cure diseases, the silence is deafening.

When animal-rights activists' vandalism cowed the New York Stock Exchange so that it pulled the planned listing of Life Sciences Research -- a medical-research firm -- in 2005, the New York Times didn't bother to report it.

Now Vlasak says that animal-rights activists will move to the next level. Expect more firebombs, more harassment campaigns -- and less research. And because there is no partisan angle to this story -- no Democratic or Republican bogeyman -- there is no outrage.

Note: Saunders' husband, Wesley J. Smith, is a senior fellow at the Discovery Institute and is writing a book critical of the animal rights/liberation movement.