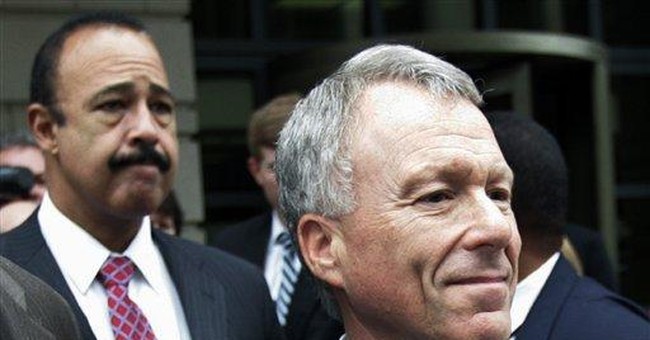 Like Bush, I buy the jury's verdict that Libby committed perjury and obstructed justice in a Department of Justice probe to discover who leaked the identity of CIA operative Valerie Plame Wilson. Perjury is no small crime and Libby could have spared himself a long legal ordeal if only he had not lied to investigators. Libby made his own bed.

Bush split the judge's sentence down the middle. He did not pardon Libby, but instead upheld the $250,000 fine and two years of probation. Bush reasoned that the fine, probation and prison time, however, were "excessive."

As Bush noted in a written statement, in making the sentencing decision, the judge "rejected the advice of the probation office, which recommended a lesser sentence and the consideration of factors that could have led to a sentence of home confinement or probation."

My complaint is that Bush did not commute other sentences for individuals serving "excessive" time under the federal mandatory minimum sentencing laws.

About an hour after the news, Amy Ralston called me. Ralston had been sentenced to 24 years for her role in her former husband's reputed Ecstasy ring, until President Clinton commuted her sentence in July 2000.

"I only look at it one way," Ralston said. "I want to know if he granted additional pardons for other people who are serving 20 to life for minor drug crimes. I know so many who have had their petitions denied by the Bush administration, who are deserving."

Ralston was crying as she discussed friends left behind in prison, serving sentences far longer than their crimes warranted. (Her Website is www.candoclemency.com.)

As long as Bush is looking at "excessive" sentences that cry out for a presidential fix, he should consider the sad case of Clarence Aaron. Aaron was 22 years old when he made the huge mistake of hooking up two drug dealers for two cocaine deals. He was paid $1,500 -- but because he did not testify against the big fish in the deal and he pleaded not guilty, he was sentenced to life without parole -- that's right, life without parole -- for a first-time nonviolent drug offense.

U.S. Border Patrol agents Ignacio Ramos and Jose Compean are serving "excessive" prison sentences right now. The agents were convicted for shooting at a fleeing suspect who was smuggling 743 pounds of marijuana over the border in 2005, as well as for covering up the shooting and denying the smuggler of his rights. Today, the smuggler is suing the federal government for $5 million, while Ramos and Compean are serving 11-year and 12-year prison sentences, respectively.

These men dedicated their adult lives to public service. They deserve a commutation, so that they can return to their wives and the children who need them.

"There are hundreds if not thousands of worthy clemency petitions awaiting the president's decision -- these prisoners don't have the same White House connections as Scooter Libby, but they deserve the same serious consideration he received," wrote Families Against Mandatory Minimums President Julie Stewart. "The president needs to grant these applicants to prove that clemency is available not just to the well-connected but to every deserving prisoner."

"Independence Day is coming," Ralston noted. "And I think that would be the perfect time for President Bush to grant some more clemencies. I'll be watching the fireworks this Fourth and hope some of the women I left behind will have that same privilege."