Hillary, Bill, Tony, You and I 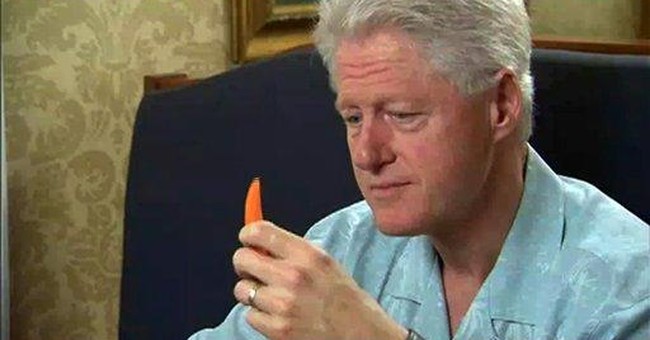 NBC's Matt Lauer wondered if Sen. Hillary Clinton's presidential campaign gurus "had too much time on their hands." New York Times columnist Maureen Dowd watched the Clinton video, a Soprano's finale spoof announcing her campaign's theme song, and wrote, "Carmela got gold jewelry, Hillary wants a White House." Joe Garden, features editor for the Onion, told National Public Radio, "It just struck me as amazing that somebody who spent valuable Senate time and tax dollars griping about videogame violence would sort of try to piggyback on the popularity about a television show about a murderous sociopath."

Lighten up, people. I'm no fan of Hillary or Bill Clinton, and I thought the video was (pardon the pun) hilarious.

In the opening scenes, in a Mount Kisco diner, La Hil orders carrots for the table. "No onion rings?" a disappointed ex-president asks. "I'm lookin' out for ya," the senator explains. Outside, daughter Chelsea, not Meadow Soprano, botches parallel parking. Inside, the Clintons browse jukebox selections in a lead-up to the campaign theme-song announcement -- with a go-to-black ending. As Sopranos' faithful are going through withdrawal, fans had to be thankful for even a satirical taste of the HBO series.

The winner of the campaign song contest: Celine Dion's "You and I." No surprise there, "You and I" are the two top words in any politico's lexicon -- if in a different order.

It's brilliant. As Democratic political consultant Garry South noted, "One of the things we know is that campaigns, more now than ever, really have to attach themselves to popular culture in some way, or they generally fall flat."

Flat? Polls show that as many voters dislike Clinton as like her. A recent NBC-Wall Street Journal poll found that 42 percent of voters were positive toward Clinton, and 42 percent were negative -- but 26 percent were very negative, compared to 18 percent who were very positive.

Some Americans see Hillary Clinton as brittle, humorless and overly ambitious. "I don't like her. I think she's condescending and arrogant, even worse than Al Gore, who has no personality," a 52-year-old Democrat told the Los Angeles Times.

"Who wants four or eight more years of the Clintons' marital disputes, paid for by the United States?" a disabled teacher and registered Democrat added.

Team Hillary's three videos on the campaign-song contest combat those negatives, as they showcase a more relaxed, even humorous, senator and spouse.

(For those who think it is sexist to refer to the senator as "Hillary," not as Clinton, I can only cite the need to distinguish the hopeful Her from the former president Him. In 2000, wags referred to Bush as Dubya to distinguish him from his father, George H.W. Bush.)

No video can wipe away the ambition question. Already, Mrs. C. parlayed her long-suffering approach to her husband's hobby into a New York Senate seat. If she wins the White House, Clinton could be seen as America's most successful victim. Or as the fictional Carmela Soprano, an avowed Bush voter, said of Hillary during a ladies' lunch, "She's a role model for all of us."

I can see the GOP attack ads now: Hillary Clinton, a role model for the mob.

Not that it would stick.

"I don't see this campaign making a lot of mistakes," South noted. I have to agree. Candidate Clinton has come across as smart, likeable and presidential.

It's her voting record that is wanting. Some war opponents wonder if Clinton's vote in favor of the 2002 Iraq war resolution was cast in order to make an ambitious White House hopeful seem muscular (and masculine) on foreign policy. I believed that Clinton voted for the war for the right reasons -- because, like her husband, she believed Saddam Hussein had WMD. Now, perhaps ambition has her running from a vote that U.S. troops cannot walk away from.

Watch the video, and for a moment, you can fuggedaboutit. As Hillary Clinton said to her hubby in the diner, "Well, as you always say, 'Focus on the good times.'"