The 'Law and Order' Candidate 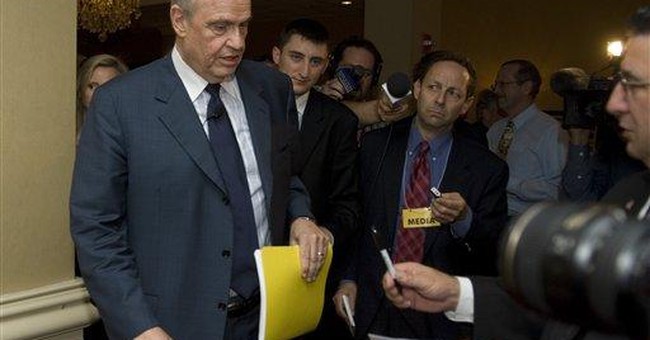 Acting -- and not necessarily skilled acting -- seems to have become the training ground for Republican politicians with high ambition.

The standard cursus honorum for a would-be president typically began with a local office, then in a state legislature, then maybe Congress. The GOP, however, increasingly draws candidates from Hollywood (not the most hospitable environment for conservatives).

While Beltway insiders once showed disdain for America's first actor-president Ronald Reagan and Our Betters in Europe may sniff at actor-governor Arnold Schwarzenegger, many Republicans like the idea of "Law and Order" star and former Tennessee Sen. Fred Thompson running for the White House. "There are a lot of social conservatives who are waiting on Fred," one fan told me.

"We're all a little giddy about it." Face it: Being an actor helps. Thompson looks like a president -- he even has been cast in the role. He has the pipes and a magnetic persona. He uses folksy words to combat the disingenuous rhetoric of Washington.

An example: "We should scrap this 'comprehensive' immigration bill and the whole debate until the government can show the American people that we have secured the borders -- or at least made great headway." Works for me.

Thompson has demonstrated that he can be fair. When he chaired the Senate Government Affairs Committee hearings on 1996 presidential campaign-finance abuses, Thompson shined the harsh light of scrutiny on the fund-raising excesses of both parties.

When I interviewed Thompson about his committee's report in 1998, he lamented the lack of honesty and respect for the rule of law: "I've come to the conclusion that people come before congressional committees and have very, very little fear of lying. It's almost come down to the point where under-oath testimony is basically given the same consideration as cocktail party talk. There's no real feeling that 'now I'm under oath, I've got to tell the truth' anymore."

Thompson was one of 10 Republican senators to vote against convicting President Bill Clinton after the House impeachment for perjury, but he did vote to convict on the obstruction of justice charge.

Yet Thompson does not come across as fair in a recent speech defending Scooter Libby, the former aide to Vice President Dick Cheney convicted of perjury and obstruction of justice. Thompson called for a presidential pardon on the grounds that "when you reverse an erroneous court decision, you are not disregarding the rule of law, you are enforcing and protecting it."

That's a problem. I don't want Libby to go to prison. I think it's an outrage that Special Prosecutor Patrick Fitzgerald prosecuted Libby for covering up his actions during Fitzgerald's probe into the leak of a former CIA official's identity -- especially because Fitzgerald never saw fit to prosecute the original leak itself.

Still, you can't vote to convict Clinton for obstructing justice, then argue that pardoning Libby would preserve justice.

Thompson's supporters promise an "unconventional campaign" that uses free media creatively. They point to Thompson's YouTube video response to filmmaker Michael Moore's challenge to a debate -- which siphoned away media attention from the second GOP presidential primary debate of announced candidates. He was a no-show, but he won points in the spin game.

Others wonder if the unconventional campaign spin is an attempt to make a virtue out of Thompson's reputation as a man not willing to work Washington hours.

Former California Republican Party Chairman Duf Sundheim told me, "I view him as the Wesley Clark of the 2008 campaign." Sundheim said he thought Thompson could become a serious candidate, but that a much-hyped speech in Orange County, which fell short of expectations, "leads me to believe he's not ready yet."

Then again, there was a time when that was what they said about Ronald Reagan.