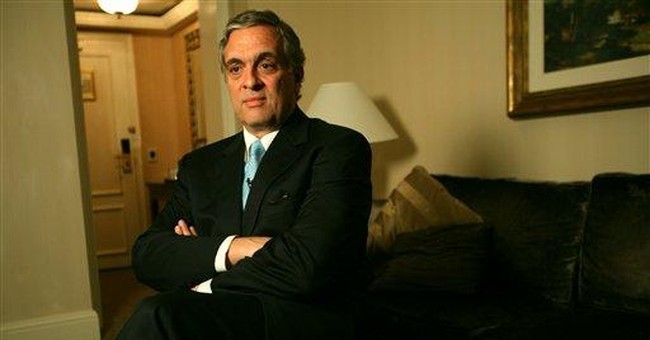 Sorry to take a week before writing on former CIA director George Tenet's book, "At the Center of the Storm, My Years at the CIA." My bad: I actually took the time to read the book.

So while I should be opining about what those inside the Beltway think is important -- Tenet feuding with Bushies -- I am more concerned with the book's compelling information on the likelihood of another industrial-strength terrorist attack within American borders.

As Tenet noted, al-Qaida biggie Ayman al-Zawahiri called off a planned attack against the New York City subway system slate for the fall 2003 because he was holding out "for something better." A key witness in Osama bin Laden's in absentia trial for his role in the 1998 Kenya and Tanzania embassies bombings testified that he had helped bin Laden try to obtain uranium in Sudan as far back as 1993. In August 2001, bin Laden hinted that he already had the necessary fissile material to make a nuclear bomb.

The late Abu Musab Zarqawi ran a chemical and poison lab in Northern Iraq from May 2002 to 2003. Intelligence operatives learned that al-Qaida in Saudi Arabia was negotiating for three Russian nukes. The Saudis found cyanide in an al-Qaida safe house. Cyanide was the weapon of choice for the planned New York City subway attack.

To Tenet, the biggest threat from al-Qaida is nuclear. "They understand that bombings by cars, trucks, trains and planes will get them some headlines, to be sure. But if they manage to set off a mushroom cloud, they will make history." And: They want to make history.

To Beltway insiders, however, a pending threat to American security means nothing when there is an opportunity to allege that Tenet's CIA skewed its estimates to please President Bush.

Or, as NBC's Tim Russert asked Tenet on "Meet the Press" Sunday, "What if you said: 'Mr. President, I can't make the case any better. It's not a slam dunk'?"

As Tenet told me over the phone Monday, "Some of the criticism implies that you (Tenet) knew the intelligence was wrong and you could have stopped it." That criticism is simply misinformed. As Tenet wrote, "I believed (Saddam Hussein) had WMD, and I said so." The CIA was convinced Hussein had biological and chemical weapons; the only doubt concerned whether he had nuclear weapons. Also, the CIA knew that Hussein had access to 550 tons of yellow cake -- enough to produce 100 nuclear weapons -- within Iraq's borders. (Note: That's independent of allegations that Iraq sought yellowcake in Niger.)

And, Iraqis believed Hussein had WMD. For months before the war began, embedded operatives met with Iraqi military officers. Tenet wrote, "Every military officer we debriefed told us that Saddam did indeed possess WMD."

War critics may want to believe Tenet's beef with Bush reflects the fact the Tenet did not believe Iraq WMDs were a "slam dunk." Wrong. Tenet objected to the Bushies' suggestion that the "slam dunk" answer provided "the seminal moment for steeling the president's determination to remove Saddam Hussein and to launch the Iraq war." As Tenet wrote, the "slam-dunk" meeting occurred in December 2002 -- three months after Bush told the United Nations that Hussein should remove or destroy his WMD, and two months after Congress voted to authorize the use of force against Iraq. Tenet will accept the blame for WMD intelligence that turned out to be wrong -- but not for nudging Bush into war.

Tenet does take to task some Bushies -- most notably Veep Dick Cheney and his former aide, convicted perjurer Scooter Libby -- for over-hyping the link between Hussein and Sept. 11. And Tenet makes the case.

Critics have said Tenet should take more responsibility for being wrong on WMD. Certainly Tenet did himself no favor when he suggested that Secretary of State Colin Powell might have given a more credible address to the United Nations on Feb. 5, 2003, if only Tenet and company hadn't spent "two days getting the garbage out of a White House draft" written by Libby.

The book begins with a claim that Pentagon adviser Richard Perle wanted to go after Iraq on Sept. 12, 2001 -- a claim Perle debunked by proving he was in France that day.

But the book will not win Tenet many points among war critics and Washington insiders. You see, Tenet would not rewrite the record and pretend that intelligence on WMD was willfully misleading. He won't take Bush's State of the Union sentence about Iraq trying to get yellowcake from Niger and twist it into proof positive that White House deliberately misled the public about Iraq's nuclear capability -- which somehow means that Bush lied about chemical and biological weapons, too. If he blamed Bush for everything, then Tenet would be a hero. Slam dunk.