Sanctuary and Safety in the Special City 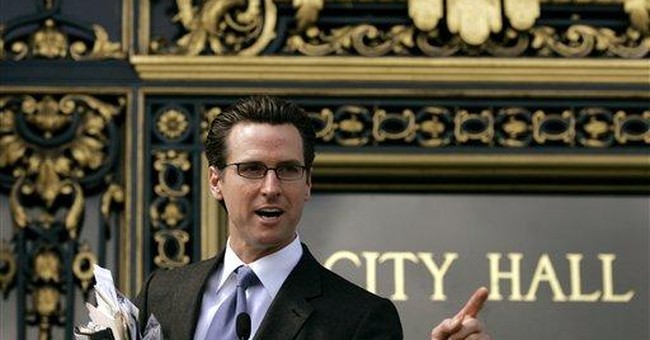 San Francisco Mayor Gavin Newsom is opposed to federal law enforcement efforts to apprehend illegal immigrants who are violating deportation orders. Ess Eff, the mayor told a gathering at St. Peter's Church Sunday, is a "sanctuary city" -- and has been since 1989. So Newsom assured the audience, "I will not allow any of my department heads or anyone associated with this city to cooperate in any way, shape or form with these raids." Illegal immigrants, rejoice.

The folks at Immigration and Customs Enforcement (ICE) are none too happy with the term "raids." Raid implies that agents sweep into homes and businesses trolling for any illegal immigrants upon whom they might happen to stumble, whereas the targets of Operation Return to Sender are "immigration fugitives" named in warrants because they have violated deportation orders or returned to the country after having been deported.

Often, immigrant fugitives have criminal records. ICE official Virginia Kice told me that of the 1,400 people arrested in Northern California over nine recent months, 785 were immigration fugitives and 339 had criminal convictions in America. "We prioritize those cases involving individuals who are not only immigration violators, but also have criminal convictions, often for serious offenses," said Kice.

In essence, then, Newsom is denouncing immigration officials for enforcing laws passed by democratically elected representatives in Washington. Once again, San Francisco's mayor sends the message that if you don't like a law, then don't work to change it. Just break it. (City taxpayers should take note.)

Why shouldn't ICE officials go after immigration fugitives? Spokesman Nathan Ballard answered, "What the mayor is saying is that these raids instill fear, these nighttime and early morning raids have left many immigrants feeling fearful and vulnerable." And, "These raids jeopardize the public health and safety in the city by instilling fear in those who might come forward to report information on a crime or those who are in need of medical treatment."

Note the apparent belief that law enforcement personnel should not arrest lawbreakers, lest the arrest upset the of fenders' families. That can't help morale at SFPD.

On the one hand, Newsom's comments are irrelevant because ICE doesn't ask local cops to help apprehend "immigration fugitives."

What is more, the Special City's sanctuary policy includes an exemption that allows city workers to assist ICE when "such assistance is specifically required by federal law." San Francisco Sheriff Mike Hennessey told me that, in accordance with federal law, his office notifies ICE about "hundreds" of jailed illegal immigrants every year.

On the other hand, Newsom's rhetoric matters because it sends a message that San Francisco supports those who flout not only federal immigration laws, but also deportation orders. If they have criminal records, so be it.

And as Kice noted, "Nobody is going to be removed from the United States without due process." As for the early morning arrests -- ICE officials want to catch deportation scofflaws before they go to work.

The sheriff told me, "I think the sanctuary ordinance has distinct positive value in San Francisco." To wit: It assures illegal immigrants that they can report crimes without fear of deportation -- and that makes the city safer.

And how can a city be safer when its own mayor tells the world that residents have a right to break federal immigration law, even to defy a judge's deportation order -- because they don't have to adhere to laws they don't like?