A Massacre, Up Close and Banal 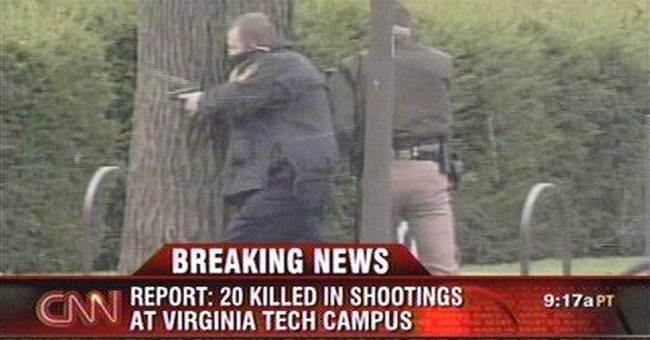 Now the great American post-tragedy ritual: The news media search for formulas to prevent this sort of senseless massacre from ever happening again. No angle will be left unprobed. Stay tuned to learn which political persuasion you should blame -- take your pick, we'll give you facts to back any opinion -- and how new policies and smart thinking can protect your family.

Watching and reading coverage of the Virginia Tech killings, you see a disconcerting tumble of angles and observations, as journalists desperately try to bring light to a dark universe. But there is little light, and lots of noise.

Next up: How Virginia Tech officials could have prevented the shootings. Why weren't classes canceled after the first double murder? Where was the warning system?

Retrace 23-year-old shooter Cho Seung-Hui's steps. How could hours have elapsed between the first double murder and the second spate of shooting?

Don't miss the video: Count the 27 gunshots captured on student's camera phones. The possum strategy: How one savvy student survived by playing dead. The view from Our Betters in Europe: When will gun-happy Americans learn? The French ask, why can't Americans be more like us?

Lax Virginia gun laws: How they allowed a dangerous mentally-ill noncitizen student to buy handguns legally. Are more guns the answer? The gun lobby argues that students with concealed weapons could have stopped the shooter. Columbine parents speak. English professor reveals that she warned that the eccentric loner needed counseling. His violent essays set off alarms, yet the system failed. How could this happen?

Experts debate which form of counseling would have stopped Cho. Multicultural candlelight vigil unites community. Was football coach Frank Beamer right to cancel the Hokies' Saturday spring game? What would the victims have wanted the team to do?

Warning signs: Cho hated the spoiled "rich kids" on campus. Tips on how to spot the next rage killer. Why do people in post offices, high schools and colleges become targets? Mail carriers respond to the term "going postal."

Studies establish link between gun violence and videogames. Shooter's family seemed friendly. Anti-bullying classes designed to defuse ticking time bombs. April: The big month for death and taxes. The blame game: Who's to blame? Knee-jerk reactions to knee-jerk reactions. Cho's movie script revealed an inner rage. When to know when violent copy is not entertainment. The impact of 24-7 news coverage of school shootings on your children. The 32 victims: They were actual people. Enough already. After the tragedy, comes the noise. Headlines scream that America is mourning, but mostly you just hear babble.

There is much that is unseemly about how we in the media twist a horrific episode like this and make it about not the students and faculty who died, but about everyone else, about us, about journalists, viewers and readers.

In this short attention-span nation, people know how to opine, speculate and second-guess. We take other people's agony and irreparable loss, and turn their pain into a soap opera. We do everything well but grief.