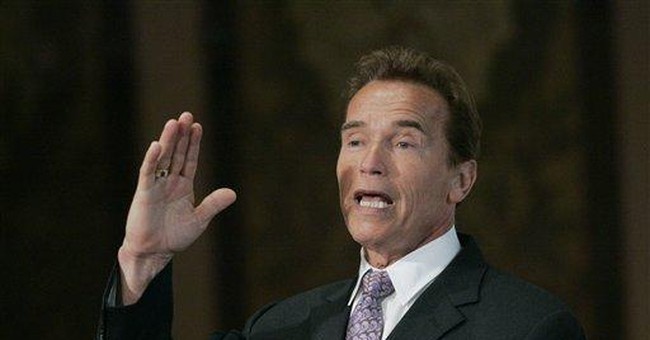 Last week, every GOP state senator and assemblyman, except for Sacramento Assemblyman Roger Niello, signed the Americans for Tax Reform's no-tax-increase pledge. As GOP operative Jon Fleischman wrote on flashreport.org, "enough state legislators have signed the ATR Taxpayer Protection Pledge to guarantee that there is not the required two-thirds vote in either the state Senate or the state Assembly to pass a tax increase."

Today of all days, April 15, the subject of taxes is a raw one. I don't want to pay higher taxes, but I don't think that state lawmakers should sign such a pledge.

For one thing, the Republicans may have agreed not to pay higher taxes, but they did not sign a pledge to pass a balanced budget. The state's nonpartisan legislative analyst, Elizabeth Hill, now warns that Gov. Arnold Schwarzenegger's proposed budget is expected to run $2.7 billion in the red -- which the governor's office refutes. As Niello, who is vice chair of the Assembly Budget Committee, noted, the state has not produced an honest budget since 2000-2001.

In effect, then, the ATR pledge is a promise to pass yet another budget that spends more than the state takes in.

Call it all smoke, no fire. ATR honcho Grover Norquist told Fleischman, "Only when tax increases are off the table will politicians in Sacramento be forced to actually govern."

And, "Tax increases allow politicians to avoid the tough questions and the tough actions."

Yeah, but: It has been four years since California voters recalled Gov. Gray Davis after he trebled the vehicle-license fee. Since then, Sacramento essentially has stopped raising general taxes, yet state spending has continued to spiral upward.

Tax increases have been off the table, but Schwarzenegger -- who also says he will not raise taxes -- is not being "forced to actually govern."

Feckless, sure. But tough -- don't make me laugh. If anything, this Legislature is famous for meddling in citizens' kitchens (no trans fat), nurseries (no spanking) and dog houses (no breeding). The last place you will find Sacramento lawmakers rolling up their sleeves is in their own backyard, where, after six budget shortfalls, they should be hard at work controlling state spending.

Be it noted that the biggest spenders in Sacramento are the Democrats, who have opposed every reasonable attempt -- most notably the 2005 budget-reform measure Proposition 76 -- to curb state spending. Left to their own devices, I suspect, the Dems would go so overboard that voters would send them to go live with Gray Davis.

No Democrat signed the ATR pledge. State Democratic Party spokesman Roger Salazar explained, "You don't want to leave out any options when it comes to good schools, healthy children and a clean environment."

Salazar makes it sounds as if Sacramento Dems are responsible. Wrong.

Democrats would not sign the pledge because they like to pretend that they can balance the budget by raising taxes on the rich. They know that taxes on the wealthy tank during a recession -- which is how California ended up with a $35 billion shortfall in 2002.

Niello, who told me he does not believe in signing pledges, nonetheless argued that Republicans should say "no" to new taxes because, "It is more responsible to hold out as strongly as we can for a budget that is balanced without raising taxes." Many Republicans think they owe that much to their base.

Besides, Norquist told me, if Republicans agree to tax increases, Democrats will spend even more. Norquist has studied other tax increases, he said, and, "Every time you raise taxes a dollar, spending goes up $1.20."

The no-new-taxes pledge should be a bad idea because the Republicans are in the minority in the Legislature, and lawmakers are supposed to compromise. That's their job. In Sacramento today, there is no honest compromise. There are instead two parties dishonestly colluding.