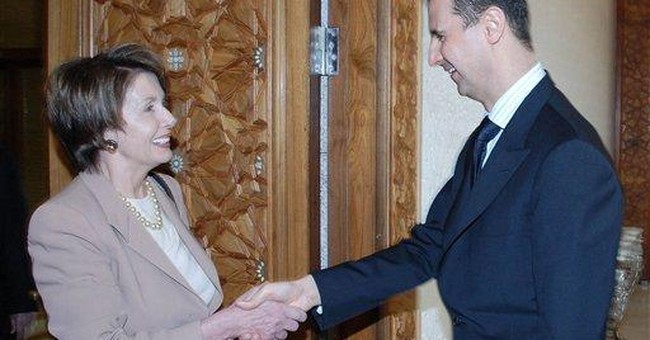 House Speaker Nancy Pelosi apparently is willing to meet with Syrian President Bashar Assad -- even though Syria has supported terrorist organizations Hamas and Hezbollah and allowed terrorists to cross the Syrian border with Iraq to attack U.S. troops -- but until late Wednesday, she would not accept an invitation from the president of the United States to discuss legislation to continue funding for the Iraq war.

At a hometown press conference Tuesday, Pelosi explained: "What the president invited us to do is to come to his office so that we could accept, without any discussion, the bill that he wants. That's not worthy of the concerns of the American people. And I join with Sen. (Harry) Reid (D-Nev.) in rejecting an invitation of that kind."

If Pelosi's Tuesday logic -- meet with Assad, but not Bush -- doesn't work for you, consider her spin on her recent trek to the Middle East. Rep. Tom Lantos, D-Calif., chairman of the House Foreign Affairs Committee, joined Pelosi at her press conference, where he crowed, "It was on a scale of 10, a 10, and the United States foreign policy was dramatically advanced by the speaker's mission."

Funny, when in Syria, Pelosi said, "There is no division on policy between us and President Bush -- be it on Israel, Palestine or Syria."

Sooooooo: The Pelosi mission was a 10 out of 10 -- because Pelosi and company advanced Bush's foreign policy? It helps if you forget that while in Israel, Lantos announced, "We have an alternative Democratic foreign policy." And forget that the Bush policy is to not call on Assad. I don't understand why Pelosi can't be honest about the fact that she was deliberately undercutting Bush. Maybe the speaker was shaken by editorials that took her to task for overstepping her powers as she moonlights as a general and a diplomat.

The Washington Post chided Pelosi for her "foolish shuttle diplomacy," most notably her "ludicrous" assertion that Israeli Prime Minister Ehud Olmert had asked her to deliver the message to Assad that "Israel was ready to engage in peace talks" with Syria. The Olmert government promptly issued a statement correcting Pelosi -- and the record.

The Post harrumphed over the speaker's misstep -- and her equally wrong-headed claim that Assad was ready to "resume the peace process" -- thus: "Ms. Pelosi not only misrepresented Israel's position but was virtually alone in failing to discern that Mr. Assad's words were propaganda."

While the Los Angeles Times editorial page opined that the Bushies' criticism of the Pelosi trip was "off-base," the Times, as well as the Post, has editorialized against the House bill that would tie war funding to a troop-withdrawal timetable. Under the headline, "Gen. Pelosi?" the Times criticized the Democratic House for trying to micromanage the war and tie the military's hands.

Before November 2006, the Dems could take unlimited potshots at Bush. But as Pelosi is discovering, now that she is speaker, there are consequences to her rhetoric.

This is why the lame lament repeated by Lantos -- that Republicans, including Rep. Darrell Issa, R-Calif., also have gone to Syria -- falls flat. Everyone knows that a speaker's words carry more weight than those uttered by rank-and-file members.

More to the point, inside the Beltway, it is bad form for the other party to undercut a sitting president outside American borders.

Sure, some of the criticism from the right has been cheap and low. Former Massachusetts Gov. Mitt Romney was wrong to fault Pelosi, who has excellent manners, for wearing a head scarf.

But the speaker's words bring into question whether she has the courage of her convictions. Pelosi won't be honest about undermining Bush abroad. After bashing Repubs for overspending, Team Pelosi larded the $124 billion supplemental war spending bill with $20 billion in pork.

Tuesday, Pelosi lauded Lantos for his longstanding attempts to meet with the Holocaust-denying Iranian President Mahmoud Ahmadinejad -- but then she didn't want to sit down with Bush. Later, she changed her mind.

On "60 Minutes" Sunday night, Sen. John McCain, R-Ariz., said, "I'd rather lose a campaign than lose a war." Does anyone believe the same of Nancy Pelosi?