A journalist in his own mind 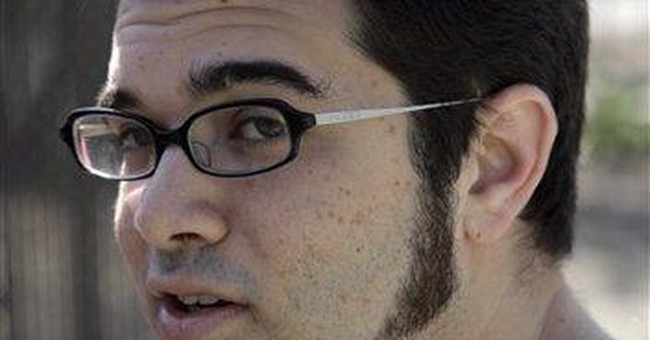 There is an old journalist's saw that says you shouldn't let the facts get in the way of a good story. No wonder newspapers, including The San Francisco Chronicle, have referred to blogger Josh Wolf, 24, as "the longest imprisoned journalist" in America. There is, after all, nothing more seductive to those in this profession than a story about a plucky journalist who stands up to authoritarian power and goes to jail to preserve his right to protect his sources. So who cares if Wolf is not a journalist?

This story begins with a violent 2005 demonstration in San Francisco against the World Trade Organization. Wolf, who describes himself as "artist, an activist, an anarchist and an archivist," videotaped the melee and sold a "selected portion" of the tape. The feds subpoenaed the full tape and wanted Wolf to testify about what he saw. Wolf refused -- on the grounds that, as a journalist, he needed to protect his sources. He went to jail.

This week, some seven and a half months later, Wolf was released after he posted the full video on his Website and signed an affidavit asserting that he did not know who attempted to torch a police car and could not help identify who fractured San Francisco Police Officer Peter Shields' skull.

Here's how you know that Wolf was an activist with a camera and not a journalist: Wolf did not care to chronicle the attack on Shields.

In a recent interview, Yahoo correspondent Kevin Sites asked Wolf, "If there had been a situation where you saw a protester beating up a police officer, or you saw them committing arson, would you have shot that?"

"I wasn't there to shoot that," Wolf answered. Pressed again, Wolf said, "That's a question I would have made in that moment."

You get the picture. Let me note that I think it was wrong -- oppressive even -- for the U.S. attorney's office to put Wolf in prison for months when he had committed no crime. While the U.S. attorney's office has argued that it was leaning on Wolf in order to find out who fractured Shields' skull, Chronicle staff writer Bob Egelko reported last month that no one in that office had bothered to question Gabriel Meyers, the only demonstrator charged by San Francisco District Attorney Kamala Harris in a related crime.

For his part, Shields is not happy with Harris, who dropped the charges against Meyers and has a weak record on prosecuting violent demonstrators. He believes the city should be tougher on those who trash neighborhoods and injure cops.

Shields saw Wolf on a local TV station Wednesday morning, as Wolf said he planned on interviewing Tony Serra, the attorney who had just served time for his third tax-evasion conviction and is now suing to increase the wages of federal prisoners.

"I don't understand how people don't see this," Shields told me, "how they don't realize that Josh Wolf and Tony Serra can make rules up as they go along to fit their needs, while anybody else, we need to abide by rules."

When I read that quote to Wolf, his response was, "What does Peter Shields think about Henry David Thoreau?" Not, Wolf told me, that he was comparing himself to Thoreau. Wolf also evokes the name of pamphleteer Thomas Paine -- not that Wolf is saying he is like Paine. Wolf says he just wants the same protection that Paine should have today. Thing is, Wolf has that protection. Like any citizen, Wolf has the right to express his opinion.

The issue here is whether Wolf should be protected by shield laws designed to protect real journalists who need to protect their sources. In Wolf's ideal world, he would qualify, not because he follows journalistic practices, but because he disseminates information to the public.

Of course, Wolf's cause appeals to the liberal sensibilities of the Special City. If a kid anarchist is willing to go to jail because he thinks he's a journalist, he must be a journalist. He feels so strongly about it. Damn the consequences.

I asked Wolf: Should an anti-abortion blogger be able to use a shield law to protect the identity of an activist who beat up a clinic worker? He answered, "There should be some level of protection, yes."

And Ess Eff pols, including the district attorney, support Wolf. Be careful what you ask for, San Francisco.