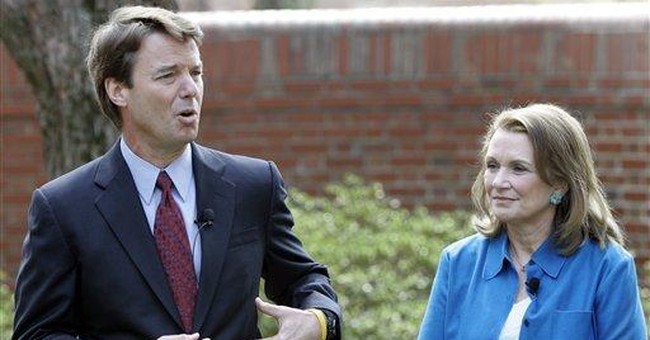 Of course John Edwards is still running for president. Edwards and his wife, Elizabeth, who announced last week that she has bone cancer, are ambitious, political people who have had their eyes on the White House for years. As their public statements have made clear, Elizabeth Edwards wants her husband to be president as much as he wants the job -- and she is not going to let cancer get in her way.

Critics ask: How can Edwards put his sick wife through a campaign? Please. A presidential campaign is such a grueling, vicious and all-consuming grind that most husbands would not put a healthy wife -- or their children, or for that matter, themselves -- under the harsh microscope of a White House bid.

Political families are a different animal. For better and for worse, they look at every aspect of their lives through the lens of their political goals. When the Edwardses heard the rotten news, you just know that the potential effect on the 2008 bid was one of their first considerations.

As it turns out, Mrs. E's cancer has brought needed attention to Edwards' presidential run. A week ago, Sens. Hillary Clinton and Barack Obama were soaking up all the media attention. Yesterday, Elizabeth Edwards was the big story. CNN even announced that she was sick of seeing herself on TV.

It helps that Elizabeth Edwards confronted her diagnosis with a steady grace. She provided Americans with a solid template on how to absorb a cancer diagnosis. When she announced that her cancer was back last week, she was upbeat about her odds in holding her cancer at bay -- which has to increase her prospects -- yet clear in the knowledge that bad things happen to good people.

Most important, Elizabeth Edwards told "60 Minutes," "Either you push forward with the things that you were doing yesterday or you start dying."

And: "I do want to live as full and normal a life as I can from now on." Amen to that. Are the Edwardses using an illness for political gain? Roger Salazar, a California Democratic Party spokesman who worked for Edwards in 2004, rightly noted that when life gives you lemons, you make lemonade. And, "The fact that they're willing to do this even through adversity shows a grace under fire that I think is a quality I want in our presidents." Salazar argued that the couple's behavior goes to their character.

OK, but there is a downside if voters see Edwards as milking family pain for political gain. Edwards frequently cites the car-accident death of his 16-year-old son Wade -- the former senator wears Wade's Outward Bound pin on coat lapels -- as a catalyst for his entering politics.

Now Edward's wife's cancer is being used to bolster his candidacy. "One of the reasons I want to be president is to make sure every woman and every person in America gets the same kind of things that we have," John Edwards said over the weekend.

Edwards also told "60 Minutes," "Do not vote for us because you feel some sympathy or compassion for us." And he'll say as much, every time a camera shows him talking about his wife.

GOP political consultant Ken Khachigian recalled a day when politicians tried to hide an illness -- they wanted to look strong. Now, cable news has become all-personal-tragedy-all-the-time, and personal problems have an upside.

Khachigian mused, "It's hard to know what the stopping point is. I guess you'll know it when you see it."