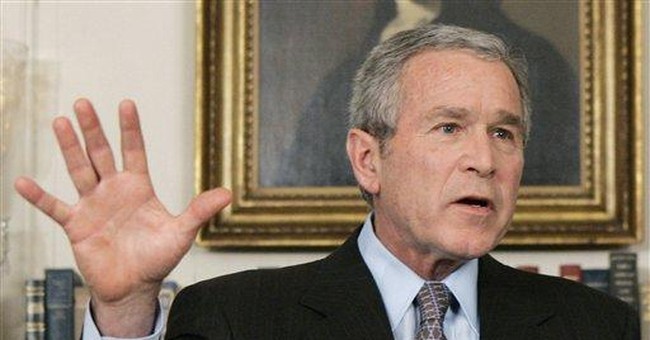 Salt Lake City Mayor Rocky Anderson wants to impeach President Bush. In arguing that point, he asked Fox News' Bill O'Reilly on Tuesday, "Have you seen the National Intelligence Estimate that was provided in October of 2002, in which the intelligence agency under the State Department said that Iraq was not building up a nuclear capability, that this whole story about the aluminum tubes (reportedly sought by Saddam Hussein in Niger) was completely off base?"

I decided to re-read the NIE excerpts that the administration released. What does the report say? "Baghdad has chemical and biological weapons as well as missiles with ranges in excess of U.N. restrictions; if left unchecked, it probably will have a nuclear weapon during this decade." The NIE also reported that Iraq had "expanded its chemical and biological infrastructure under the cover of civilian production," that Baghdad had renewed production of mustard and sarin gases, and that Iraqi missiles could threaten the "U.S. homeland."

Yes, the NIE key judgments reported that some officials in the State Department did not believe Saddam Hussein was pursuing a "comprehensive approach to acquire nuclear weapons." But the report also noted that, "Most agencies assess that Baghdad started reconstituting its nuclear program about the time that (U.N. weapons) inspectors departed -- December 1998."

So let us review the Bush-lied argument that Anderson and other war critics espouse. They say Bush lied about WMD, when, in fact, America's best intelligence presented no doubt about Iraq having chemical and biological weapons of mass destruction. And according to the NIE, most intelligence agencies also believed Iraq had been working on nukes for four years.

Here's another point that the Bush-lied misinformation campaign has forgotten. While war critics point to Bush's inclusion of this sentence -- "The British government has learned that Saddam Hussein recently sought significant quantities of uranium from Africa" -- in his 2003 State of the Union Address as proof that Bush misled the country into war, Bush uttered those words three months after Congress voted to authorize the use of force in Iraq.

Bush Lied is the Big Lie. It takes the controversy over one aspect of U.S. intelligence on Iraq's WMD -- the nuclear program question -- to argue that the whole WMD argument was bogus. That is, the president's accusers are guilty of the very sort of dishonest selectivity that they accuse Bush of using.

By going along with the Bush-lied spin, by refusing to acknowledge that the intelligence community presented strong reasons to vote for war, these Democrats have boxed themselves into a corner. They now have only one rationale for their vote that they can use -- they were duped by the nincompoop Bush -- or one rationale that they cannot use -- they sent U.S. troops to Iraq against their better judgment but out of naked ambition.

And the dishonesty now has placed House Speaker Nancy Pelosi in the uncomfortable position of pushing for passage of a bill to continue funding a war into next year that the grassroots believe was based on a lie.

So how does Pelosi plan on getting the House to pass the Iraq spending bill? As The Washington Post reported, the Democratic leadership has larded the U.S. Troop Readiness, Veterans' Health and Iraq Accountability Act with pork. After all the (deserved) rhetoric decrying Republican big spending, the Democratic leadership inserted $25 million for spinach growers, $75 million for peanut storage, and $120 million for shrimp and Atlantic menhaden fishermen into the supplemental spending bill.

The idea is to sweeten the pot so that war opponents will agree to fund a war they oppose, while war supporters will vote for the bill, despite provisions the seem to be designed solely to undermine the Bush surge.

Pelosi frequently says that President Bush must heed the message that American voters sent in November 2006. Who knew that message was to fund the war while undermining the war effort and to spend more tax dollars on pork?