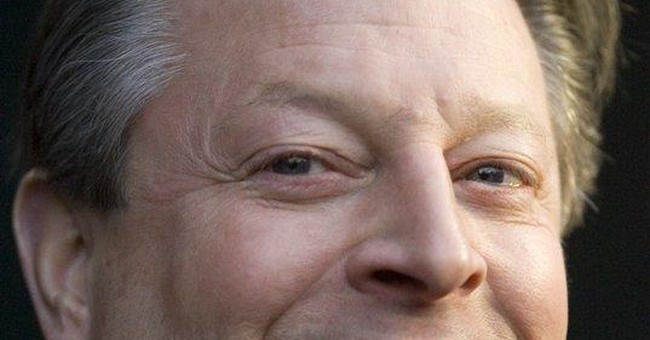 Al Gore's movie, "An Inconvenient Truth," was billed as "a passionate and inspirational look at one man's fervent crusade to halt global warming's deadly progress in its tracks by exposing the myths and misconceptions that surround it." But right after the movie won an Oscar for best documentary, America learned that Gore's crusade ends at his front door.

A conservative think-tank, the Tennessee Center for Policy Research, released a press release that showed the Gores spent $30,000 a year on energy for their suburban Nashville home -- and burned 221,000 kilowatt-hours last year, or 20 times the national average. The reaction of Gore's spokesperson is instructive. Kalee Kreider told ABC News' Jake Tapper, "I think what you're seeing here is the last gasp of the global warming skeptics. They've completely lost the debate on the issue, so now they're just attacking their most effective opponent."

Kreider is right, in a way. Gore is the most effective global-warming advocate in America. Yet somehow Gore has little problem doing a lot of the very thing he tells the rest of the country not to do -- that is, burning more energy than is necessary.

The message comes across loud and clear: The Gores are rich, and rich people are going to burn a lot of energy. They won't let their belief in global warming crimp their lifestyle.

That's why "Inconvenient Truth" producer Laurie David can boast on the movie Website that she is "committed to stopping global warming," denounce people who drive SUVs -- and still fly in private Gulfstream jets. (Having been blasted in the press for her high-flying ways, David told ABC last year that she was cutting back on her private-plane travel. Talk about commitment.)

And let us not forget two other California pioneers on climate change -- California Sen. Dianne Feinstein and Gov. Arnold Schwarzenegger, both owners of multiple SUVs and users of private planes.

Fear not, however, because Gore, like those wonderful folks who put on the Oscars, is "carbon neutral." As Kreider told ABC, the Gores "purchase offsets for their carbon emissions to bring their carbon footprint down to zero."

I used to figure that rich sinners, who bought "indulgences" from the Catholic Church before the Protestant Reformation, would be ashamed of the bargain that other churchgoers looked upon with scorn and derision.

But lo, on Academy Awards night, the stars were quite impressed with themselves for participating in a "carbon-neutral" event. Cozy up to the Natural Resources Defense Council, and all those private flights, limo rides and multiple homes disappear. Almost like special effects.

I know that the word on many readers' lips is: hypocrisy.

But the real issue is that the most effective spokesman for global warming apparently doesn't think he has to show personal leadership on his signature issue by curbing his energy consumption. The same goes for Feinstein and Schwarzenegger, who are happy to push for laws that make other people cut their emissions, but are far too affluent to cut back themselves.

"With the future so open to doubt," Gore wrote in his 1992 book "Earth in the Balance," "we routinely choose to indulge our own generation at the expense of all who will follow."

Now Gore has a spokesperson who explains his indulgence -- er, offset -- policy. And it apparently doesn't matter that Gore's behavior signals to global-warming agnostics (like me) and to global warming believers that the climate situation must not be that dire after all.

In fact, watching Gore's conspicuous consumption, you have to wonder whether he really believes in global warming at all.