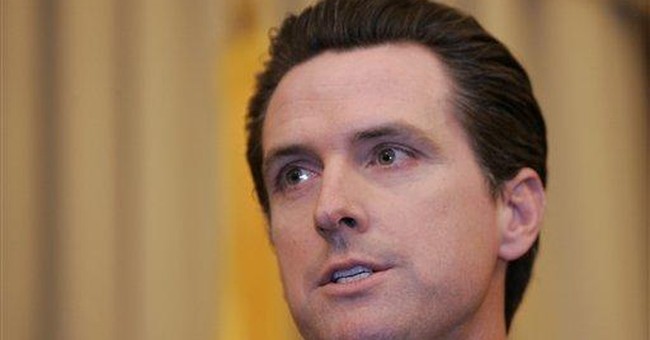 It's time for the 39-year-old boy mayor to grow up. Look, I'd rather not be writing about Gavin Newsom's personal life. Newsom has been a good mayor for San Francisco, and that is what counts the most.

Like many who have watched him, I've tended to figure that, as Newsom is divorced, good-looking and holds a high-profile political office, he's going to get around.

When Matier and Ross reported that Newsom had been dating 20-year-old Brittanie Mountz, I questioned, not for the first time, his judgment. I wondered what Newsom would have to talk about with one so young -- if they talked. But it was his personal life. If Mountz was seen drinking what looked like a glass of wine in public, someone may have broken the law -- but there are bigger wrongs in this wide world.

Then there was the chatter about Newsom showing up at the hospital well into his cups to comfort the family of slain police officer Bryan Tuvera. Again, it was late on a Friday night. I thought, well, even a mayor is entitled to some time off the clock. Let him be human.

Newsom's admission that he had an affair in 2005 with his campaign manager's wife, however, is impossible to overlook. Newsom not only betrayed Alex Tourk, a friend and onetime deputy chief of staff, but raised the question of Newsom's character. He betrayed a friend and loyal aide, let down his staff and lost his patina of professionalism. The affair was not simply bad judgment, it was cruel.

And stupid. Now voters have to ask themselves: If Newsom could treat a good friend as he treated Alex Tourk, how does he treat people who aren't his friends?

This time, Newsom didn't blame the media. He told reporters: "I want to make it clear that everything you've heard and read is true, and I am deeply sorry about that. I am deeply sorry, and I am accountable for what has occurred.''

At least City Hall is not trying to spin this as, "Everyone lies about sex." And at least he's not shifting the blame for his behavior by going into rehab. Spokesman Peter Ragone told me Newsom will get back to work -- "also realizing that he has a lot of personal work to do."

I followed Trent Rhorer -- the mayor's homeless czar who has worked so hard to get the homeless off the streets and into programs -- as he left the press conference in City Hall Thursday morning. "I'm not going to talk about it," Rhorer said.

It is people like Rhorer -- who have stuck out their necks to do unpopular but necessary work -- who have reason to be angry.

Does this, as political consultant Jack Davis of public-sex-party fame suggested, mean Newsom should resign? No, Newsom was elected to run the city. Pitiful as it may be, Newsom is the only buffer protecting San Francisco from the whims of a board of supervisors hostile to businesses and homeowners.

As for that "personal work," it could start with Newsom acknowledging that he is too old to play the boyish charm card. Hizzoner may look in the mirror and see a don of Davos, but to the public, he looks more like San Francisco's Miss USA.

Make that San Francisco's middle-aged male version of Miss USA. I recognize that some readers look at this story and blame the media. Be assured that the many reporters, photographers and TV cameramen in the room -- and I was one of them -- are hardly proud that this story attracts this much press. But it's too big a story to skip.

The last time a San Francisco mayor attracted this much attention, it was 1995. Then-Mayor Frank Jordan had taken a shower, naked, with two disc jockeys -- in front of a photographer. Jordan's attempt to appeal to young voters lost him any chance of being re-elected. Jordan was and is a good man -- but Ess Eff voters couldn't forgive him for looking so, well, dumb.

Some voters may view this extramarital affair as a sophisticated liaison between consenting adults. But in the hardball world of politics, having sex with your appointments secretary, who also happens to be married to your deputy chief of staff, and then making the cuckolded husband your campaign manager -- that's dumb, arrogant and just plain wrong.