Can Bush learn from Schwarzenegger? 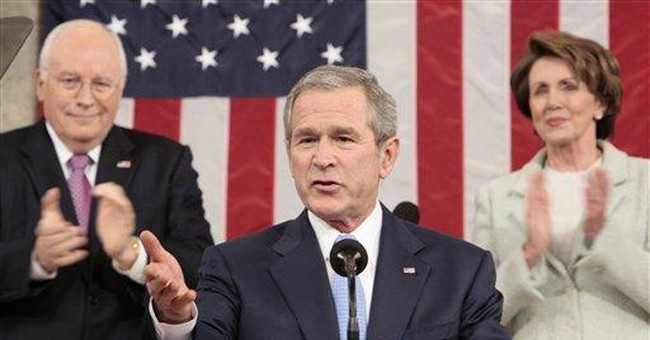 President Bush -- whose approval rating has fallen to 35 percent -- seemed to borrow a page from the Team Arnold playbook when he delivered his State of the Union Address Tuesday night. The Bushies should want to mimic Gov. Arnold Schwarzenegger's impressive turnaround. In 2005, only one-third of California voters approved of the governor. In 2006, Schwarzenegger handily won re-election and a majority of voter approval.

How did Schwarzenegger do it? The governator admitted that he erred in holding a special election, assured voters that he got their message and promised to play better with state Democrats. Bush lacked Mr. Universe's exuberance when eating humble pie. Nonetheless, Bush was gracious as he addressed "Madam Speaker" Nancy Pelosi and acknowledged that he was addressing, for his first time, a Democratic Congress. Harkening back to the "uniter" rhetoric of his 2000 campaign, Bush observed, "Our citizens don't care which side of the aisle we sit on -- as long as we're willing to cross that aisle when there is work to be done."

As California GOP Chairman Duf Sundheim noted, Bush and Schwarzenegger both have tapped into the public's desire to "move forward" and get things done.

On the issues, Bush moved into areas that Democrats have claimed. He pledged to reduce the federal deficit -- and yes, I know that he kept signing spending bills that changed the Clinton-era federal budget surplus into a $248 billion federal deficit.

On health care, Bush did not match Schwarzenegger's call for universal health coverage. Then again, Bush probably won't have to retreat from his proposal -- as Schwarzenegger already has by not including illegal immigrant adults, as promised.

Bush and Schwarzenegger have radically different approaches on health care. Schwarzenegger went with a model that requires most employers to provide health care for their workers or pay into a fund. Bush wants more Americans to own their health care as the best way to curb rising costs.

On the policy, Bush may be right that only private policies will cut costs. But politically he is completely out of touch with how Americans think about health care -- and he said nothing Tuesday to move public opinion.

On climate change, Bush has learned that when it comes to greenhouse gas, hot air rises. President Clinton did next to nothing about automobile fuel-efficiency standards and never even tried to ratify the Kyoto global warming pact, but he said he supported Kyoto -- and that gave him big environmental cred.

Schwarzenegger signed a bill to cut California greenhouse gases by 25 percent in 2020, 10 years after he is out of office -- and that makes him a green governor. Bush already has increased fuel-efficiency standards for light trucks and SUVs, more than Clinton ever did, but critics only notice that he rejected Kyoto. Now he's promising big gasoline reductions in the future, too.

Big promises sell better than small but actual remedies. One big difference between Bush and Schwarzenegger: The more Schwarzenegger tries to do his job -- balance the state budget and reform state government -- the worse he fares in the polls. Bush, on the other hand, has sunk in voter approval precisely because voters feel that he failed as an executive on Iraq and Hurricane Katrina. By doing his job better, Bush should be more popular. Tuesday night, Bush showed that he has the courage of his convictions -- while Democratic leaders do not.

"Whatever you voted for," Bush told Congress of its passage of the Iraq war resolution, "you did not vote for failure."

Then, on Wednesday, the Senate Foreign Relations Committee did vote for failure -- or at least it passed a nonbinding anti-troop surge resolution. Lt. Gen. David Petraeus had told the Armed Services Committee Tuesday that such an action would embolden Iraqi insurgents.

For years, Democratic critics have faulted Bush for not listening to military leaders on troop strength. By military leaders, the critics meant not Army Gen. Tommy Franks, who got the number of troops he wanted, but Gen. Eric Shinseki, who wanted many thousands more U.S. troops in Iraq.

Now Bush is listening to Petraeus, who told Congress he needs 20,000 more troops -- and the critics are not heeding what the brass say they need. A recent Fox News/Opinion Dynamics poll asked Democrats if they personally wanted the new Bush plan to succeed in Iraq, and 51 percent of Democrats said yes, while 34 percent said no and 15 percent didn't know. So they shouldn't get indignant when those who support the war question the patriotism of some war critics.

Let me acknowledge that war opponents have done a service to the extent that they have sent Iraqi Prime Minister Nouri al-Maliki the message that U.S. troops will leave if he does not reform. But when senators vote for resolutions that have no effect other than to undermine the war effort, you cannot respect that vote. It lacks conviction and purpose.