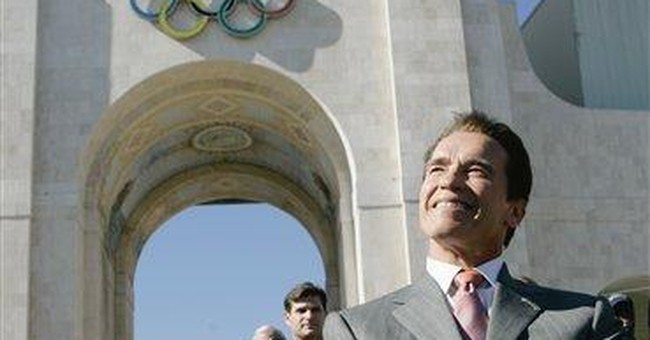 If you wonder why Sacramento can't balance a budget, see what happens when Gov. Arnold Schwarzenegger exercises a modicum of fiscal discipline in his proposed $143 billion state budget.

Since Schwarzenegger became governor, the state has continued to spend more money than it takes in. Nonetheless, no matter where he tries to cut, the minute he proposes a cut in any program, he becomes Scrooge, as Democratic lawmakers bemoan that Schwarzenegger is no longer bipartisan. (In Sacramento, bipartisan means Schwarzenegger spends as much as Democrats want to spend.)

In this go-round, Schwarzenegger tried to save money by moving $1.1 billion from public transit spending to fund school bus service, transport the developmentally disabled and repay infrastructure bonds -- all transportation related.

Critics and editorial writers promptly assailed Schwarzenegger for robbing public transit systems of $1 billion and thereby sullying his enviro credentials. But it is not that simple.

The $1.1 billion comes from the "spillover" fund -- which produces windfall revenue when gasoline prices spike. Since the fund began in 1972, there have been many years with no spillover dollars at all. In recent years, with higher gasoline prices, spillover funds have risen from zero to some $600 million in this budget year. In 2007-8, the spillover is expected to reach $1.1 billion.

"You don't want to build an operating budget based on a windfall," noted H.D. Palmer of the Department of Finance. If transit agencies incorporated those funds into their normal operating budgets, they would be swimming in red the minute the price of gas drops.

Team Arnold's budget moved that money into the general fund. The California Legislative Analyst's Office questions whether the law will allow the state to do so -- but if it is legal, Schwarzenegger will have found a way to fund transportation for school kids and the developmentally disabled while stabilizing the general fund. When transit agencies look at what they had been getting from the spillover fund, not what they might have reaped next year, it could be argued that they lost about $300 million. Even in Sacramento, that's not $1.1 billion

Team Arnold argues that there is no cut because Schwarzenegger also proposed to apply $600 million of bond money from the 2006 voter-approved bond measure Proposition 1B toward transit projects.

Transit officials are quick to point out that the 1B bond money was supposed to fund new projects. Randy Rentschler, spokesman for the Metropolitan Transportation Commission, argued that voters have passed two measures that directed Sacramento to spend gas-tax money on transportation only. So voters expect their gas-tax dollars to go toward transportation.

"How many times do the voters have to vote to place the sales tax on gasoline for transportation purposes?" Rentschler asked. "They've had to do it twice now."

He makes a good point, except that voters have passed a host of measures that conflict with each other. In recalling Gov. Gray Davis, California voters made known their opposition to his hike of the vehicle license fee. Other measures set up special funds to protect pet programs. As a result, no governor can give the voters everything they've asked for at the ballot.

Californians say they want their tax dollars to fund public transit, but when they vote with their feet, they put their foot on a gas pedal. As Schwarzenegger's office notes, California spends about a third of the state's $24 billion in transportation dollars on public transit, yet a mere 2 percent of trips made use of transit. If Schwarzenegger observes what people do, rather than listening to what they say they want, his budget move makes sense.