There Ought Not to Be a Law on Spanking 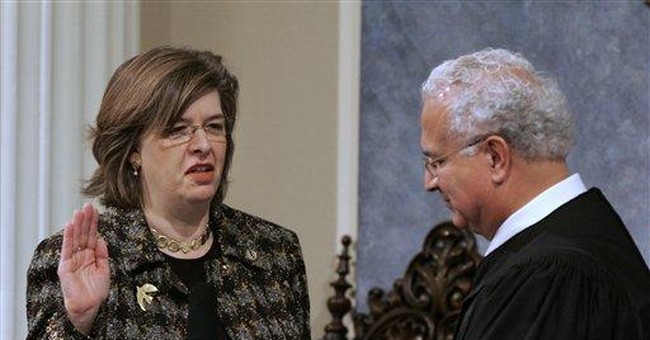 Democratic California Assemblywoman Sally Lieber has announced that she will introduce a bill this week to make it a crime to spank children who are 3 years old or younger, punishable by up to a year in jail or a $1,000 fine. If this zany idea were to become law, California could be the place where the nanny state meets the authoritarian state.

It is more than ironic that a politician who wants to make it illegal for parents to apply their flat hands to their babies' bare bottoms is more than happy to allow the heavy hand of the law to yank parents from their homes and place them behind bars for disciplining their own children in the way that they see fit and does not injure a child.

"I think we ought to have a law against beating children," Lieber told The San Francisco Chronicle last week.

That's the problem. California does have laws against beating children. But in this politically correct atmosphere, do-gooders believe it is their right to pass laws that expand definitions beyond reason so that a spanking is a beating -- when it isn't.

In effect, this is what Lieber really is saying in proposing such a law: I know how to raise your kids, and I am going to make it illegal for other parents to discipline their children in a way I do not like. If you don't do it my way, you can go to jail.

That's not how Lieber sees it, of course. She told me, "I haven't heard any convincing arguments as to why anyone would want to swat a 6-month-old or 1-year-old." As Lieber sees it, spanking is "not effective," as children under 3 "don't understand it." And: Spanking trains children "in violence and domination, even when it's moderate."

While Lieber may believe that she is trying to protect children, it's hard to see how a big fine or putting mom or dad in jail for a spanking could be even remotely in a toddler's interest.

Let me be clear. I am not defending spanking. Like Lieber, I don't think spanking is effective and there are better ways to discipline children.

I just happen to believe that California cops have their hands full dealing with adults who beat, torture or otherwise abuse children. Take the case of Oakland's Chazarus Hill Sr., 27, who beat his 3-year-old son Chazarus "Cha Cha" Hill Jr. to death in 2003 after the poor boy wet his bed and made mistakes recognizing flash cards.

Cha Cha had been beaten repeatedly before his father killed him -- and I want police to concentrate on finding and going after adults like Hill. California law rightly gives law enforcement the tools to prosecute such parents -- and it is on such cases, of bodily injury, that the law should and must focus.

Lieber mentioned the Hill case over the phone -- which is wrong-headed because Hill was beating his son with deadly weapons, switches and belts, for weeks before he killed him.

Joseph D. McNamara, a retired police chief of San Jose, Calif., and now a research fellow at Stanford's Hoover Institution, told me that if he were a beat cop, he would be "horrified" at the prospect of enforcing a spanking ban.

Such a law would put police in "everyone's living rooms," where they would have to regulate parenting.

Or as Gov. Arnold Schwarzenegger so aptly put it when first told about the proposed law, "How do you enforce that?"

McNamara told me he never spanked his children, but he could conceive of instances in which good parents might choose to do so. Say a parent repeatedly tells a young child not to run into the street, or not to talk to strangers, or to stop hurting a younger sibling -- and words alone have not worked.

In such cases, parents -- not a Sacramento lawmaker -- know what best to do. And while Lieber told me she wants to draw a line that makes physical discipline a "black and white" issue, California parents have been dealing with shades of gray since before Lieber was in diapers. Parents are not stupid, they know the difference between beating and spanking, and they do not need her to draw the line for them.

What's next -- McNamara wondered -- a law against grabbing your kid by the arm? Pass such laws, he added, and you'll see a state in which "parents are afraid to discipline the child." As if that would be good for California families.

Lieber's response is that wife-beating once was off-limits to law enforcement, but in this enlightened age, the law does come between a man's fist and his wife's face. Again, she fails to distinguish between beating and spanking.

Just as some people choose not to distinguish between physical and verbal abuse.

Lieber explained: "Things have changed. Now we tell parents what to do and what not to do." The state makes adults use car seats for children, and there are laws to keep them away from lead-based paint.

Except spanking doesn't cause physical harm, as car accidents and lead paint can. And if spanking does injure children, it is illegal. This is more about philosophy than safety -- and California lawmakers don't have a right to mandate how parents think about raising their own kids. Those who want the government to stay out of the bedroom should not want it in the nursery or at the kitchen table, either.