A new license for illegal immigrants 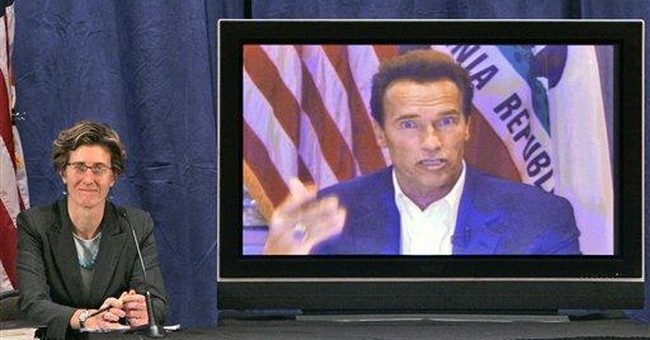 First, let me stipulate that Schwarzenegger deserves praise for attempting to tackle the thorny and thankless task of trying to provide health care for the 4.8 million Californians who lack health care at any given time. (You've seen the number 6.5 million, but that's for people who, according to the state, have lacked coverage "at some point" last year.) Also, Schwarzenegger is right to mandate that all Californians obtain health coverage.

As Team Arnold put it at Monday's press conference, his plan is based on "shared responsibility" and "shared benefit." Schwarzenegger deserves credit for increasing the Medi-Cal reimbursement to doctors and hospitals. For too long, Washington and Sacramento have dished out medical benefits without paying for them.

But Schwarzenegger was wrong when he said this about health coverage for illegal immigrants: "I don't think there is a question or debate that they ought to be covered." That argument was based on the fact that federal law already requires that hospitals provide emergency care for those who need it.

No one who needs emergency care can be turned away. So, Schwarzenegger extrapolated, providing nonemergency care is "realistic" and "not being in denial." "Realistic," according to the governor's office means that nearly 1 million undocumented workers will gain coverage if the package passes -- 40,000 through their (illegal) jobs, 160,000 by purchasing individual coverage, and the remaining 750,000 would have their coverage paid for by the state. (Read: Your tax dollars.)

And those numbers do not take into account the attraction of guaranteeing health care to all residents -- which, if you believe immigrants make smart economic decisions -- is bound to lead to a surge in the number of illegal immigrants who come to California. More undocumented workers will send for their families to join them, and others will decide that free health care provides an added incentive to break the law.

Joel Fox, president of the Small Business Action Committee, warned of "unintended consequences" of the package. Will the package work as a magnet? Yes, he answered. And: "It doesn't necessarily mean we're talking about people from Mexico. It could be people from Nevada, too."

So when you hear Schwarzenegger boast that his package will "create a model that the rest of the nation can follow" -- reach for your wallet. Various lobbies already are fighting over who pays for the plan. Schwarzenegger wants businesses that employ more than 10 workers to provide health coverage or pay 4 percent of payroll into an "in-lieu" fund that will bankroll health care for their workers. Schwarzenegger also wants to tax hospitals -- 4 percent of gross revenues -- and doctors -- 2 percent of revenues. Team Arnold argues that because Medi-Cal payments will increase, health-care providers can absorb the new tax.

The rub: This is, as California Medical Association President Anmol S. Mahal put it, "a tax on those who are sick." The CMA also fears an exodus of employers from private benefit packages to the in-lieu pool-- as the 4 percent fee just might save them money.

I fear that even at 4 percent, more employers will decide to hire off the books -- which means illegal workers will continue to use the emergency room and hospitals will continue to pass costs onto those who pay for their health care. That's why part of the package should be funded by a sales tax -- instead of a jobs tax and a health-care tax -- because that is one tax illegal immigrants pay.

Better yet, don't provide health care -- other than emergency and clinic care -- to illegal immigrants. Because the unintended consequences could cost billions, and the state already is running in the red.