What ever happened to "Let's Roll" 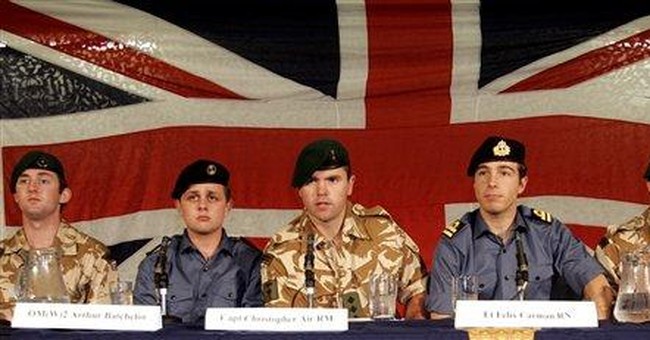 On 9/11, the passengers aboard United Flight 93 had an option – they could rely on the good intentions of their captors or they could fight back. When presented with this Hobson’s choice, they responded with the words “Let’s roll.” Their ensuing actions were the very definition of heroism.

A few weeks ago, 15 British seamen and marines, soldiers of the Royal Navy, found themselves in a similar quandary. Belligerent Iranians had surrounded them and threatened them with both words and actions. Just as the passengers on Flight 93 had a choice, so too did the British seamen who ultimately spent a couple of weeks as hostages of the Iranian regime. Why did these soldiers, the products of military training and representatives of Her Majesty’s flag, make the decision to surrender themselves? Because, according to their Captain at a Friday press conference, “Fighting back was simply not an option.”

What a strange and dismal trip it has been for the Western world, going from “Let’s Roll” to “Fighting Back Was Not An Option” in scarcely more than five years. One can only hope that when the history of our era is written, the former will turn out to be the immortal quote, not the latter.

IT MAY SEEM EASY AND UNSEEMLY FOR A KEYBOARD WARRIOR like me to criticize the conduct of the British troops. Perhaps it is too easy; I have never been in a situation comparable to the one these men (and woman) were in. I can’t say with any confidence how I would respond.

But I can say with some confidence how I would hope to respond; I hope my response would be nothing like that of the British seamen. And I’d like to think my life experience has helped me arrive at this worldview. A half-decade of serious illness has forced me to accustom myself to looking death squarely in the eye on an ongoing basis. At some point, you come to a realization that death is inevitable. And you also come to appreciate that there are things worse than death. Just as there are things worth living for, there are things worth dying for. One’s own honor and especially the honor of one’s country must be among those things if you don the uniform of your country’s military.

In spite of the foregoing, I understand and acknowledge that my résumé for discussing such matters is slight. But MSNBC military analyst Jack Jacobs’ is not.

Jacobs won the Medal of Honor for his heroism in Vietnam. According to his Medal of Honor citation, Jacobs received the Medal “For conspicuous gallantry and intrepidity in action at the risk of his life above and beyond the call of duty.”

With his company under intense enemy fire and the command group having suffered heavy casualties, “Capt. Jacobs assumed command of the allied company, ordered a withdrawal from the exposed position and established a defensive perimeter. Despite profuse bleeding from head wounds which impaired his vision, Capt. Jacobs, with complete disregard for his safety, returned under intense fire to evacuate a seriously wounded advisor to the safety of a wooded area where he administered lifesaving first aid. He then returned through heavy automatic weapons fire to evacuate the wounded company commander. Capt. Jacobs made repeated trips across the fire-swept open rice paddies evacuating wounded and their weapons. On 3 separate occasions, Capt. Jacobs contacted and drove off Viet Cong squads who were searching for allied wounded and weapons, single-handedly killing 3 and wounding several others. His gallant actions and extraordinary heroism saved the lives of 1 U.S. advisor and 13 allied soldiers.”

I had the pleasure of meeting Captain Jacobs for a few minutes about a year ago. He’s a small man, and you don’t look at him and instantly think “war hero.” It’s precisely for this reason that his valor is so poignant. For a nation to be great and its military to be great, it needs ordinary men to do extraordinary things. It also needs ordinary men who are willing to make extraordinary sacrifices.

Jack Jacobs watched the English press conference where the soldiers’ Captain declared that “fighting back was simply not an option.” Like me, Jacobs was horrified. Because of his military experience, Jacobs was personally outraged as well.

Asked by an MSNBC hostess for his feelings about the released soldiers and their press conference, Jacobs inveighed on-air, “That was the most disgusting, disreputable, dishonorable performance I can remember in more than 40 years of my relationship with the military service. I think every man every woman, who wears the uniform or has ever worn the uniform of his country, no matter what country it is, ought to be disgusted by this…Words can’t express my disgust.”

To some, the returning British soldiers may be heroes. If we have so defined heroism down, woe be unto us all.