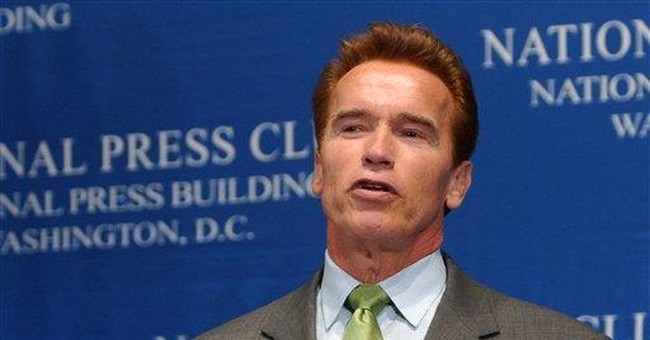 Are you ready for trans-partisan politics, a type of politics that transcends partisanship? Some of America’s leading politicians think you are. And really – after the last six years, why wouldn’t you be?

We saw a sign of things to come with Al Gore’s testimony before Congress this week. Actually, it was a rather seminal moment, and not because Gore’s endless prattling about methane, greenhouses and carbon footprints was remotely interesting.

In most of his past incarnations, Gore has been a rabidly partisan pit-bull. Remember, he is the man who pounded the podium repeatedly shrieking “How dare they!!!” before a Moveon.org convergence not too long ago.

Yet in his congressional appearance, Gore was the very picture of placid accommodation. When James Inhofe basically labeled him an ignorant, alarmist hypocrite, one would have expected Gore to lash back at Inhofe with his typical partisan fury. Instead, Gore suggested that the two of make a breakfast date so that they might seek out some common ground while munching on croissants.

It’s one thing for Al Gore to decide that partisanship is a loser. After all, one wouldn’t label something a trend just because the erstwhile veep is doing it. No one has ever accused Gore of being one of our canniest politicians.

But Arnold Schwarzenegger is a different matter. The Governator is a gifted politician, even if he has been a disappointment to many conservatives. So when Arnold takes trans-partisanship out for a spin, we best take notice.

According to the Politico’s Roger Simon, Schwarzenegger said some rather provocative things about the presidential contenders this week during a speech in California. “Don’t buy into their big lines,” Arnold warned. “They can’t just come and give us a résumé and a nice dance.” He continued by reminding his audience that every presidential candidate since Teddy Roosevelt had promised universal health care.

But Arnold was just getting warmed up: “They say: ‘Fight global warming.’ How? The United States is not even in the game right now when it comes to global warming. Do they believe in offshore oil drilling? I want to know that. They can’t escape that. They say: ‘On immigration, we should be firm but compassionate.’ What does that really mean? Does it mean we should build a border fence? Does it mean we should send millions of people back? And what if they have children who are citizens?”

Interestingly, throughout this litany, Schwarzenegger never bothered to distinguish between Republican and Democratic candidates. “A pox on all houses,” he seemed to be saying.

WHEN A SMART GUY LIKE ARNOLD AND A GUY LIKE GORE have reached precisely the same conclusion, it’s a sure sign that’s something up. While Americans always express frustration with their politicians, this time there seems to be level of anger not previously seen. Both the president and the congress have approval levels that are at historically speaking extremely low levels. The total partisanship that enthralls political junkies has reached a tipping point where it is actually beginning to disgust the broader American public that tries to ignore politics instead of following them obsessively through blogs.

For presidential politics, this means the time could be ripe for something and someone different, a figure who looms above the partisan fray. If this is the case, obviously it is dreadful news for Hillary Clinton who is a political lightning rod as well as a notoriously fierce partisan. If America’s looking for a fresh face, it’s not likely to be Hillary who has transformed herself into a sort of American Golda Meir. Minus the charm.

This is also bad news for John McCain. McCain has been around too long to credibly pose as an outsider and as someone who’s not of the system. For all his maverick posturing, he, like Hillary, has become a political warhorse.

The freshest face out there, the one who will seemingly be most credible when he offers a new kind of politics is Barack Obama. Obama seems to be aware of this basic appeal he has. He taps into the vein of discontent regarding the political system at virtually every public appearance. It’s also noteworthy that he dresses in a unique style. He wears a suit, but with no tie. For some reason, this looks fresher and bolder than Lamar Alexander’s ridiculous plaid shirt ever did.

SO WHO ON THE REPUBLICAN SIDE can rival Obama’s appeal? Fred Thompson, if he enters the race, will have a great deal of trans-partisan appeal. He just doesn’t seem like a politician, but he does seem like a leader. That, and the fact that he’s only been a politician for six years in a long and distinguished career will make him an opportune player at the trans-partisan game. Once he actually enters the rough and tumble of the competitive Republican field, though, remaining a trans-partisan figure will be a tough task.

The hill will be still steeper for Mitt Romney and Rudy Giuliani, but hopefully climbable. Although he’s been a celebrity for a while, Rudy’s celebrity (outside of New York City, anyway) sprang less from his doings as a politician than from his single day as a bona fide American hero.

The good news is that with the accelerated primary schedule, the presumptive Republican nominee will have nine months to make himself into a man who transcends ordinary politics. The bad news is that if Barack Obama is the Democratic nominee, he’ll need it.