The Left Still Doesn't Get It -- Even After KSM Confession 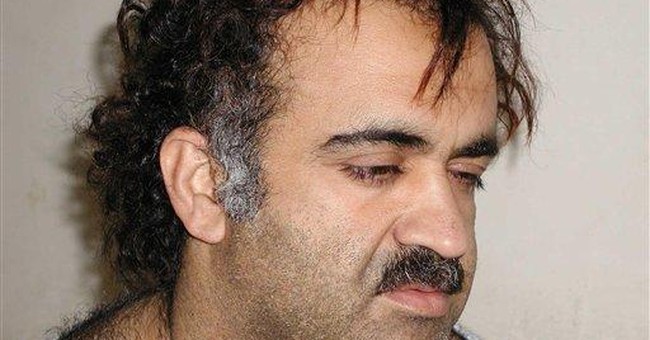 Last week, the American government released a statement from al Qaeda's one-time operational czar Khalid Sheikh Mohammed. Even allowing for an amount of potential blarney and outright fabrication, Mohammed's confession provided some unique and chilling reminders about the terrorist mind.

First and foremost, for al Qaeda and like-minded types around the world, Sept. 11 wasn't the culmination of a reign of terror but merely its intended beginning. Mohammed's plans were audacious and ambitious. According to the testimony he gave at Guantanomo, there was nary a prominent skyscraper in the United States that he didn't at some point plan to knock down. Past American presidents also received his unwanted attention. Mohammed boasted of plans to assassinate several former presidents including Presidents Carter and Clinton.

Most chilling were his words regarding Daniel Pearl of the Wall Street Journal. Mohammed crowed, "I decapitated with my blessed right hand the head of the America Jew Daniel Pearl." While some, including Pearl's father, have questioned the legitimacy of this boast, there is little doubt that Mohammed was deeply involved in Pearl's abduction and murder. Even if a fellow jihadist's "blessed right hand" actually did Pearl in, it should be beyond dispute that a man such as Mohammed who would brag about such a deed and had an unquestioned role in several mass murders is quite literally the face of evil.

The removal of Mohammed from the ranks of al Qaeda and his subsequent use as an American asset should be an occasion for joy for all stakeholders in the war on terror. This list of stakeholders is extensive, and includes everyone in a Western country who values their freedom. And yet, oddly, Mohammed's comments last week served as sort of a Rorschach test, revealing where several areas of our society mentally and emotionally place themselves.

The Daily Kos and its most rabid denizens, for instance, tend to view everything through their prism of Bush hatred. For them, Mohammed's confession amounted to nothing more than a disingenuous public relations stunt. In an attempt at satire, Kos diarist "Sargent Pepper" wrote, "Did you also know that he's taken responsibility for outing CIA covert agent Valerie Plame? He's also taken responsibility for firing the U.S. attorneys, faulty prewar intel on Iraq, turning Foley and Haggert into gay men, enticing Duke Cunningham into stealing millions [and] shooting Dick Cheney's lawyer buddy." He concluded his essay by asking, "What other atrocities can we suggest that he committed?"

Influential blogger Andrew Sullivan, for whom the subject of torture and prisoner mistreatment has long been an ongoing obsession, rued the fact that Mohammed can't be brought to trial in our criminal justice system because of the way Mohammed was handled at Gitmo. The fact that our criminal justice system, given its current state, wouldn't be able to effectively deliver justice in such a case without turning it into an undignified circus that would insult the memory of Mohammed's thousands of victims seems not to affect Sullivan. Rather, Mohammed's confession revealed where Sullivan's thinking remains — firmly and narrowly fixed on what he calls torture. So constrained is this worldview, all other concerns, both moral and pragmatic, can't possibly manage to wrestle their way into the picture.

Los Angeles Times writer Tim Rutten penned a column that reflected Sullivan's concern about a trial in our system of justice while celebrating his own moral vanity. "The confession set the pundit pack baying in full cry," wrote Rutten. "We've now had 72 hours of faux-Churchillian fulmination on 'evil' and 'monsters' and 'the clash of civilizations' and 'a new era' that makes no allowance for the old-fashioned niceties concerning human rights and due process."

Way out there on the loony left, Rosie O'Donnell perhaps outdid herself, expressing sympathy for Mohammed, defending his "humanity" and lamenting that he and other terrorists are "treated like animals." She then offered her own intelligence assessment of Mohammed's importance, saying, "But I just think, this man for whatever he did or didn't do, he is not the be all, end all of terrorism in America. And our government has not found the answer in this one way [unintelligible]."

Speaking on behalf of sensible people everywhere, the editors at National Review published a trenchant editorial on the subject of Mohammed that looks forward to Mohammed receiving the "swift and relentless justice" that he so obviously deserves. National Review concluded its editorial by noting, "Thousands are dead because of him. Thousands will die yet if we slacken in our resolve to defeat his comrades still plotting against us."

Amazingly, five scant years removed from Sept. 11, we have every reason to believe that not only are such sentiments not universal, they may in fact be held by only a minority of the country that not so long ago knew it was in a fight for its very survival.