The disgrace of Walter Reed is indefensible 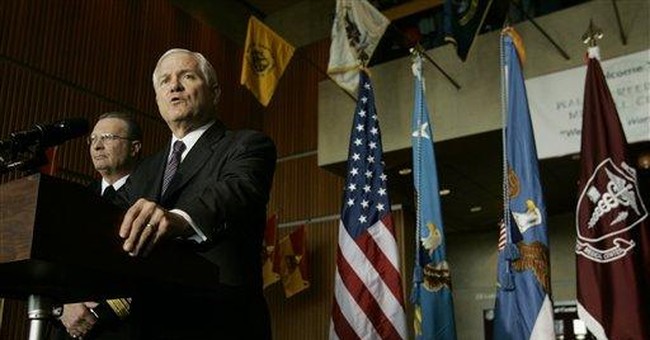 For conservatives, feeling besieged by the national media comes naturally.

Take Ann Coulter's little speech at CPAC last week where she called John Edwards a "faggot." After the incident, the national media pounced. Republicans were ordered to renounce Coulter, something the top tier of presidential candidates quickly (and rightly) did.

Simultaneously, many conservatives instinctively circled the wagons around the gránde dame of conservative shock "humor." They whined about how unfair it is that Bill Maher can offer assorted televised idiocies each week to an indifferent nation, but let Ann Coulter say one little slur and it becomes every talking head's favorite controversy du jour. Distrustful of a national media that they think is out to get them, many conservatives supported Coulter during her hour of self-induced crisis. The underlying matter of whether or not she deserved their support (she didn't) failed to penetrate the thinking of these fiercely tribal people.

The revelations regarding the conditions at Walter Reed Hospital are of course a story of an entirely different magnitude. Nonetheless, the thought of Henry Waxman brandishing subpoenas while The New York Times writes partisan editorials might make a lot of Republicans reflexively circle the wagons around the once again besieged Bush administration.

This is an urge that Republicans and conservatives should suppress. What happened at Walter Reed is a national disgrace, and leaves an unerasable blemish on the Bush administration. To pretend otherwise would do a disservice to our returning soldiers who have suffered at Walter Reed. The disgrace of Walter Reed is indefensible; a significant conservative or Republican movement to defend it will beg the inference that the conservatives doing so have sold their souls for partisanship.

The Walter Reed General Hospital opened for business in 1909, named for Maj. Walter Reed, who discovered that mosquitoes transmitted yellow fever. In 1977, the modern incarnation of the Walter Reed Medical Center came into being. The hospital has 5,500 patient rooms and is built around a network of courtyards. Every patient room has a view of the outside.

Walter Reed has long been the flagship of U.S. military hospitals. That's why the revelations of the last couple of weeks have been so astonishing. Some of the physical conditions in the facility were disgraceful. In building 18, the epicenter of the scandal, 80 recovering soldiers had to endure soiled rugs and moldy rooms. When the workers finally arrived last week to clean things up, they had to wear protective masks.

And then there were the bureaucratic nightmares. Stories of veterans being treated with callousness, neglect and incompetence are as numerous as they are infuriating. Soldiers who sought additional treatments could get neither timely nor appropriate responses from the facility's dysfunctional operators. In short, our warriors who served our country so nobly were treated in an unforgivably shabby manner.

It is to Secretary of Defense Robert Gates' credit that he has acted so quickly, efficiently and, yes, ruthlessly to set things right at Walter Reed. Gates' course has been a wise one. His firings have been more than symbolic. Both the general in charge of Walter Reed and the secretary of the Army have tendered their resignations. This is a welcome indication that, at least as far as this matter is concerned, "accountability" won't be limited just to the lowest member of the hierarchy that it can be plausibly pinned on.

Even wiser has been Gates' insistence that Walter Reed become an open shop for members of Congress. Without limitations, congressmen and senators can make their own investigations of what went wrong there. While many members of congress from both sides of the aisle will probably use this as an opening for a particularly tasteless photo-op while they deliver a prefab speech of righteous indignations, Gates still has done the right thing. In every sense of the term, Walter Reed had become a fetid mess. If ever a crisis needed the disinfectant that sunshine provides, it's the present one at Walter Reed.

As far as the Bush administration is concerned, longtime supporters (like myself) can only be shaking their heads in dismay and disgust over this scandal unless they've instead opted to man the partisan barricades. Taking care of our veterans, especially at a time of war, should have been a top priority. Being the flagship of all military hospitals, one would have thought that Walter Reed was providing outstanding service.

As has been the case too often with the Bush administration, we can only wonder how this has happened. Surely taking care of our veterans and recently returning soldiers was a priority for the administration. But if those were ranking priorities, how could the administration have done such a wretched job of tending to them?

Neither scenario puts the administration in a positive light.