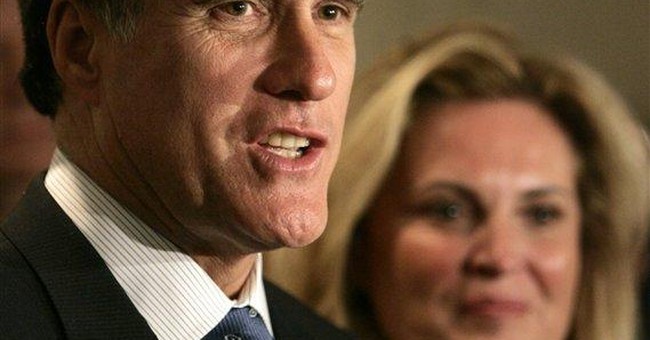 The mainstream media’s fascination with Mitt Romney is rather odd. After all, Romney is still a second tier presidential contender who has but a fraction of the name recognition of more famous politicians like John McCain, Rudy Giuliani, Hilary Clinton and Barack Obama. And yet the press’ ranking obsession as far as the presidential race is concerned has been to relentlessly peddle a narrative that Mitt Romney is an unprincipled flip-flopper.

Why has Romney received so much of the media’s peculiar brand of tender loving care? After all, while New York’s former mayor did deservingly become a national hero after his courageous response to the 9/11 attacks, the Rudy Giuliani Story has many juicy nuggets that are not widely known to the public outside the five boroughs. And yet the national media to date seems curiously uninterested in such matters.

On the other side of the aisle, Hilary Clinton has been unable to square her varying positions regarding the war in Iraq. Unlike Romney on the social issues, her “evolution” on the key issue of the day remains a work in progress. If the press wanted to check out the former first lady’s present-day gyrations, it could breathlessly describe a flip-flop as it emerges from its cocoon.

And then there’s Barack Obama. If ever a political candidate seemed worthy of getting the investigative juices of the media flowing, Obama would be the guy. He has emerged as a top tier presidential contender after a mere two years as a national figure. What’s more, his tenure in the Senate has been uneventful. He has authored no significant pieces of legislation nor has he delivered any speeches of note since his keynote address at 2004’s Democratic National Convention. You’d think the question of who Barack Obama is beyond the glittering image would be a matter of some interest. But it isn’t for the press.

To date, only Mitt Romney has received the scrutiny of the national media. Again, why?

TO START WITH THE OBVIOUS, MITT ROMNEY IS THE most conservative candidate in the field who has, at present, a chance of winning. The press doesn’t like conservatives, or at the very least, is more hostile to conservatives than it is to liberals. The press sees everything regarding a conservative in the worst possible light; liberals are more likely to get the benefit of the doubt.

A second reason is that Mitt Romney doesn’t look like a politician should, or at least the way the media thinks a Republican politician should. Given that Romney is constantly praised for his patrician demeanor, his impeccable manner and his smooth-as-silk politicking, I know this point is counter-intuitive, but bear with me.

The press has come to expect Republicans to fit certain molds. They are supposed to be inarticulate and not quick on their feet. The press has stereotyped every Republican presidential nominee since Ford in this way. They are also supposed to be intellectually unimaginative or downright unintelligent. Again, every Republican presidential nominee since Ford has had to live with this label. They are further required to be creatures of politics who have accomplished nothing or next to nothing outside of the political world. Lastly, all Republicans ought to have a bit of Elmer Gantry in them. They should preach about morality and piety, but they should always be obliging enough to have at least a few skeletons jangling in their closet.

Mitt Romney fails to live up to any of these stereotypes. Glib and articulate, it’s hard to imagine Romney ever fearing a press conference or a debate. Intellectually, Romney graduated Harvard’s Business and Law Schools with top honors. Furthermore, it seems like he’s completely unfamiliar with the media dictates that Republicans should wrestle with English like it’s a hostile foreign language and make themselves available for lampooning as dullards.

Even more gratingly, Mitt Romney didn’t become a full-time politician until 2002. Until then, he had been a phenomenally successful businessman who had made hundreds of millions of dollars in a fiercely competitive industry while earning a reputation for honesty and intellectual probity.

Lastly, and probably most frustratingly for the media, the Romney closet is depressingly barren. When Mitt Romney talks about family values, he’s able to point to his own wife of 40 years and a brood of children and grandchildren that seems too good even for a Christmas card.

In short, Mitt Romney is more formidable than a Republican presidential candidate has any right being. He is a fat target in a way that a guy like Mike Huckabee never could be, even if Huckabee hadn’t lost all that weight.

NONE OF WHICH IS TO SAY THE PRESS’ ATTACKS are entirely without merit. Romney’s positions on social issues, most prominently abortion, have changed (or evolved) in recent years. The press has concluded with predictable hostility that these changes reflect an unappealing opportunistic streak that marks Romney’s character. Because these changes have become such an issue, Romney will have to offer a more compelling explanation for his current positions than he has to date. The fact on the ground, fair or not, is that some observers have decided that Mitt Romney’s core convictions don’t run deep. The candidate and his campaign will have to deal with this matter.

But as far as the press is concerned, one question determinedly lingers: To paraphrase Bob Dole, where was the similar outrage when Al Gore and Dick Gephardt had similar evolutions, albeit ones that ran in the opposite direction?