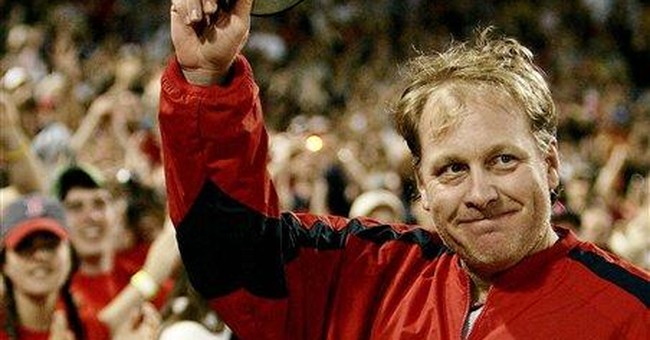 On July 25, 2004, the Red Sox and Yankees tussled at Boston’s historic Fenway Park. The then-presumptive Democratic nominee for President was Massachusetts’ own John Kerry. On the campaign trail, Kerry had routinely professed to be a die-hard Sox fan, even though in an interview a month earlier he named as his all time favorite Sox player a man who never actually played for the Red Sox. In order to demonstrate his Ordinary Joe bona fides to a watchful and suspicious nation, Kerry made a splashy show of attending that evening’s game.

To celebrate Kerry’s rare mingling with the hoi polloi, Kerry’s handlers cooked up a typically misguided plan in which Kerry would toss out the ceremonial first pitch while an Army veteran who had just returned from tours in Afghanistan and Iraq served as his personal catcher. In so doing, Kerry would bask in the affection of his local fan base as well as honor America’s military.

The plan quickly went awry. Much to Team Kerry’s surprise, the putative local hero was greeted by more boos than cheers by the Fenway faithful. When the time came to toss the first pitch, Kerry embarrassed himself by weakly heaving up an anemic lob that barely made it two thirds of the way to the military man awaiting Kerry’s throw. As if all this weren’t bad enough, Kerry blamed his pathetic pitch on his catcher, the just-returned Iraq veteran. Kerry asserted, “I held back. He was very nervous. I tried to lob it gently.”

JOHN KERRY IS NOT POPULAR IN MASSACHUSETTS. Take it from a native – he never has been. We have a familiarity with him that the rest of the nation lacks. That familiarity has bred contempt. The above anecdote, from the boos that greeted him at Fenway Park to his churlish response to his own womanish throw illustrates both the fact that we don’t like him and why we don’t like him.

Perhaps you prefer your data in a harder form. If so, there’s this: John Kerry got a lower percentage of the presidential vote in Massachusetts than Al Gore did four years ago. What’s more, Kerry didn’t have Ralph Nader siphoning away votes from him the way Gore did. And if you think Kerry’s performance lagged behind Gore’s because Bay State residents had developed a fondness for President Bush and his Texas swagger during his four years in office, think again. The only explanation for Kerry’s poor performance in ’04 compared to Gore’s in his home state is because those who know Kerry best like him least.

Kerry is up for reelection in ’08. While the rest of the country has rolled its eyes over his post-presidential defeat behavior of botched jokes and photo-ops with Iranian leaders, the Massachusetts electorate has simmered. Ideologically, Kerry is in line with the Commonwealth’s voters, but we don’t like losers. We especially don’t like losers who disgrace our region by performing in an embarrassing fashion. After his presidential loss in 1988, then-Massachusetts Governor Michael Dukakis had the good sense to not seek reelection in 1990. It was just as well; after the way he had brought shame to the state while seeking national office, he couldn’t have been elected dog-catcher let alone governor.

ON THE OTHER HAND, MASSACHUSETTS LOVES WINNERS. And this is where Kerry might have a serious problem. Red Sox star pitcher and local legend Curt Schilling is reportedly pondering a run against Kerry in 2008.

While Kerry was disgracing himself and the region by falling to ignominious defeat in the Fall of 2004, Schilling was forever carving himself into the heart of the state’s passionate baseball fans. Especially noteworthy was Schilling’s effort in Game 6 against the Yankees that Fall, the famous Bloody Sock Game. With the Red Sox attempting to stave off elimination for the third straight game, Schilling took the mound with a badly injured heel. He risked his career pitching that night.

And he pitched magnificently. With blood seeping from his injured heel through his white sock, a wounded Schilling held the Yankees at bay. It was one of the gutsiest performances in sports history, and it made the Red Sox historic World Series triumph a couple of weeks later possible. What’s more, Schilling didn’t blame any errant pitches that evening on his catcher. He didn’t make any excuses – he just performed.

During his time with the Red Sox, Schilling has distinguished himself not only as an outstanding pitcher but also as an unusually outspoken and intelligent athlete. He has also shown an appetite for politics. After the Sox won the World Series in ’04, several members of the Red Sox front office brass including 30 year-old General Manager Theo Epstein endorsed John Kerry’s campaign. By way of public rebuttal, Schilling quickly endorsed George W. Bush. The contrast between endorsers was one that the Bush campaign probably didn’t mind. Kerry could have the effete, scrawny 30 year-old Yale grad who had never even played high school ball. Bush would take the courageous hero who defied injury to lift the Curse of the Bambino.

IF SCHILLING WERE TO DECIDE to run against John Kerry, Kerry would have one big advantage. Kerry’s a Democrat, and Schilling would be running as a Republican. Republicans are about as popular in Massachusetts as the Yankees. But Schilling could well transcend conventional party affiliations. The “R” that would come after his name on the ballot may well come to stand for “Red Sox” instead of “Republican.”

And then there’s the issue of Kerry. A lot of Bay Staters would vote for any viable candidate who ran against Kerry. If Kerry’s reelection becomes a referendum on his constituents’ feelings towards him, the incumbent will be in serious trouble.

Could Schilling pull off an upset against Kerry? Ask the Yankees – don’t bet against him.