The Yogi the Bear candidate 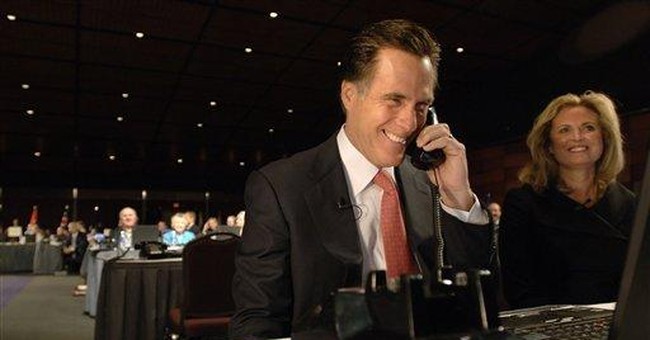 If there’s a “product” screaming out for someone to invent a better mousetrap, it’s the political fundraiser. Leave it to Mitt Romney, the “Smarter than the Average Bear” candidate, to do exactly that.

Prior to this week’s Romney kickoff event, the typical big-time political fundraiser jammed about 1,000 fat cats into an enormous hotel ballroom. Each donor paid over $1,000 a head for the privilege of eating rubber chicken and hearing a canned speech from their candidate of choice. Predictably, no one much cared for the ritual. The fat cats dreaded these events like jury duty; seldom would you hear a satisfied donor exclaim, “This is the most wonderful treatment of mass-produced chicken breast I’ve ever eaten. And the candidate’s rhetoric was inspiring. That was worth every penny!”

In truth, the attendees of such events would generally prefer to just write a check and forego the entrée and the rhetoric. Alas, that isn’t an option. The media only reports on “events,” so the donors’ have to attend in order to make it an “event.” (Helpful hint: If for some bizarre reason you want to attend one of these things but lack the funds, volunteer for a campaign. Soon the campaign will tap you to attend an event just to fill the room. When you’re enjoying your piece of free rubber chicken, be mindful to offer a word of thanks to me for making it all possible.)

BUT ALL OF THIS WAS BEFORE the Romney Presidential campaign showed the political world a better way. At his 2008 kickoff event held this past Monday, Romney made the fat-cats work for their metaphorical supper. (Much to everyone’s relief, no rubber chicken was served.)

Team Romney gathered approximately 450 of his most devoted and influential supporters. Among those attending were E-Bay CEO Meg Whitman and former Massachusetts Governor Bill Weld. The idea, according to Spencer Zwick, Romney’s fundraising chairman, “was to get Romney supporters to reach into their personal rolodexes” and try to enlist their friends in the Romney campaign. When you have supporters like the CEO of EBay, it stands to reason that their Rolodexes are potentially precious resources.

At the kickoff event, the Romney campaign systematically arranged for the campaign’s supporters to tap these resources. Each attendee, rather than being forced to consume a piece of cardboard masquerading as a chicken breast, was asked to dial for dollars on behalf of the Romney campaign. To support these efforts, the Romney campaign supplied the well-heeled volunteers with software from Salesforce.com, the unquestioned industry leader in contact and lead management tools. The campaign also provided its newly deputized fundraisers with an online library of Romney position papers and video clips that might be useful in closing a potential “sale.” Each supporter-turned-fundraiser was free to uses these tools as they saw fit. As Glenn Reynolds might put it, the Romney campaign unleashed a well-coordinated and well-connected “Army of Davids” into the realm of political fund-raising.

So how did it work? By the end of the day on Monday, the campaign had raised over $6.5 million thanks to the efforts of the volunteers and the richness of their Rolodexes. By comparison, Rudy Giuliani’s kickoff event raised the relatively puny sum of $800,000. According to Eric Ferhnstrom, Romney’s campaign spokesman, no less an authority than the New York Times’ Adam Nagourney attended Romney’s event and declared that he had never seen anything like it. As an additional point of interest, the effort that began on Monday did not end on Monday. The Rolodexes that opened that day did not snap close at sundown.

SO WHAT SHOULD THE POLITICAL OBSESSIVE who is already paying close attention to the 2008 campaign make of this? For one thing, it’s not just about the money, although as fundraising chairman Zwick said in our interview, “Money always talks, but early money screams.” We’ve gotten a glimpse at how the Romney campaign will do things, and it’s a vision that can’t comfort his rivals.

Mitt Romney made his business career first as a consultant and then as the king of the private equities field by figuring out how existing businesses could improve their operations. His success in repeatedly building better mousetraps is evidenced by a massive personal fortune. Unlike most of our wealthy politicians who sit on personal fortunes via the old fashioned ways of either inheriting or marrying their money, Romney actually earned his.

It is only natural for Romney that in politics he will continue to seek a better way. And make no mistake, the business of politics is sclerotic and irrational. Someone who’s serious about seeking innovation in the political field will find some seriously fertile terrain available.

The preceding hints at one of the things that has to have the Romney people smiling: The bar has been set very low. You’re talking about a truly backwards field of endeavor when “networking” constitutes a radical new technique. Also, any salesman reading this piece probably groaned when he saw the use of a product from Salesforce.com labeled as a bold and novel step forward. Salesforce.com’s products haven’t exactly been flying beneath American industry’s radar; their contact management tools are the norm in the sales world. And yet, you put these simple things together and you create something that strikes a ranking New York Times reporter as like nothing he’s ever seen.

For its part, Team Romney is modest about its accomplishments. Fehrnstrom and Zwick refused to speculate about any future fundraising efforts and they declined my repeated entreaties to talk trash about how much more successful their program has been than those of their chief rivals.

The only remaining question is how Mitt Romney will feel about my repeated likening of him to the endearing cartoon character, Yogi the Bear. I got to know Romney pretty well when I volunteered for him on his ’94 Senate campaign; the Yogi the Bear comparison definitely shortchanges him in the gravitas department.

But in the political world, as he was in the business world, Mitt Romney is most definitely smarter than the average bear. While it’s conceivable that Romney’s rivals may be able to close the ground in the fundraising game, the Yogi factor will be Romney’s consistent advantage.

Disclosure: Dean Barnett volunteered for Mitt Romney’s 1994 Senate campaign. If Team Romney will take him, he will also volunteer for Romney’s run for president.