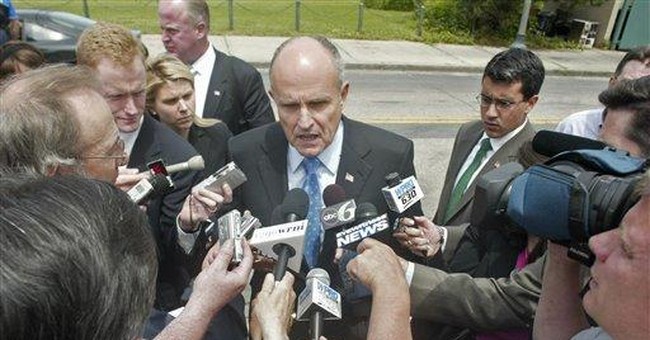 We are conservatives who are proud to support Rudy Giuliani for president. We support Rudy because he is a strong leader -- a man of action and a man of his word. And a big part of that is his proven effectiveness -- his record of actually changing things for the better in concrete, measurable ways.

A perfect example of his leadership and proven effectiveness is Rudy's record on adoption.

Rudy Giuliani dramatically increased the number of adoptions in the New York City system as mayor. Adoptions skyrocketed 133% over his eight year tenure compared to the eight years before he took office. It was a clear priority of his administration, beginning with the establishment of the Administration for Children's Services, the first child protection agency in New York City history that reported directly to the mayor. He streamlined the adoption process, slashing red tape and promoting adoptions through innovative initiatives such as "Adoption Saturdays" where family courts held special sessions dedicated to matching children with loving homes.

We are badly in need of such leadership as a nation today. It shouldn't be easier to fly around the world to adopt a child in China than it is to adopt a child in your own hometown. Rudy is committed to this as a national priority. If he is able to match the increases he achieved as Mayor, as many as 125,000 additional children would be adopted. That's a more hopeful, family-oriented America.

Now this doesn't erase important differences with Rudy on abortion. And this doesn't remove that issue as one social conservatives deeply care about. But Rudy's adoption agenda is an effective, concrete method to promote positive values we share.

Rudy promoted a culture of personal responsibility as Mayor of New York. Under Rudy's watch, abortions decreased by 16.8% in New York City. That outpaced the nationwide decline by 30%. If Rudy achieves a similar reduction in the number of abortions as President -- a goal he has stated publicly -- it would amount to about 200,000 fewer abortions in the United States during his time in the White House.

We also have confidence in Rudy's commitment to appoint strict constructionist judges who will interpret the Constitution, not legislate from the bench. Rudy Giuliani spent most of his career in law enforcement. He was a leader in Ronald Reagan's Justice Department. As President, he will work to continue the Reagan Revolution by appointing judges like Chief Justice Roberts and Justices Scalia, Thomas, and Alito. We believe he would appoint the best judges of any of the major candidates and obviously, judges fundamentally different than those Hillary Clinton or any of the other Democrats would appoint as President.

The bottom line is that Rudy Giuliani can win the Republican nomination and then win the general election. (Which other Republican can put blue states like California, New York and New Jersey in play.) He shares our strong commitment to winning the war on terror, promoting bold conservative fiscal policy, and appointing strict constructionist judges. And he’s proven his effectiveness in promoting positive values we all share by achieving real results.

He'll do all of this as President. And that's sure worth working and voting for.