David Vitter
David Vitter is dedicated to making life better for his young family and all Louisiana families. He’s focused on putting Louisiana first as an independent and outspoken reformer, and on advancing mainstream conservative principles.

In the Senate, David serves on the Committees on Commerce, Science and Transportation; Environment and Public Works; and Small Business and Entrepreneurship. Working on these committees allows David to focus on jobs, infrastructure, and economic development for every region of the state. He’s been particularly focused on lowering prescription drug prices, saving our coast, and preserving and improving Social Security for future generations.

Prior to his service in the U.S. Senate, David represented the First Congressional District of Louisiana from 1999 - 2004. During that tenure, he authored and passed legislation establishing a prescription drug program for military retirees, advancing missile defense, and cleaning up Lake Pontchartrain.

For his work in Congress, David has received numerous awards from leading organizations such as Americans for Tax Reform, the 60 + Association, and the Family Research Council.

David and his wife Wendy live in Metairie with their four children, ages 13 and under, and are lectors at St. Francis Xavier Church.

Theodore B. Olson
Theodore B. Olson is a partner in Gibson, Dunn & Crutcher's Washington, D.C. office; a member of the firm's Executive Committee, Co-Chair of the Appellate and Constitutional Law Group and the firm's Crisis Management Team.

Mr. Olson was Solicitor General of the United States during the period 2001-2004. From 1981-1984 he was Assistant Attorney General in charge of the Office of Legal Counsel in the U.S. Department of Justice. Except for those two intervals, he has been a lawyer with Gibson, Dunn & Crutcher in Los Angeles and Washington, D.C. since 1965. He is a member of the President’s Privacy and Civil Liberties Oversight Board.

Mr. Olson is one of the nation's premier appellate and United States Supreme Court advocates. He has argued 46 cases in the Supreme Court, including Bush v. Palm Beach County Canvassing Board and Bush v. Gore, stemming from the 2000 presidential election; prevailing in 75% of those arguments. Mr. Olson's practice is concentrated on appellate and constitutional law, federal legislation, media and commercial disputes, and assisting clients with strategies for the containment, management and resolution of major legal crises occurring at the federal/state, criminal/civil and domestic/international levels. He has handled cases at all levels of state and federal court systems throughout the United States, and in international tribunals.

As Solicitor General, during the presidency of George W. Bush, Mr. Olson was the Government's principal advocate in the United States Supreme Court, responsible for supervising and coordinating all appellate litigation of the United States, and a legal adviser to the President and the Attorney General. As Assistant Attorney General for the Office of Legal Counsel during the Reagan Administration, Mr. Olson was the Executive Branch's principal legal adviser, rendering legal guidance to the President and to the heads of the Executive Branch departments on a wide range of constitutional and federal statutory questions, and assisting in formulating and articulating the Executive Branch's position on constitutional issues.

Mr. Olson has served as private counsel to two Presidents, Ronald W. Reagan and George W. Bush, in addition to serving those two Presidents in high-level positions in the Department of Justice. He has twice received the United States Department of Justice's Edmund J. Randolph Award, named for the first Attorney General, its highest award for public service and leadership. He has also been awarded the Department of Defense's highest civilian award for his advocacy in the courts of the United States, including the Supreme Court, on behalf of that Department.

Mr. Olson is a Fellow of both the American College of Trial Lawyers and the American Academy of Appellate Lawyers. The National Law Journal has repeatedly listed him as one of America's Most Influential Lawyers. The American Lawyer, Legal Times and Washingtonian have each characterized him as one of America's leading advocates. The New York Times columnist William Safire described Mr. Olson as this generation's "most persuasive advocate" before the Supreme Court and "the most effective Solicitor General" in decades.

Mr. Olson received his law degree in 1965 from the University of California at Berkeley (Boalt Hall) where he was a member of the California Law Review and Order of the Coif. He received his bachelor's degree from the University of the Pacific, where he was recognized as the outstanding graduating student in both forensics and journalism. Mr. Olson has written and lectured extensively on appellate advocacy, oral communication in the courtroom, civil justice reform, punitive damages, and constitutional and administrative law. 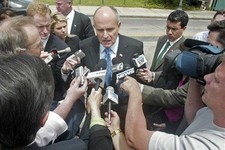