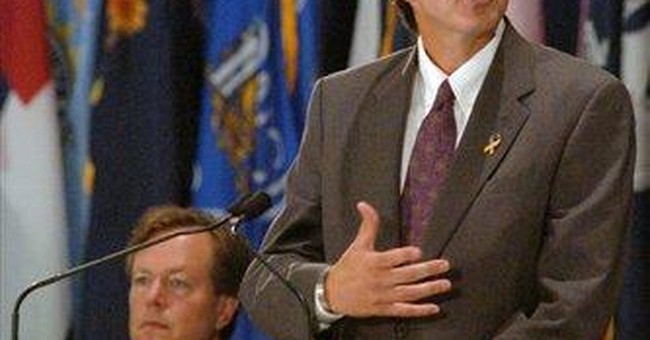 Is Governor Tim Pawlenty looking to get a Nobel Peace Prize by following in the wake of Al Gore?

Newsflash Governor Pawlenty: Lake Superior was formed by the melting of a massive glacier about 10,000 years ago, and the last glaciers retreated from Minnesota about 9000 years ago. Global warming started about 15,000 years ago, and without it Minnesota would be a vast desert covered in a mile thick layer of ice.

The effect of global warming on Minnesota is pretty obvious: without it there would be no Minnesota to govern.

In some ways, it makes sense for Pawlenty to visit the arctic, if he were to take away the real lesson offered there: without the global warming that has occurred over the last 15,000 years, Minnesota and much of the Northern Hemisphere would be as barren of life as the arctic is today.

But of course, that is not his intent. Instead, Pawlenty seems inclined to jump on the climate change bandwagon while it can still help his political career. Known as a strong fiscal conservative in a state with a liberal bent, he appears to be doing nothing more than burnishing his credentials for those seeking a “moderate.”

It would be a matter of little consequence if Governor Pawlenty were just another Midwest Governor seeking the limelight and the approval of the chattering classes, but he is not. As Chair of the National Governor’s association Pawlenty wields considerable power over the agenda of that organization.

Contrary to the scaremongering being pushed by the media today, few credible scientists would stake their careers, no less the world economy, on predictions of disasters due to human-induced climate change. In fact, there is a long list of credible scientists who have staked their careers and reputations on questioning climate change, and their stories can be found in a wonderful series written by Lawrence Sullivan of the Canada Post. Climate change skeptics include even Al Gore’s mentor, Dr. Roger Revelle. When Revelle disagreed with Gore, Gore insisted that he was senile.

Why do these scientists go out on a limb when it would be easier to go along to get along? Just about every testable prediction that climate scaremongers have made has turned out to be false.

Take the current hurricane season, or for that matter last year’s. Both were predicted by the Climate scaremongers to be among the worst in human history, but instead they have been among the quietest.

Contrary to their predictions, Polar Bear populations have been steady or increasing, and are so populous that hunting them is legal.

And most importantly, contrary to their predictions, human life spans are increasing and by any measure human well-being is at its all-time high in human history. In fact, if one were to plot average global temperatures along with human well-being, there is pretty much a one-to-one correlation between a warmer earth and better standards of living and human population growth.

Unfortunately, for politicians the facts are entirely beside the point, because studying the facts would get in the way of those trying to grasp enormous amounts of money and power at the expense of the average citizen.

Governor Pawlenty’s trip to the Arctic this spring is a purely symbolic move. Climate science will not be advanced one iota. If anything, his trip will further the propaganda of those with everything to gain and nothing to lose if their “science” proves faulty.

But it will also, he calculates, advance his political career. Just as the Climate Scare has advanced the careers of Al Gore, the scientists who are enjoying a 10-fold increase in government spending on climate research, and the phony “carbon trading” schemers who are making out like bandits while the rest of us fork over our freedoms to them.

The question Governor Pawlenty should be asking is this: what would the effect on human population of reducing carbon emissions by 80%? In a state with a climate that mirrors Siberia, I would suggest that the consequences would be very grave indeed. Millions of Minnesotans freezing in the dark, unable to travel because their cars have no gasoline, and unable to heat their homes because natural gas and electricity production are far from carbon neutral does not look like a good future to most Minnesotans.

So let me suggest a better trip for Governor Pawlenty than the one to the Arctic this spring: try living a Minnesota winter without the power and heat sources that emit carbon dioxide. Try eating only locally produced food in the middle of Winter. Avoid using the State car and walk to the Capitol some morning when it is 30 below zero outside.

Because that is what life would be like if the policies he is proposing truly were enforced.

Something tells me that asking Minnesotans to truly make those sacrifices might not enhance Pawlenty’s political career quite so much as he thinks.