Politics and the Precariousness of Reality 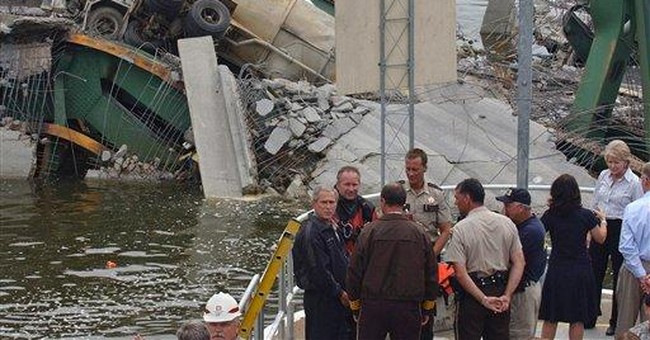 It was just over two weeks ago that Minnesota experienced what many politicians here declared was one of the greatest tragedies the State had ever seen—the collapse of the I-35W bridge in the heart of Minneapolis.

It was only a few days after that the finger pointing and political blame game started in earnest—along with some rather ill-considered partisan political attacks on the current Minnesota Governor Tim Pawlenty, blaming him for the collapse and allowing the state’s infrastructure to deteriorate under his watch. The hyperbole started early, and it has yet to subside.

The attacks were nasty, but not based in facts. Over the last decade Minnesota’s budget for road construction has increased by slightly over 100%, and much of the Federal money coming to Minnesota has been diverted to massively expensive and underutilized transit projects and projects in the sparsely populated Northeast corner of the State, represented by Congressman Jim Oberstar, now chair and formerly ranking member of the House committee responsible for transportation funding.

In some ways, a more disturbing fact has come to light in the debate over the bridge collapse—and one that has implications far beyond partisan and parochial Minnesota politics.

There is a growing idea that Government can shield us from all ills, regardless of their source, as long as enough resources are poured into bureaucracies dedicated to shielding us from the contingencies of daily life. If we only pay enough in taxes, life can be safe.

Reality proves this thesis as not just wrong, but pernicious.

Two weeks after the bridge collapse here in Minnesota, another, much larger-scale tragedy has struck a wide swath of Minnesota. A series of flash floods tore through the State as up to 18 inches of rain was dumped on drought-parched soil baked by a mostly rainless summer. The collapse of the bridge was dramatic and telegenic, but the more common ravages of nature put the bridge collapse into a different perspective.

The scale of the current natural disaster is huge. Roads were washed away, hundreds or perhaps thousands of people are currently left homeless by the storms, and the Governor toured the area with local officials and met with local residents to help them cope with the disaster . President Bush will be here on a visit soon to a newly ravaged State, and will make another statement about how the Federal government will help rebuild the flooded areas.

On the one hand, it’s a blessing that here in America we can marshal the resources of an entire nation to help each other rebuild after such tragedies, but on the other, there is something vaguely disturbing about the whole political spectacle unfolding.

Some residents were quoted in the local paper complaining about FEMA 's response —it had been only been a couple days since the summer storm roared through the State, and yet there are already complaints that the response has not been fast enough. Undoubtedly the local and national media will use this as yet another example of how underfunded government is.

With the Katrina disaster, the fact was that New Orleans was a city built in a Hurricane-prone area, built below sea level, and someday a disaster was bound to strike someday. Many of the preparations for that disaster were made decades ago, and they were never going to be adequate to the task should the disaster strike, as it did in 2005. Yet it became fodder for political finger pointing within days.

In some ways the Minnesota bridge collapse bears the same hallmarks: the bridge was built decades ago, with a design that would never pass muster today. Extremely competent engineers made the choices that seemed best to maintain safety, were spending millions to upgrade the bridge, and yet an unexpected failure occurred. Nobody yet knows why, whatever speculation gets published in the papers every day. People of good will were doing their best, and spending millions of dollars, to keep the bridge safe.

And the floods that left so many homeless here in Minnesota—along with at least 6 fatalities—were simply an act of nature that occurs here frequently. Tornados and violent storms are the norm, not the exception in the wide plains and prairies of Minnesota and much of the United States, as Hurricanes are for the Eastern seaboard.

The new and bizarre assumption—that government should or could be Omni-competent in preventing or insuring against the risks of life is disturbing. It is right to ask that government do its best to provide public safety, ensure public health, and build and keep up the infrastructure it is responsible for. But it simply cannot ensure that nothing will ever go wrong, or be able to fix whatever bad things happen within days.

Government is not a benevolent mommy or daddy which can make everything better when it hurts. It is an imperfect tool we use to ensure, as the Founders put it, that we can all participate in the pursuit of “life, liberty, and happiness.” We ask it to provide public goods, but the tools it has—bureaucracies and money—will never do a great job providing what we are asking it to do.

No amount of money, no number of great and powerful bureaucracies, and no amount of planning will be able to thwart the ability of nature and fortune to overcome our best laid plans and preparations. And it will certainly never be able to eradicate the risks of living in a chaotic and sometimes violent world.

Yet despite this fact, I expect that soon enough the act of Nature that created the flash floods that have left hundreds or thousands homeless will be used to assign blame, and as another tool in the unending battle for political power.

As long as some people believe that government can solve any problem with enough money, every tragedy, act of Nature, or error in judgment made recently or decades ago will be turned into political fodder within days, or even hours.