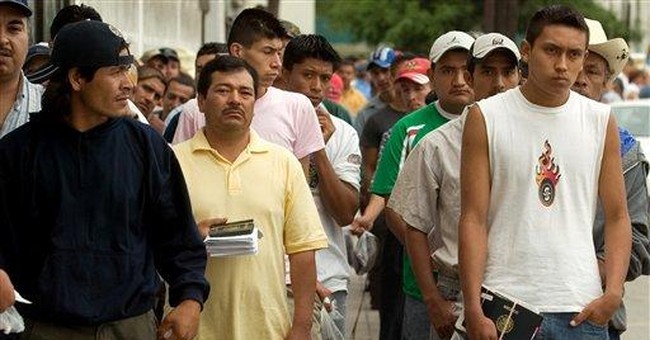 Economic debates are dominated by stupid misconceptions, so it is difficult to pick one as the most pernicious of them all.

But if anyone is up to this difficult task, it must be me.

One error; one misconception; one outright falsehood is at the root of so many economic myths that I think it should take the prize as the most damaging: that there is only so much “work” in the world, and therefore only so many “good jobs at good wages” to go around.

Opposition to free trade is often based upon this fallacy: if we open our markets to cheaper foreign goods, somehow Americans will be less well off because we are exporting jobs that could be done here by higher-wage American workers.

New technologies are often feared for the same reason. Robots will replace human workers, and newer, more efficient technologies will eliminate the need for millions of lower-skilled jobs across the land.

Immigrant labor takes the same hit (I speak now of immigrants, not illegal immigration, which is a law-enforcement issue); if a “wave of immigrants” floods the United States, millions of native-born Americans will lose their jobs to cheaper and harder working foreigners.

The root of all these myths is infantile economic thinking.

Simply put, economic activity is the exchange of goods and services between willing people who expect to be made better off through their exchanges. As long as the information is good and fraud is not involved, the more exchanges, the better.

Trade creates a virtuous circle. Wealth, in fact, is created. ,p> It is through trade that we get the division of labor. None of us wind up farming our own food, making our own clothes, or milking the cow for our coffee cream just because nobody else will.

As long as human beings have desires that need to be filled, and others have the skills, the goods, or the wherewithal to fulfill them, there will be “jobs” and “work” aplenty. And recent history suggests that the expansiveness of human desires and the need for ever more “stuff” and ever more productive workers shows no sign of diminishing.

Just the opposite, in fact.

Things that barely existed 20 years ago became universal desires 10 years ago and have graduated into the realm of “can’t live without” products. The cell phone fits the bill for such an item. Internet access is there. Flat screen TVs as some sort of universal information appliance are getting there. Who knows what else is on the horizon—or for that matter how long we will live to see these wonders because trade has allowed people to specialize in medical care and research.

The real key to prosperity is not limiting the number of workers or the pace of change in the economy—those are recipes for stagnation and disasters—but accelerating the pace of productivity growth to ensure that more and more people can afford the “must have” products we have grown so accustomed to. Trade lets a “thousand flowers bloom” as entrepreneurs and creative folks think up new things to stimulate our desires or fulfill needs we barely knew we had.

Growing productivity is the key to ever expanding wealth. More stuff for less labor is the key. And as long as we invest in greater productivity, the number of “jobs” and the amount of “work” available to people—good jobs at good wages”—is bound to increase, not decrease. Because the world of things we can do or desire is expanded, creating market opportunities and new forms of wealth.

Thus the key to a successful economy is not proper government management—except in terms of keeping the money supply stable and other such basic tasks—but just the opposite. Government should do everything it can to facilitate trade, not manage it. Trade and the freedom to trade are so basic to our wealth and well-being that they should be revered in the same light as other basic political rights.

And when they are, the magic of the marketplace will help ensure that supply of “good jobs at good wages.”