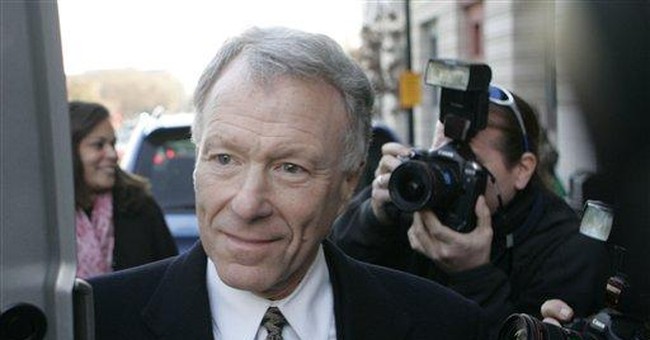 Unless you have been living under a rock lately, you’ve probably heard that Vice President Dick Cheney’s friend and advisor “Scooter” Libby has been convicted and faces jail time for…what, exactly?

Officially the charges were perjury and obstructing an investigation. But most of us have the sense that what Libby was accused of was leaking the name of a covert CIA agent in order to discredit her husband’s charges. In other words, Libby stands convicted in the court of public opinion of the kind of skullduggery that we associate with the Nixon White House.

That’s the Party line from Democrats when they comment on this case: “This verdict brings accountability at last for official deception and the politics of smear and fear," said Sen. John Kerry (Ma.), leading the charge; Senator Harry Reid added “It's about time someone in the Bush administration has been held accountable for the campaign to manipulate intelligence and discredit war critics."

But that’s not what happened at all, and the fact that the Democrats have been pushing this line for years now demonstrates how hollow their protestations against the “politics of personal destruction” really are. The Democrats, in fact, are the masters of that art, and Scooter Libby is simply the latest in a long line of Republican victims of their character assassination.

The fact first: Scooter Libby did not ever leak CIA agent Valerie Plame’s name to the media as part of a White House scheme to discredit war critic; in fact, it was a liberal war critic and notorious gossip who dropped the name with intentions no worse than to puff up his image as being “in the know.” There never was a nefarious scheme to discredit war critics in this manner. By now the White House should be regretting their failure to come up with a good conspiracy to discredit their opponents, given how vicious the Democrats have been in going after them.

In fact, the biggest liars in this whole affair have been Joe Wilson and Valerie Plame. Time and again, they have lied and distorted in order to hurt the White House, and of course turn themselves into liberal heroes. For their willingness to do so, they have been awarded rock star status in Democrat circles, and Plame has inked a $2.5 million book contract.

So if Libby didn’t mastermind a “vast right wing conspiracy” to slime Valerie Plame and her husband Ambassador Joe Wilson, just what did he do? Well, he didn’t leak the name, because Richard Armitage did that. In fact, what he did do according to the jury was try to cover up the fact that he may have confirmed to reporters what they already had gleaned from other sources, that Plame was at the CIA.

Confirming Plame’s CIA employment itself was not a crime; but covering up that he did so was perjury and obstruction of justice.

Just to be clear: Scooter Libby faces jail time for trying to cover up the fact that he did not commit a crime. In fact, at no time does the Special Prosecutor ever allege that the underlying crime he was investigating ever took place. It never happened.

Now I am not a lawyer, and I recoil at the idea of justifying Perjury and obstruction of justice by anybody for any reason. It sets a bad precedent to do so, which is why I was shocked by the Democrats’ defense of Bill Clinton’s perjury in the Monica Lewinski case. I personally think that Libby should not have been prosecuted, but I can understand why a Special Prosecutor might think differently.

Whatever the Special Prosecutor’s motives, though, one thing is perfectly clear: Scooter Libby is the victim of a well planned and well coordinated smear campaign by the Democrats—and the mainstream media—in order to discredit the Bush White House. The investigation was begun to find the perpetrator of a crime that never took place; throughout the investigation leading Democrats lied about what happened, what the investigation was about, and they are still lying about what the verdict means.

Democrats have become masters of the vile art of destroying individuals in order to further their designs for power, but they couldn’t achieve their goals without the active compliance of key members of the media. It was Tim Russert who hammered the nails into Libby’s coffin, and it is the New York Times which has relentlessly and shamelessly promotes the conspiracy theory that underlies the smear campaign.

The only reason why leading Democrats continue lying about this case is that the media doesn’t just let them get away with it, they actively encourage it. Saying or doing anything is apparently just fine as long as it might undermine a Republican administration. And threatening Republicans with jail is as a good a way as any to keep them away from political careers.

Leftists have been losing in the court of public opinion. In fact, one of the key factors in many Democrats’ victories last fall was the implicit promise that they wouldn’t act like liberals, raising taxes and sending spending through the roof. For decades the Democrats’ response to this is to pursue their agenda through the Courts.