Are You Afraid Yet? 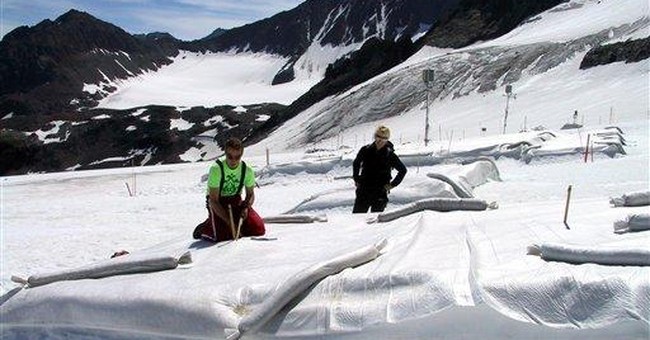 Are you afraid? Very afraid?

In just over a week, we are about to be treated to yet another Cassandra-style warning about the “fate of the earth,” this time from the International Panel on Climate Change.

It has become part of the background noise in our daily lives: the constant refrain that the world is rushing headlong into certain doom.

A doom, that is, that you will suffer unless you hand control of the economy and your daily lives over to the very elite that is warning of the impending disaster: the media, the left-leaning political class, and academics. As long as we surrender to the tender mercies of their magnanimity and good will, all might yet be well with the world.

When I was growing up, the crisis was the population bomb. The exponential growth in human population was inevitably leading us all into a bleak future of death, disease, and mass starvation. "The battle to feed all of humanity is over. In the 1970s and 1980s hundreds of millions of people will starve to death in spite of any crash programs embarked upon now. At this late date nothing can prevent a substantial increase in the world death rate..." wrote Paul Ehrlich.

Of course the population bomb blew up in Ehrlich’s face, and now most major countries in the developed world are faced with the economic problem of population decline and increasing obesity, not mass starvation.

But being wrong hasn’t stopped the doomsayers. There is always something to be very afraid of. In the 70’s it was Global Cooling, “limits to growth,” the energy crisis, and the yellow peril of Japanese economic expansion; in the 80’s it was nuclear power, nuclear war, nuclear winter, Alar on our apples, and the conversion of the middle-class into a vast cadre of homeless people; in the 90’s we were introduced to global warming, genetically modified foods invading nature, and the “vast right-wing conspiracy.” These days worries center on global climate change, the bird flu, and peak oil.

The evidence for anthropogenic climate change (man-made global warming to you and me) is said to be “overwhelming” and “irrefutable” in the copious amount of pre-publication press the new IPCC report is garnering.

Well, count me among the skeptical few.

It’s not that I know for certain that the IPCC is selling snake oil this time, because I don’t. In fact, I have no doubt that a number of brilliant scientists without a particular axe to grind are concerned about possible human-induced global climate change, and have been involved in researching the issue.

It’s just that the IPCC’s existence and funding are wholly dependent upon there being a “crisis,” and they have established a terrible track record in their previous 3 reports that should make all of us especially skeptical. In their last report they prominently featured the compelling “hockey stick” graph of global temperature over time. The graph showed a stable global climate for the past 1000 years, until men started to really muck it up in the 20th Century.

It made for a compelling visual—much as Paul Ehrlich’s demonstration that we were headed to certain doom in the 70’s and 80’s—but it was inconveniently and ridiculously wrong. The centerpiece of the 3rd IPCC report, it is now as thoroughly discredited as Ehrlich’s predictions of mass starvation. What makes this particular case of bad science was not only how obviously wrong it was (did no climate scientists notice the lack of the Medieval Warm Period or the Little Ice Age in the graph?), but how prominently promoted it was as “proof” of human-induced climate change.

That certainly doesn’t mean that the current IPCC report will be as flawed, but it certainly opens up room for more than a little doubt about whether the proof presented should “shock the world” into action, as the Chairman hopes.

The common denominator of all these recent predictions of doom is that we are told that there is only one way to prevent certain disaster: hand over our individual freedoms and control of the economy to a political elite. In the 60’s and 70’s Ehrlich suggested compulsory population control (a suggestion taken up by China), luxury taxes on cribs and products aimed at children, and the establishment of a government bureaucracy called the Federal Bureau of Population and Environment.

More recently we have seen proposals for carbon taxes, subsidies to favored technologies such as “alternative fuels,” stepped up urban planning to promote population density, forced recycling and greater and greater government control of the economy through taxes and subsidies in general. The content of the predictions themselves is irrelevant, the general solution is always the same: hand control of politics and the economy over to an elite who know what is good for us, and they will save you from yourselves.

In other words, hand money, power and fame to the few and they will reward you with your lives. Pretty much the same deal that feudal lords gave their serfs.

The prophesies of doom and gloom are just another version of a political and intellectual elite grasping for power. And of that, I would say, you should be very afraid.