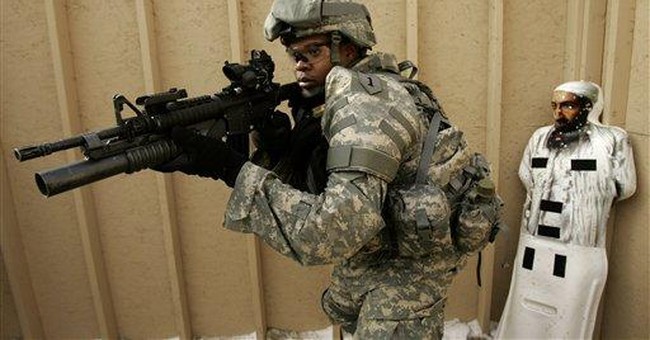 It may never fully have been true that “politics stops at the water’s edge, but that famous phrase coined by Senator Arthur Vandenberg to describe postwar unity has resonated with many Americans’ hopes for a united non-partisan foreign policy.

The idea is very simple: while Democrats and Republicans may have very different ideas on how best to achieve the common good within our borders, there shouldn’t be that much difficulty in agreeing on the basic foreign policy of the United States, at least when it comes to national defense and winning wars we are engaged in.

Vandenberg coined his famous phrase in what came to be known as “the speech heard round the world,” in which he foreswore his previous isolationism to join with the Truman Administration in pursuing its policies of the Marshall Plan, the establishment of NATO, and the beginning of the Cold War.

Our victory over communism in the Cold War was only made possible by the tacit agreement that on matters of foreign policy, politics would be trumped by national interest.

Compare Vandenberg’s leadership in the late 40’s to the Senators of today. Whatever you think of President Bush’s management of the Iraq War, and the War on Terror in general—I could give you a long list of mistakes that I think they have made—nobody could argue that the President has been able to pursue his policies in an environment of national unity even remotely similar to the one that obtained in the 40s and 50s.

Almost from the start of this conflict President Bush has been under constant political assault. After the terrorist attacks of 9/11, how long did it take for political opponents to begin the criticism of his handling of the incident and our subsequent response?

It seems that politics stopped at the water’s edge for about 10 or 15 days—perhaps an appropriate period for mourning, but hardly enough time to develop a consistent national defense policy against an existential threat to our nation.

These days there is no clear line between foreign and domestic policy battles in the minds of many politicians. Both are seen as venues within which it is appropriate to use the inevitable disagreements, mistakes, miscalculations, or even ambiguities that exist as fodder for political battles. In other words, there is no “national interest” outside of “my interest” in having and retaining power.

In this environment it is simply impossible to successfully conduct a war. Imagine World War II being fought under these conditions. The “Battle of the Bulge” could be seen not as a tale of American heroism with victory against all odds, but instead a tale of horrible blunders by American commanders and President Roosevelt. Imagine a history of the air war in Europe that focused on the stunning casualties (160,000 British and American casualties) and the often questionable results. Then there are the horrendous casualties suffered in the Pacific island battles. You can go on and on.

Bush has just outlined a new strategy for winning the war in Iraq. None of us knows if it will or can be successful. But there is absolutely no doubt in our minds, or the minds of our enemies, that the nation is not united behind Bush. A resolution has already been introduced in the Senate with the explicit intent of undermining his policy, telling Bush and the world—including our enemies—that there is little support for his policies.

"This resolution will give every senator a chance to say where he or she stands on the president's plan," said Sen. Joseph R. Biden Jr. (D-Delaware), Foreign Relations chairman. "The single and most effective way to get him to change course is to demonstrate that his policy has waning or no support from both parties."

Wars are won only when you break the will of your enemy to continue the battle. Winning a war requires convincing your enemies that there is no point in continuing to fight. Yet Senator Biden, the Chair of the Foreign Relations Committee, is spearheading a resolution that essentially assures our enemies that America is divided, and at least some of us would choose defeat over continued war.

In other words, we will give up. If not now, then soon. They win, we lose. That’s what the resolution really says.

Senator Lieberman put it succinctly: “In war, there are ultimately only two exit strategies, one is called victory and the other is called defeat.”

Our enemies are real. They don’t care whether Democrats or Republicans are in power here. It is the very nature of our regime that presents a mortal threat to their vision of expanding Islamic totalitarianism.

It is liberal democracy that presents a mortal threat to them, not primarily through force of arms but through the force of our ideas and our freedom. It is our television, our movies, our DVDs, and our magazines that threaten them much more than our troops, so driving us out of Iraq will be only a first step in their war against us. They need to defeat us culturally, not militarily, and terror is the weapon they intend to use.

We need to win this war—and by that I don’t just mean the war in Iraq—but the war against Islamic Fascism. And unless our politicians get serious about fighting the war against our real enemies, not George Bush, we may soon be wondering why the world has gone to hell.

We need politics to stop at the water’s edge again.