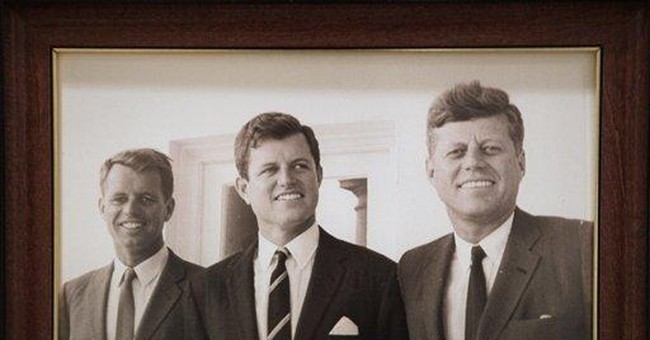 Whatever his obvious faults and flaws, it is somewhat understandable that Richard Nixon would ruminate about how Jack Kennedy got away with a lot during his assassination-shortened presidency. And there is no doubt that the 37th President of the United States saw all of the “Camelot” hype as mythology born of cynical public relations. While Nixon was being criticized for conducting a purported “Imperial” presidency by the likes of Arthur Schlessinger (a pro-Kennedy historian), he no-doubt resented the cult of personality that survived his old rival’s violent death.

RN would be 97 today—JFK would be 93 in a couple of weeks. It’s hard to envision the forever-young Kennedy as an old man, though we saw Nixon live into his 80s. They were friends at first, with Nixon the early-on transcendent figure. Then came the rivalry marked by increased and enduring bitterness. But it was always more complicated than that.

Americans too young to remember either man have been taught the party line that Kennedy was a great man and Nixon was a bad man. JFK was the hero of the Cuban Missile Crisis—Nixon was the villain of Watergate. JFK had charisma; Nixon had no charm—and so it goes.

The truth is actually quite different.

The History Channel is moving forward with production of an eight-part mini-series scheduled to air next year called, The Kennedys. Greg Kinnear (Little Miss Sunshine) will play JFK and Katie Holmes will play Jacqueline. The producer is a man named Joel Surnow, who is the creator of the highly successful and soon to expire series, 24.

Surnow is also reputed to have politically conservative tendencies (Gasp! Horrors!). Reportedly, the upcoming dramatic portrayal of the years of the New Frontier will include material about some of Kennedy’s flaws—and the guardians of his image are mobilized to “stop the smears.”

I say it’s about time that popular culture is exposed to the truth about the man behind the Camelot myth—before fact is fossilized.

The John F. Kennedy who will be portrayed in the new series will, reportedly, be a real life character—warts and all. And some of those warts had the potential to morph into cancer. In fact, there is a credible case to be made that had Kennedy lived beyond that fateful fall day in 1963, and managed to be reelected in 1964, he may not have survived a second term, legally and politically. That’s right. As Hugh Sidey suggested before his death in 2005—the same Hugh Sidey, who as an editor at Time Magazine during the Kennedy years, was also a Camelot insider—JFK’s various and sundry moral, ethical and judgmental pecadillos might very well have led to his actual impeachment.

Was the Kennedy administration a Watergate waiting to happen?

Possibly this new mini-series will popularize information that has long lain dormant in histories that are hardly read anymore. All the pieces of the puzzle are long established matters in the public domain—hiding in plain sight, but obscured by the powerful rays of cultish brilliance. But finally, those pieces are being assembled in a way that may accurately characterize a man who was likely guilty of actions much worse than what brought Mr. Nixon down in 1974.

From the improper use of the FBI in matters of surveillance and investigation in matters not at all related to national security, to misuse of the Secret Service, to his affair with a mistress of a major crime boss with its attendant compromises, Mr. Kennedy played by his own rules against the backdrop of the last gasp of an age of media mercy. He lived on the edge, from his monumental sexual addiction, to his experimentation with illicit drugs, to his dependence on substances that, while not illegal, seemed grayish—John F. Kennedy’s time was running out. People were always covering for him (some of the same ones still are). But was it only a matter of time before someone broke rank?

If Watergate taught us anything, it was that it is hard to keep a lid on a big story—even in the White House.

The story of Jack’s faults is, though, more than the tale of a bad boy—he may very well have compromised national security. Mr. Kennedy’s fascination in 1963 with an unfolding scandal in Great Britain likely had to do with the fact that he was beginning to worry about his own bailiwick. British Prime Minister Harold MacMillan’s government was then being rocked by a sex scandal involving one John Profumo, the Minister for War, and a notorious woman named Christine Keeler who had at least two boyfriends: Profumo and a Soviet naval attaché named Yevgeny Ivanov. And there were other women.

Why would this discomfit JFK? Well, because he had been flying rather close to the same kind of flame at the time. In fact, among the “other women” involved in the British scandal were two trollops, Suzy Chang and Maria Novotny. Both had been involved “romantically” with Kennedy. So it was quite possible that the scandal that eventually led to MacMillan’s government being voted out in 1964 might have by that time tarnished the name of the President of the United States.

Interestingly, while John F. Kennedy visited the United Kingdom and broke bread with MacMillan one Saturday in the summer of 1963, a story was beginning to break stateside. It appeared briefly in the New York Journal-American (Hearst paper) and spoke cryptically of “a man who holds ‘very high’ elective office” who was involved with some of the women being mentioned in the Profumo matter.

The story was pulled after one edition following pressure from U.S. Attorney General Robert Kennedy.

But beyond this, there was actually another “bimbo” problem plaguing JFK, and this one had to do with a German girl by the name of Ellen Rometsch. Said to strongly favor actress Elizabeth Taylor, she was a 27-year old prostitute who regularly “serviced” Mr. Kennedy in 1963.

The story went away, but not all that far away. Less than a month before Kennedy’s fateful trip to Dallas, one Iowa newspaper broke a story: “U.S. Expels Girl Linked to Officials.” In the article was the tidbit that this woman had been involved with “some prominent New Frontiersmen from the executive branch of the government.” But those were the days before White House reporters went for the jugular asking tough questions.

Why is any of this important now? It matters simply because there tends to be a measure of selective amnesia when it comes to iconic figures. If a myth better serves current political purposes this trumps truth.

Had John F. Kennedy lived and had his shortcomings been investigated and written about with Woodward-Bernstein-like passion, he may not have been reelected in 1964. And if he did manage to win that race, and investigators did their jobs, JFK might very well have been impeached or brought to the place of resignation.

Then again, that may be fantasy, because it was unlikely that Ben Bradlee, editor of the Washington Post in those days, and inbred Kennedy crony, would have allowed any such story to go forward. At any rate, it all went away that sad November day, and we are left with a legend that does history, not to mention the American people, a disservice.

Stephen Kronish is the screenwriter for upcoming mini-series, The Kennedys, and he insists that they are “not out to destroy the sacred cow.” But as Gene Healy, author of The Cult of the Presidency, recently wrote: “In an age when Americans periodically swoon for imperial presidents, a little sacred cow-tipping would be a public service.”