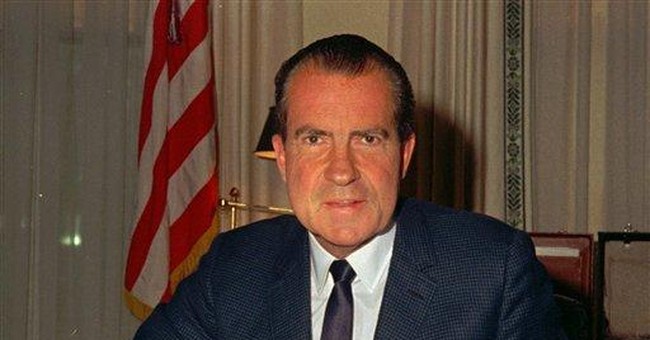 Nearly 65 years after his famous grandfather was first asked to run as a Republican candidate for the U.S. House of Representative from that state’s 12th district, 30-year old Christopher Cox has put his hat in the ring for the seat in New York’s first district on Long Island. Cox, the son of Edward and Tricia Cox, and grandson of the 37th President of the United States, Richard M. Nixon, is a fiscal conservative who champions limited government and lower taxes.

He also has politics in his blood.

And like his grandfather, who was swept into office as part of a Republican landslide in the 1946 off-year elections in the aftermath of World War II and too many years of “New” and “Fair” Democratic deals, he hopes to ride the current wave of discontent and frustration all the way to Capitol Hill. In doing so, he could make a little bit of history, as well. Cox graduated from Princeton and New York University Law School, and served as a John McCain delegate and was the New York State Executive Director of McCain's 2008 Presidential run.

New York’s first district encompasses Suffolk County, the eastern part of Long Island, with its signature north and south forks and places such as Brookhaven, Smithtown, and the Hamptons. The region is picturesque—still pastoral in part. Richard Nixon loved it out there, even writing his 1968 Republican nomination acceptance speech at Gurney’s Inn in Montauk.

Edward Cox, Christopher’s father, is the current chairman of the New York Republican State Committee. His ancestors were well known in state and local politics, business and jurisprudence—and his own political resume includes experience as an attorney in the Reagan administration.

Of course, those of us old enough to remember recall the images of a beautiful White House wedding back on June 12, 1971, as Ed took Tricia Nixon as his wife.

Should Christopher Cox get the GOP nomination, he’ll face an uphill race against the Democrat incumbent—Tim Bishop, who has held the seat since 2003. Interestingly, in spite of the fact that Bishop trounced his opponent in 2008 by 16 points, Barack Obama only garnered 51% of the district’s vote in 2008—a rare case that year of a local Democrat out-polling the “Yes, We Can” national juggernaut. So, to many observers, certainly Chris Cox among them, the seat is very much in play.

It’s been said that history doesn’t repeat itself, but it does rhyme. The year was 1945, and a young Naval officer was transferred that January to a post in Philadelphia after his tour in the South Pacific. He and his wife contemplated their post-war future. Richard and Pat Nixon also awaited the arrival of their first child.

In September of 1945, while still on the east coast, Richard Nixon received a letter from Herman Perry, a Whittier, California banker, inquiring: “Would you like to be a candidate for Congress on the Republican ticket in 1946? Jerry Voorhis expects to run. Registration is about fifty-fifty. The Republicans are gaining. Please air mail me your response if you are interested.”

The rest, as they say, is history—but none of it was a foregone conclusion.

The seat had been held since 1936 by Jerry Voorhis, a sometimes-New Deal—sometimes further left— Democrat, who had long been covered by Franklin Roosevelt’s electoral coattails. He had made a career attacking insurance companies, oil companies and banks—even going so far as to advocate the funneling of all profits from the Federal Reserve System into the Federal Government’s general revenues.

Nixon quickly sized up the situation and the offer and replied: “I feel very strongly that Jerry Voorhis can be beaten, and I’d welcome the opportunity to take a crack at him,” promising “an aggressive, vigorous campaign.”

In fact, Nixon made good on his word and took the fight to Voorhis in 1946. Facing a tough and effective speaker and campaigner, Voorhis was put on the defensive right from the start and never really figured out what to do. During debates with Nixon, one observer said that Voorhis, “pauses, breathes heavily, adjusts his glasses nervously with both hands, etc.,”—this was contrasted with Richard Nixon’s bold style and manner.

Of course, down through the years, the story of the 1946 campaign, as told by many Nixon detractors, has been that it was dirty and underhanded. But, as one biographer has written:

“Politics is a rough occupation, and Voorhis had led a sheltered life. He should have seen Nixon coming and responded more effectively and promptly to his attacks… It was not an edifying example of clarity of political debate at its best, but it wasn’t the infamous prostitution of the political process that Nixon-haters have sold to a drooling posterity either.”

On election night, Nixon basked in the glow of victory after winning 57% of the vote. He would regularly say over the remaining years of his life that every election win was special—but that first one always remained the most vivid and rewarding. He, Pat and their nine-month old little baby girl, Tricia, were on their way to Washington, where they’d all (joined by little sister, Julie, less than two years later) live for 20 of the next 28 years.

In early 1947, as Richard Nixon began serving in Congress, he made his way to a debate in McKeesport, Pennsylvania. The subject was American labor, particularly the merits of the Taft-Hartley Bill. His opponent was also a former Naval officer, who had also been elected in November of 1946—one of the few bright spots for the Democrats during that otherwise discouraging night. His name was John F. Kennedy.

JFK would later concede that Nixon bested him that night. They left the stage, had dinner, and then shared a compartment on a train back to Washington talking into the morning hours about life, politics, the past and the future. In fact, those two young men on a train, Nixon at 34 years of age, Kennedy not yet 30, would figure significantly in the future of the nation. They were young men in a hurry—part of a new generation of leaders.

These days we watch another class of young politicians testing the waters. John F. Kennedy, Jr. died tragically, long before we could ever see him run for office. His big sister, Caroline, made an awkward attempt to get Hillary Clinton’s vacated Senate seat, but never seemed to catch on—or up. Now the torch has been past to an even newer generation as Tricia’s son, Christopher, runs this year.

It will be very interesting to watch—and remember.

David R. Stokes is an author, columnist, broadcaster, and Senior Pastor of Fair Oaks Church in Fairfax, Virginia. His radio broadcast is heard at 2:00 p.m., Monday-Friday on WAVA (105.1fm) in Washington, D.C. He is the author of “APPARENT DANGER: The Pastor of America’s First Megachurch and the Texas Murder Trial of the Decade in the 1920s” which will be released Spring 2010.