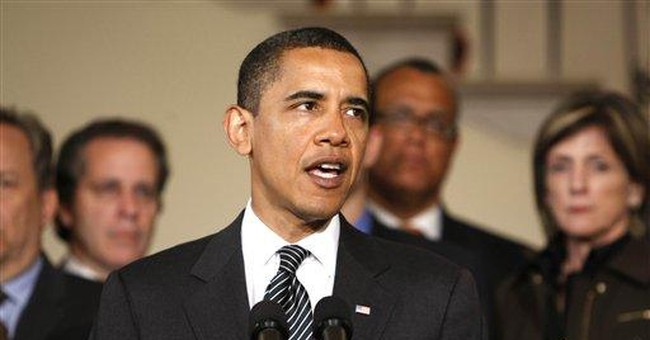 It was some enchanted event.  While Dr. Seuss-like journalists lobbed sophomoric softballs President Obama’s way last Wednesday night, Mr. I-Never-Met-A-Teleprompter-I-Didn’t-Need managed to unintentionally juxtapose two polarizing issues in an ironic and upside down way.  He was right about what he said.  But answer “B” better fit question “A,” and vice versa.

After answering the predictable torture question: “I would not torture in a jail; I would not torture with a pale,” the president later was asked about the issue of abortion.  He gave what could only  be called a “tortured” response (pun intended).  He spoke of how those on the pro-choice side of the issue “make a mistake when they – if they suggest – and I don’t want to create straw men here, but I think there are some who suggest that this is simply an issue about women’s freedom and there’s (sic) no other considerations.”  He went on to describe the matter as “an issue people have to wrestle with” and that it is a “moral issue and an ethical issue.”

Or call it a case of selective righteousness.

He’s clear cut and dogmatic on the correctness of his view about not using “enhanced interrogation techniques” even in circumstances that might obtain life saving information from really, really bad people.  But he’s “aw-shucks-it’s-a-real-toughie” about ending the life of the most innocent and precious.

He’s got his upside downs all mixed up.

As he talked about the torture issue, President Obama waxed reflective and cited an article he had recently read quoting Winston Churchill during the ferocity of the blitz as saying, “We don’t torture.”  The president suggested that “Churchill understood – you start taking shortcuts, over time, that corrodes what’s – what’s best in people.  It corrodes the character of a country.”

“Well” - as Ronald Reagan might say while flashing his contagious grin - “There you go again, Mr. President.”  Articles and blogs can make good reading (this one, for example), but I suggest that Mr. Obama might be better off spending some time with an actual full-length biography of the rotund Briton.  Presumably he’d have to dispatch an aid to a bookstore for such a volume.  Likely all Churchill references in the White House during his predecessor’s administration have been sent back to London in a crate marked, “Churchill Bust and Books – Yes, We Don’t Need.”

You see, while Mr. Churchill may have uttered a choice opinion or two on torture, he was known to change his mind on occasion (even his party).  He also could wrap the truth in a riddle or enigma.  Bear in mind that he was the guy who said famously, “In wartime, truth is so precious that she should always be attended by a bodyguard of lies.”  The kind of war being waged in the 1940s was vastly different from our current experience.   In other words, ticking time bomb analogies don’t really work when looking at back then.  The bombs were always ticking – and falling.  Duh.

Yet, there is evidence that, in fact, torture did go on as part of the British World War Two effort.  There is the story, for example, of  “The London Cage,” a special operation run by MI19 (they were tasked with getting vital information from prisoners of war), housed at the posh Kensington Palace Gardens.  Written reports based on information in the National Archives across the pond tell of more than 3,500 men being “processed” through the highly secretive “torture center,” even while Churchill was opining against torture.

How intense were interrogations in the “cage?”  One written complaint found in the archives – from a German journalist who had also spent sometime under Gestapo “supervision” - talked about how much better he was treated by the German police.  Do the math.

What is interesting though, is that Winston Churchill was the consummate warrior who regularly expressed a willingness to do what was needed to win a battle or war.  Another example of his “whatever it takes” approach was when he, filled with fear that the Germans were working on a biological weapon, tried to persuade Uncle Sam to develop an extensive germ warfare program in 1942.

Churchill also contemplated the idea of trying to bring the war to an end in 1944 via bombs that would release anthrax, only to be disabused of the notion by his generals.   And, of course, there is the strange case of Rudolph Hess, Hitler’s crony, who jumped out of a plane over Scotland on a mysterious mission, only to be rebuffed by the Prime Minister who quipped, “Hess or no Hess, I’m going to watch the Marx Brothers.”

How cool was he?

Later though, Churchill – who desired to keep Hess’ presence and purpose away from a surprisingly powerful “peace party” – one that sought to oust him from 10 Downing Street – had Hess locked up for the duration of the war.  Think: Gitmo for one.

As Charles Krauthammer writes, the use of “enhanced interrogation techniques” – while certainly something that makes all decent people uncomfortable – can and should be permissible under two narrowly specific circumstances: the proverbial “ticking bomb,” and to glean information that will save lives.  To take this option off the table is at best naïve and at worst foolish.  At any rate, whatever Churchill said about torture, does anyone at all acquainted with the history of those days really believe he meant it – or that his enemies believed him?

President Obama has it all backwards.  The taking of innocent human life via abortion should be the black and white moral issue that helps define national righteousness.  It’s torture that should be “rare, but legal.”  This would make for a better and safer world.