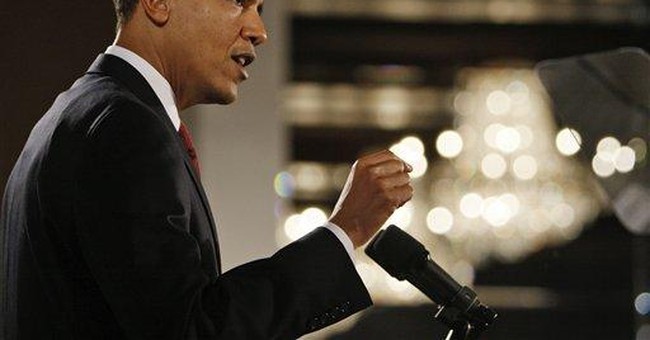 During recent remarks to the Hispanic Chamber of Commerce, President Barack Obama waxed a bit defensive in response to mounting criticism that he may be spreading himself, his vision, and his obvious political capital too thin in these early days of his administration. He is calling for reform in our health care system, the same for education, while ending torture as the bad guys have known it, opening the stem cell floodgates on an ethical slippery slope, while trying to fight two wars and fix a troubled economy. We may be witnessing the birth of the modern octo-presidency.

To his credit he is being very up front about his agenda, not to mention consistent with much of what he campaigned about en route to the presidency. I am sure his actions are being met with enthusiasm by the diehard portion of his electoral constituency. However, I am also quite confident there are some who voted for him who really didn’t expect him to be so aggressive toward the left, but rather to lead more from the center. Wherever that is.

To answer his critics – and those who support him but are somewhat concerned about the potential for early-administration-burn-out – he told the crowd:

As during the campaign and ever since – and we can assume it will be the same for the foreseeable future – when the going gets tough President Obama pulls out his favorite triumvirate trump card. The names of his historical bff’s Lincoln, Roosevelt, and Kennedy are always near the tip of his eloquent tongue. And why not? After all, they have always been seen as like the coolest presidents ever.

Mr. Obama is, by all accounts, a brilliant guy. Years ago, he was the editor of Harvard Law Review – so he knows a thing or two about something called precedent. What he seems to have missed during his recent speech is that the cases he cites to bolster his argument in favor of him being the multi-tasker-in-chief are not exactly on point.

In fact, when closely examined, they are not relevant at all.

There is no indication that Abraham Lincoln spent any significant time on the railroad issue during the early weeks and months of his presidency as the country was falling apart. In fact, various bills on the subject had been languishing in Congress since the administration of Franklin Pierce, and when Lincoln signed the Pacific Railroad Act into law on July 1, 1862, he had been president for more than a year. Some biographies of our 16th president don’t even mention it. Doris Kearns Goodwin, who wrote Team of Rivals: The Political Genius of Abraham Lincoln, devotes part of one single sentence to it in her tome about Honest Abe. I think there are copies of this book around the White House these days; it’s the hot Lincoln book right now. I wonder if anyone looked it up? In fact, the biographer describes the signing ceremony as one where Lincoln signed several bills “rushed through in the final days of the term” of Congress. By the way, he signed the Homestead Act in law during that same quickie ceremony.

Sure life went on and Lincoln had to step away from his number one priority and do other stuff, but nothing got his attention like the raging war.

Then there’s good old Franklin Delano Roosevelt. Mr. Obama tells us that FDR “didn’t have the luxury of choosing between ending a depression and fighting a war.”

Sure he did. He had at least five years and was well into his second term, and dealing with a second Depression of his own making, before he had to begin to seriously look at what was happening in Europe and Asia around 1938. All one has to do is glance at the calendar to note that there was a long gap between his “fear itself” speech and the one that started “Yesterday, December seventh, nineteen-forty-one…”

In fact, a great argument can be made that had it not been for war clouds on the horizon, Mr. Roosevelt might not have been reelected to an unprecedented third term in 1940. The economy was in shambles and the president had recently overreached to try to pack the Supreme Court. World War II saved him politically.

It also cured the Great Depression.

So, Mr. Obama is stretching history some to make it fit his situation when he brings Abe and FDR into the discussion - but what about John F. Kennedy? Well, here again the president swings and misses at a curve, when he was looking for the fastball.

Obama said: “President Kennedy didn’t have the luxury of choosing between civil rights and sending us to the moon.” Yet history tells us that how JFK dealt with these issues, one a long-standing wrong, the other a long-range goal, is not really a precedent our current president should use to enhance his argument.

The fact of the matter is that the space program itself, not to mention the idea of sending a man to the moon, was not something Kennedy had much real passion about. It was never part of his campaign for the presidency. As a senator, he tended to agree with President Eisenhower that the space program was waste of money. It was the chronic and often annoying enthusiasm of Vice President Lyndon Johnson that wore JFK down. Of course, Johnson’s interest had much to do with the fact that NASA was headquartered in Houston, Texas.

When the Russian Yuri Gagarin went into space in April of 1961, it pushed Kennedy’s Cold Warrior buttons. This was, of course, right around the time of the Bay of Pigs fiasco. It is important to note that much of the passion for putting a man on the moon flowed from his desire to beat the Soviets. And John F. Kennedy did not really buy into the idea of it all until shortly before he spoke to Congress on May 25, 1961 about “landing a man on the moon and returning him safely to the earth.”

It was as much political posturing and theater as anything else.

In fact, according to presidential biographer Richard Reeves in President Kennedy: Profile of Power, just two months before his prime-time announcement about going to the moon, Kennedy told James Webb, the head of NASA, “that he had decided against giving new funding to Project Apollo. The American moon project was to be put on hold.”

This is hardly something to compare with some of the “core-Obama-values” stuff our new president is promoting. Kennedy simply used the space program as a Cold War weapon.

How about JFK and civil rights? Surely some would think that Kennedy really worked hard on that one. But again, the record says otherwise. He simply didn’t – at least early on in his administration – have much fire in the belly for the issue. Reeves wrote: “In fact, Kennedy was most concerned about domestic racial troubles as a foreign policy problem. He didn’t want to see the problems give the country a bad name abroad.”

Kennedy’s preoccupation with international affairs is often cited as the reason he was actually, at best, lukewarm on the issue of civil rights during his administration. He was, in the words of author Nick Bryant, “The Bystander” – a leader who squandered opportunities. It would fall to President Lyndon Johnson to follow through, by that time having full access to political capital generated by the emerging Camelot myth.

At any rate, when Mr. Kennedy did begin to step up on the issue of civil rights – as with his address to the nation in June of 1963 - he was more than two years in to his presidency. How this at all relates to President Barack Obama’s ambitious and multi-faceted agenda right now is not clear at all.