Are "Better Angels" All Socialists? 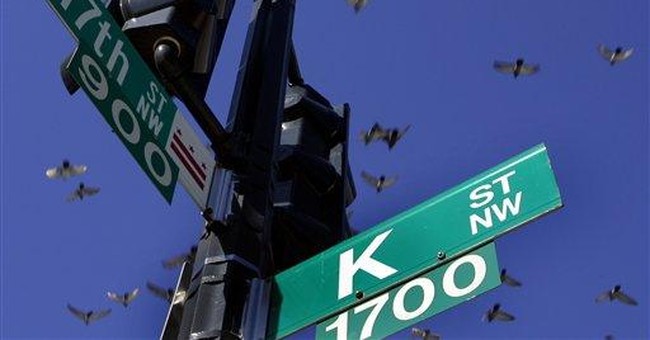 G. K. Chesterton used to say that the idea of “original sin” was “a fact as practical as potatoes” and “the only part of Christian theology which can really be proved.”

As the nation-at-large wrestles with monumental problems, there are many who advocate strategies that rely on what is often referred to liberally as “the essential goodness of people.” The idea being that given a fair choice and level playing field people will generally do the right thing.

As Dr. Phil might ask: “How’s that working for you?”

I certainly believe people can rise up and do good things following what President Barack Obama, quoting Abraham Lincoln, is fond of calling our “better angels.” But the truth is that the default position of human behavior actually falls short of the ideal. Various forms of theology explain this propensity in terms of “original sin” or “total depravity” – that we are wired with a spiritual-genetic flaw.

In other words, the very suggestion of the existence of “better angels” in our nature implies other “less-than-better angels” – putting it mildly; or maybe “fallen angels.” The mention of better begs the question: “Better than what?”

Some people will dismiss this kind of thinking as puritanical. But it’s sort of like a paraphrase of that old Marxist line (Groucho, not Karl): Are you going to believe them or your own two eyes? Empirical evidence abounds that people tend to follow paths of least resistance and worse.

We are in this mess now because many people either made unwise choices (rejecting personal responsibility or deferred gratification), or they were manipulated and deceived by predators. Others on a certain street in lower Manhattan exploited everything. All of this while Barney Frank kept an eye on things. Clearly, any angels in attendance weren’t of the “better” variety.

All sins great and small flow from the same polluted human nature stream, whether they are grave and life destroying in our eyes or relatively excusable in today’s “I-did-it-because-I-am-a-victim” world. The lack of integrity that leads some to break a vital covenant and others to commit abhorrent crimes are connected to the same ugly ancestral disorder.

For example, we are witnessing a surge in bank foreclosures and people are losing homes. What is being little noticed though, is that while it is true some have lost jobs and can’t pay, there are cases where some who really could pay have stopped making payments and are deciding to walk away unless the government makes it easier for them. The home is now “less attractive” than it once was as an investment. Some are walking away only because they are upside down – not because they really can’t pay.

Stay tuned taxpayers. Keep your eyes on the funds and mechanisms as they become available to help people catch up on, or renegotiate, mortgages. I predict that some people will still simply choose to walk away, in spite of help available, because their homes just won’t be worth it in their eyes. In many cases, it may be more about the value of a home than the ability to pay.

Won’t it be interesting if money to help some people “stay in their homes” winds up going unused because, when it comes right down to it, they don’t really want to stay after all? Is being behind on payments the big problem (certainly it is for some), or is being upside down the big deal? There is a difference between catching up and getting out from under.

Upside down may be becoming an excuse to move from inside out.

In many places there is a scenario called “buy and bail.” This is where someone buys a new – cheaper – home, while still in the original dwelling. Then once the deal is done – they walk away from the first, more expensive home. Admittedly, this practice is not widespread now, largely because some states have cracked down on it.

What we do know is this, when homes go empty for whatever reason it hurts everyone who is trying to really play by the rules and keep their word. Upside down/walk away homes on an already depressed market contribute to the downward spiral of home values and prices – damaging those who believe that when they signed the mortgage they made not only a financial commitment, but a moral one as well.

If liberal-bail-out-advocates really believe in the “greater good” and “spreading the wealth,” they might want to consider that the wealth they want to redistribute is actually disappearing because of the “help” they are providing. People who made bad choices in the first place are being encouraged to continue doing things that hurt everyone. How is this about the greater good?

While we are trying to figure all this out, we meet a lady named Nadya Suleman. She recently gave birth to eight children. She’s been all over the news and now we hear she is looking at a new million-dollar-plus-pad for her growing family. I haven’t figured out whether she is a caricature or a metaphor. Maybe she’s both.

Of course, the Suleman story is objectionable and infuriating to us on so many levels because she clearly seems to be deranged. Or maybe she is just depraved. Maybe she is a manipulative, scheming, deceiver, who is thinking only of self. I am not trying to bash the lady – that line is really too long.

After all, if OctoMom, as she has been dubbed, is indeed trying to “work the system” with the mother of all scams (literally), is she really all that different from many others right now? I’m talking about those who are already slowing down on the personal responsibility side of things because we have a cool new government in place ready to stimulate all of us. Nadya Suleman may be more like the not-too-distant future of America than we might care or dare to admit.

Here’s where “original sin” comes in. Like it or not, we all bear a moral-DNA similarity to OctoMom, in the sense that we have this natural propensity to be selfish and deceitful. It is only as this part of us is restrained (by law, fear, inspiration, or love) or transformed (by grace – or, if you prefer, “a higher power”), that we can function in any effective social-contract sense.

Russian novelist Fyodor Dostoevsky said, “If there is no God, everything is permissible.”

There is a lot of talk these days about America becoming socialist and more like Europe. What needs to be noticed is that these trends not only have to do with the size and role of government, but also speak about a culture moving toward dominant secularism and sterile religion.

I ate at a restaurant the other day in Manhattan. It was in a beautiful building that had once been a thriving church. It was a church; now it is an eatery. Then I thought about how so many of the churches in Europe function basically as museums, if at all. Is this where we are headed?

One of the basic differences between socialism and capitalism as they manifest themselves in social, cultural, political, and even religious senses, is that the former believes in the essential goodness of humanity. On the other hand, capitalism tends to be more realistic about basic human nature and works to channel that “self-interest” in ways that can lead to something better for everyone.

Of course, human nature is at fault in runaway capitalism and the excesses of a few can be detrimental to many. This is why very few conservatives these days advocate a radical form of laissez-faire capitalism. Human nature will take advantage and there have to be times of balance, judgment, adjustment, and reckoning.

Somebody does have to watch the store. But the store should be privately owned.

The thing Americans need to be thinking through these days is, however, what system has a better overall record? Is it really better in France, Sweden, or Denmark than America today? Do we really want to admire nations where people surrender significantly more than half of what they earn to a government in exchange for state-run services that are chronically insufficient, incompetent, and impersonal?

If so, then we need to be fair and concede that, as Pogo might have put it, we have met Nadya Suleman and she is our future.