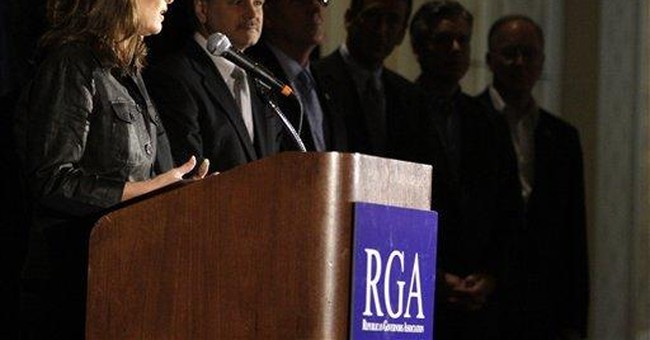 The Grand Old Party of Lincoln, Teddy Roosevelt, & Ronald Reagan, has entered the proverbial wilderness.  It moves from the box seats to the cheap seats, or better - to mix the metaphor a bit – the backbenches.

How Republicans handle this exile, and just how long the era lasts, will depend largely on what is done with and in the wilderness.

The idea of a wilderness period as a picture of exile is actually much older than American politics or even anything from our ancestors across the pond.  It is a concept dating back to Biblical history and the frustrations and wanderings of the ancient children of Israel.  Poised to enter the “Promised Land” of abundance and fulfillment following centuries of bondage and privation, and in the wake of the clearly providential exodus led by Moses, that generation fell tragically short.

They missed their rendezvous with destiny.

Entering the wilderness – a place, but also a process – they lived out a forty-year reminder of what had been left behind, while also grieving the loss of a compelling future.  They had allowed short-term frustration to short-circuit long-held principles and dreams.

And the Lord told them in the book of Deuteronomy that the reason for the wilderness was, “to humble you and test you, to know what was in your heart.”  In other words, the wilderness for them was a divinely ordained “time out” – the kind of thing my dad would do when he sent me to my room to “think about” what I had done (when it was really all my brother’s fault).

The wilderness was a time for purging and preparing.  Attitudes, habits, and ambitions had to be dealt with, and priorities revisited and clarified.  The duration of the wilderness depended on how well the lessons were learned.  In that ancient case, a journey that should have taken no more than a year became a forty-year generational failure.

And something that was lost, forgotten, or just misplaced, desperately needed to be found.

As the Republican Party moves into its own desert of exile for a while, it is time for reflection.  It needs to figure out what it really stands for and what it can offer the nation the next time it is called upon to lead.  How it manages in the wilderness will determine whether it will come back in four years, or forty - if at all.

That another such time will come is, of course, almost inevitable – not just because of very real concerns about the capacity of recent victors to translate historically flawed policies into real success, but because of the inherent cycles of politics.   What happened on November 4th was due nearly as much to the tendency of politics and history to repeat themselves and the public’s tendency to soon tire of anyone on center stage, as it was a mandate for real “yes, we can” change.

Writing in the book, In the Arena: A Memoir of Defeat and Renewal, the late and former president Richard Nixon dedicated a chapter to the phenomenon of the wilderness.  He knew a thing or two about the ups and downs and ins and outs of political life.  The period between his loss in the governor’s race in 1962 and the winning of the White House in 1968, is a textbook case of how to come back from the kind of defeat that tempts opponents to write someone off permanently.

Nixon mentioned something described by Arnold Toynbee in his, Study of History, described as “the phenomenon of withdrawal…a disengagement and temporary withdrawal of the creative personality from his social milieu and his subsequent return to the same milieu transfigured in a new capacity with new powers.”  Throughout history, great leaders demonstrated this.  Certainly Nixon did and clearly identified with others who went through deep valleys.

In the 1991 movie, City Slickers, Billy Crystal and his best friends head out west looking for adventure.  Crystal’s wife in the film wanted him to, while moving cattle from point A to B, along the way find something.  Something he had lost.  Something he needed to recover.  His smile.  The movie ended happily with said smile finding its way back to Billy’s face.

For the Republicans, they do not need to find something as insignificant as a group smile.  Rather, they should be looking for something much more vital if they are to have a real shot at coming back from this wilderness.

The key to this is found in another place where the ancient scriptures mention a wilderness.  We learn about this from the writings of the prophet Isaiah, when in the 40th chapter of his book we come across the vital phrase, “the voice of one crying in the wilderness.”

No doubt Winston Churchill, another frequent wilderness wanderer, identified with this little phrase during his years as a political has-been in the 1930s.  He had no power, no position, and no prospects.

But he found his “voice” – and began to warn his countrymen about Hitler and dangers to come.  Later, when he once again found himself in forced exile, having been voted out of office in the Labor sweep just a couple of months after the victory had been won in Europe, he found his “voice” again.   This time he did not speak in the House of Commons, but rather in the gymnasium of a small college in the American mid-west.  From that unlikely pulpit in the wilderness he cried out about an “iron curtain.”

The Republicans have clearly found the wilderness.  Now they need to find their voice.

The GOP needs to figure out what it wants to be if and when it grows back up.  Are ideas like limited government, the free market, and at least an interest in understanding the relationship between the morality of personal responsibility and self-discipline and the ills of the larger culture – now officially gone forever?

The word paradigm comes from the Greek language and the word paradeigma.  It basically means a perception, or frame of reference – a lens through which to interpret reality.   Author Steven Covey in his book, The Eighth Habit: From Effectiveness to Greatness (hint: the eighth habit is “finding your voice”), insists that “if you want to make minor incremental changes and improvements, work on practices, behavior or attitude.  But if you want to make significant, quantum improvements, work on paradigms.”

The time for tweaking is past.  As the nation readies itself to enter a new era of “bold experimentation” under an activist Obama administration, it is time for the party now finding itself in the political wilderness to find what it has lost.  By definition, something lost is not something new – it is something once possessed.

Republicans can find their voice during the wilderness period, but to do so will require a willingness to have the wisdom and humility to make a paradigm shift, one that surely involves a quantum journey back to the future.  The must find what once worked – and has been lost.

And if anyone thinks that the idea of going to the past to find something that will resonate in the future is not politically feasible, please remember this: America just elected a guy who advocates policies and programs that failed 75 years ago.