FDR and the Great Deflation 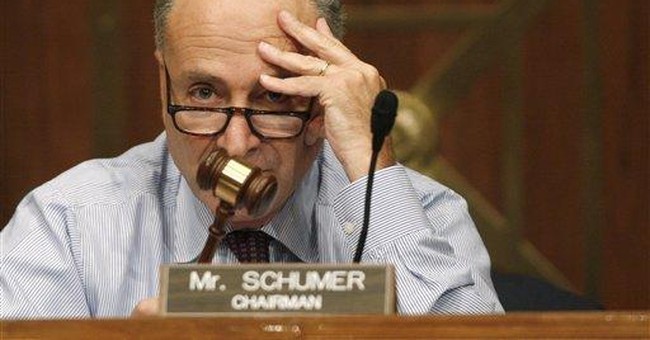 The period between late 1929 and the beginning of the 1940s is, of course, known as the Great Depression.  But in a real sense, it could be called the Great Depressions.  There was more than one massive downturn in all things economic during those days of deprivation.

Five years after Franklin Delano Roosevelt spoke so eloquently about “fear itself” - and then began to fulfill his promise of  “experimentation” (as opposed to an actual plan), things were really no better than the day he took office.  His “hundred days” of frenetic legislation gave way to years of false starts and faded hopes.

In early 1938, unemployment was at the 1931 level of 17.4 % and the Dow Industrial Average – at 121 - was still less than half of its 1929 high.  The Dow would not actually return to pre-crash levels until Dwight D. Eisenhower was well into his first presidential term.

Amity Shlaes, in her fascinating book – a must read these days – The Forgotten Man: A New History of the Great Depression, gives us a snapshot of the situation half a decade into the politics, policies, and promises of the New Deal:

“The country was now at an odd moment.  There was a new sense of permanence about the Depression.  Being poor was no longer a passing event – it was beginning to seem like a way of life.”

What started as a panic in 1929 soon morphed into something more sinister, deadly, and often overlooked: deflation.  As money became scarcer, prices fell. Declining prices, if allowed to continue for long, tend to lead to a dangerous downward spiral of negatives – things like falling profits, closing businesses and factories, shrinking employment and incomes, and increasing defaults on loans by companies and individuals.

Deflation is the monster – the category 5 economic storm – to watch out for and guard against.

Early on during the Great Depression, housing values, though not starting the problem, became a leading indicator of the severity of the crisis.  As prices moved down, homeowners found themselves with homes worth less than the mortgage amount.  This led to a deflationary meltdown.

There are two knee-jerk things that both Herbert Hoover and Franklin Roosevelt did that actually ensured that the Depression would have a long run.  First, Hoover stifled free trade when he, against the advice of many economists and business leaders, signed a protectionist tariff  (Smoot-Hawley) bill.  He ignored doomsday warnings that this “would spell economic isolation” and lead to the “most severe depression ever experienced.”  Sadly, those warnings came true.

And both Hoover and Roosevelt fought the Depression by raising taxes.

Mr. Hoover gave us the Revenue Act of 1932, which burdened people already having a hard time holding on to homes and making ends meet.  With deflation, dollars were worth more, so the government was taking these increasingly rare and more valuable dollars out of the hands of the people, in many cases sealing their financial doom.

Franklin Roosevelt wanted to change society through tax policy.  He seldom met a tax he didn’t like.  The president clearly cultivated his image as an enemy of the “great accumulation of wealth” and the protector of the “people” from corporations, utilities, and other usual suspects who become convenient rhetorical targets during times of economic crisis and confusion.

As the Great Depression lingered, Americans languished.  Washington tended to do the wrong thing at the wrong time.  As people watched the president, with a complicit Congress, raise taxes they wondered: “With business so hard, why make it harder?”

Conventional historical wisdom – the legend and lore of days gone by – suggests that Hoover was a “do-nothing” president who fiddled (better: fished) while the country burned.  Then came Roosevelt on his white horse – a man of action (like his distant relative who also served as president).  He saved the nation – and everyone lived happily ever after until he had to save us again – from the Nazis.

But, as Shlaes points out, the two men actually had much in common:

“Hoover and Roosevelt were alike in several regards. Both preferred to control events and people.  Both underestimated the strength of the American economy.  Both doubted its ability to right itself in a storm.  Hoover mistrusted the stock market.  Roosevelt mistrusted it more.

Both presidents overestimated the value of government planning.

And both men doctored the economy habitually.  Hoover was a constitutionalist and took pains to intervene within the rules – but his interventions were substantial.  Roosevelt cared little for constitutional niceties and believed they blocked progress.  His remedies were on a greater scale and often inspired by socialist or fascist models abroad.”

Deflation impacted the American worker the hardest.  In times of even moderate inflation wages increase (along with prices).  But during a deflationary cycle, wages either remain the same, or drop, or worse - disappear entirely.   It brings to mind one of the more morbid sayings from those days: “The Depression isn’t that bad if you have a job.”

The fact is that the crash of 1929 did not cause the Great Depression – at least, not right away.  The precipitating force triggering the cascading crisis that gripped the world back then was deflation, something that Hoover overlooked – and Roosevelt missed completely.

So – why, then, was FDR elected four times?  Well, in 1932 he was just plain better at campaigning than President Hoover – and people were upset and wanted change.

In 1940, the storm clouds of war certainly worked in Roosevelt’s favor.  And by 1944, the people were not going to vote a sitting president out of office during a time of war (bearing in mind that an overwhelming number of Americans supported the war effort).

1936, though, is an enigma.  Amity Shlaes suggests that FDR invented a “new kind of interest-group politics.”  Many Americans became part of a movement that “demanded something from government.”   Also, the initiatives developed during Roosevelt’s first term increased federal spending.  For the first time in our nation’s history the national government spent more than all the states combined.

And 1936 was really the first election year where federally driven entitlements – a persistent challenge ever since – were part of the national experience.   Enter the politics of the trough.

In other words, Franklin Delano Roosevelt was successful because he convinced enough people he was trying to do something for them.  The record shows that he did not really do all that much, but such facts tend to fall short when countered by a compelling narrative.

“Bold, persistent, experimentation,” that’s what Mr. Roosevelt promised on day one of his presidency.  One wonders if anyone could be elected today by saying, in effect, “I will keep making stuff up until something works.”  But FDR was actually that good at politics.

As an example of FDR’s experimental economic savvy, one day he announced to his staff that he was considering raising the price of an ounce of gold by twenty-one cents.  When someone inquired as to the rational behind that figure the president replied: “because it’s three times seven.  It’s a lucky number.”

Imagine what Oliver Stone could do with Franklin D. Roosevelt if he gave it a try.